Student Molly at the potter’s wheel (Photos by Theresa Goodwin) 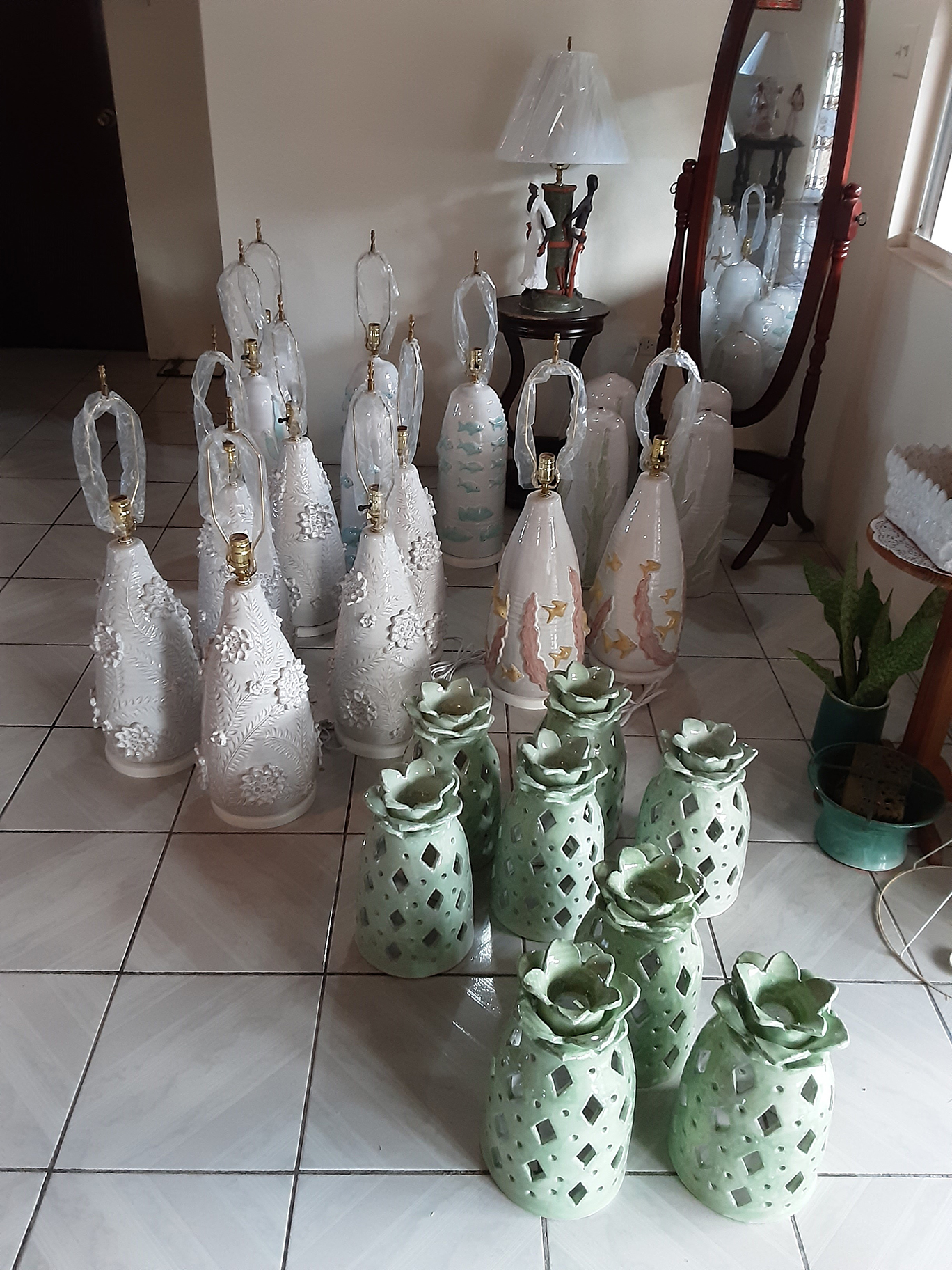 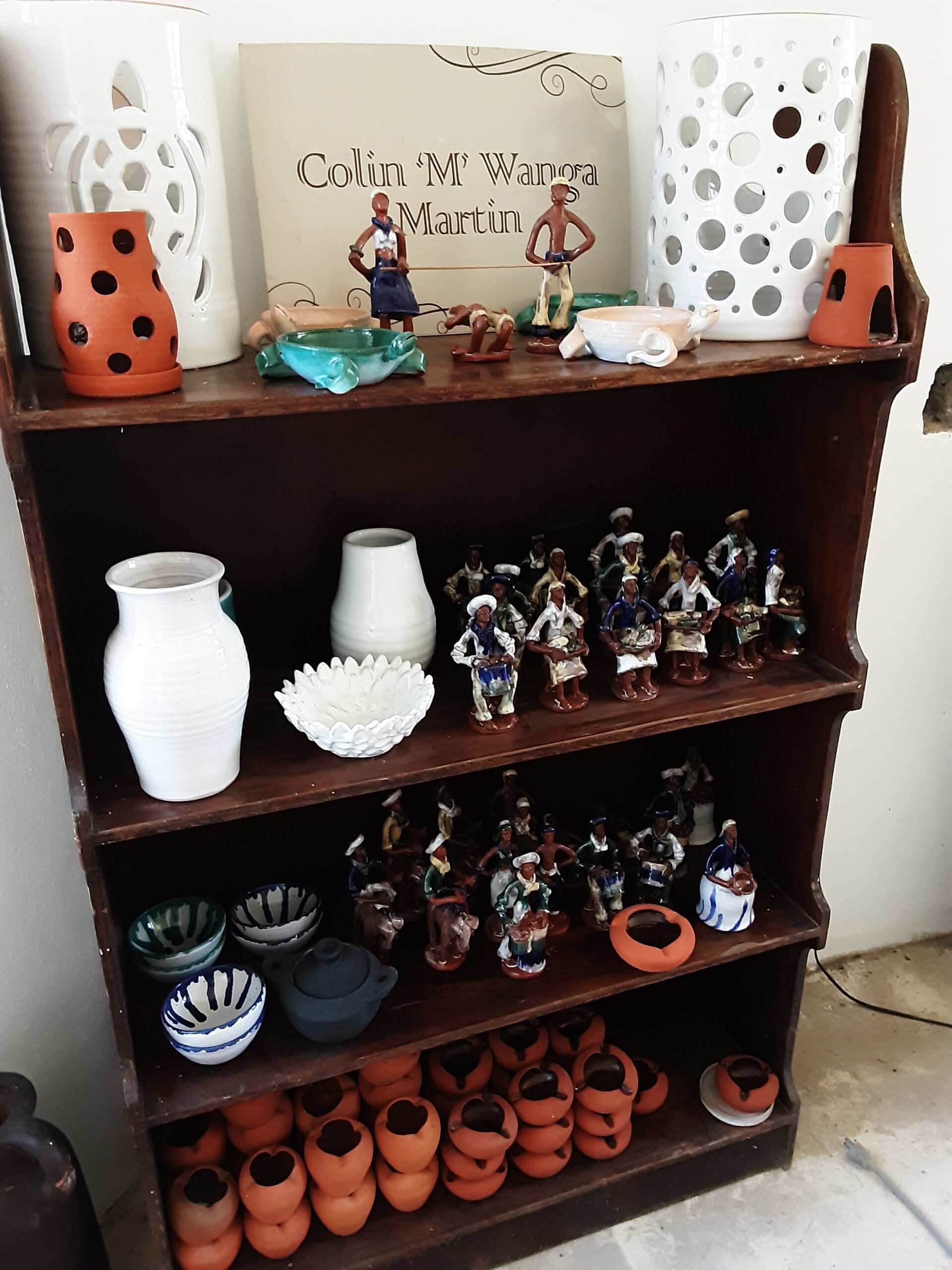 The kaleidoscope of color when you enter the room is enough to grab your attention, not to mention the buzz, and the enthusiasm on the faces of the handful of people who are milling around, using their hands to create beautiful art.

An adult female student is so engrossed in the activity that she tossed her shoes aside, donned her apron, and placed her headphones, which are now almost completely covered in clay, over her head as she gets ready to use the potter’s wheel to begin her day.

This is the usual atmosphere at this ceramics studio on the compound of the Island Academy School that is currently owned by Connie Cole, and operated by former veteran mas’ builder and designer, Colin Wanga Martin.

Martin, one of the founding members of Revelers Mas’ Troupe, is known for his extraordinary talent in costume designing – a talent that played a pivotal role in the band capturing the Band of the Year title 20 times, including fourteen consecutive years.

The former mas’ building is one of a few Antiguans and Barbudans who was involved in wire bending, the traditional way of making mas’ and Carnival costumes of any size. Wire bending involves the use of wire and other raw materials, that are sourced locally, to build a costume from start to finish. The wires usually form the frame of the costume.

After years of creating history in the art form, he has now moved away from using his hands in that arena to his first love – pottery.

He told Observer that while he was always involved in this process as his main income source, he usually paused during the summer period to make room for Carnival. 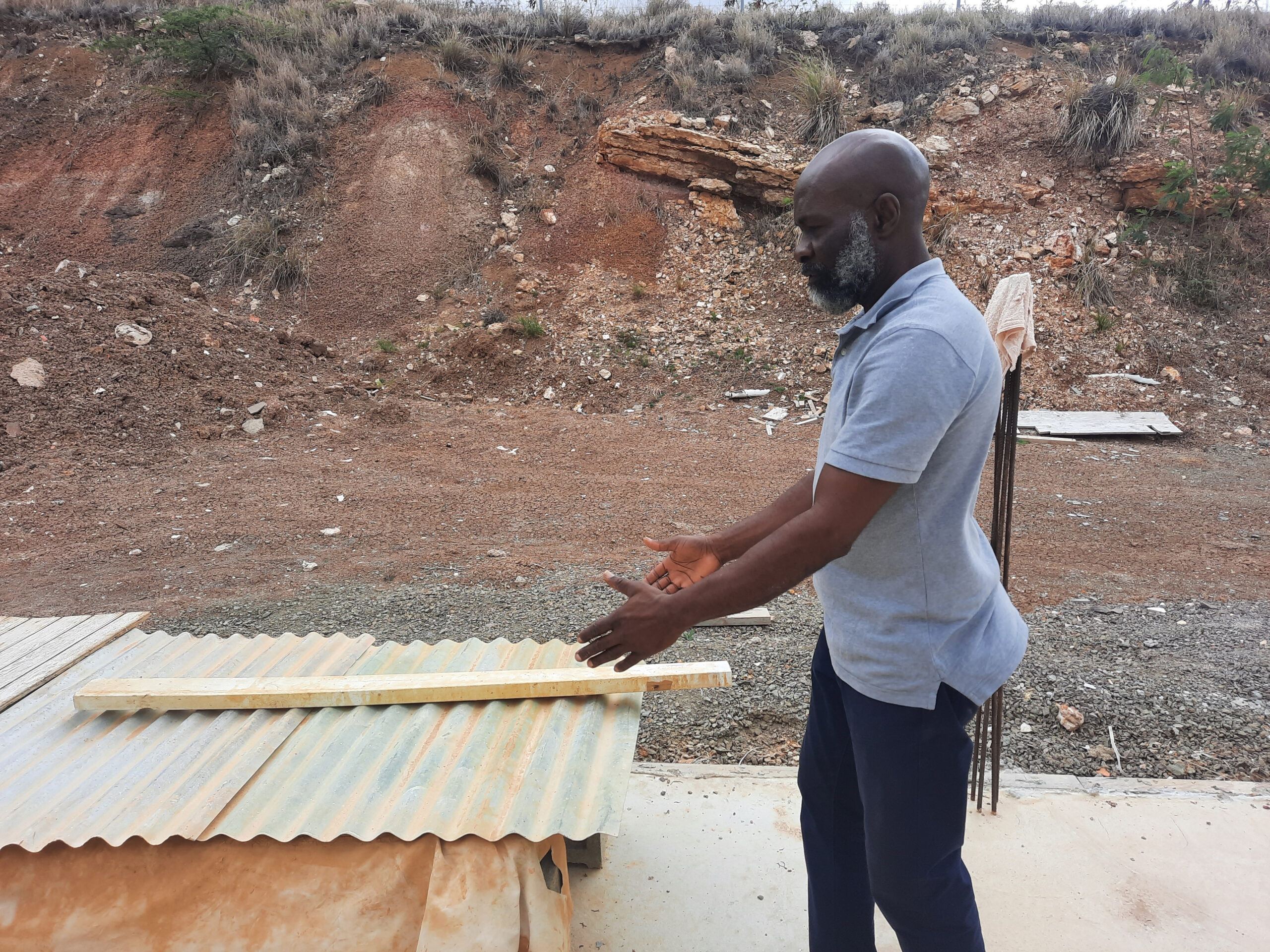 Colin Wanga Martin showcases the process to make the clay.

However, for almost four years now he has hung up his costume building hat to embrace his true love full time.

“To me, Carnival was a very bad investment, but it is was the love for the artform, love of country that made me continue. People forced me to brush it aside by the way they treated me and others.”

“With pottery, I now find peace in myself. When I am on the wheel expressing myself, it is such a good feeling. I just flow, I am under no pressure, I am always at peace, to me it’s just like a calling, it’s just a part of me,” Martin shared. 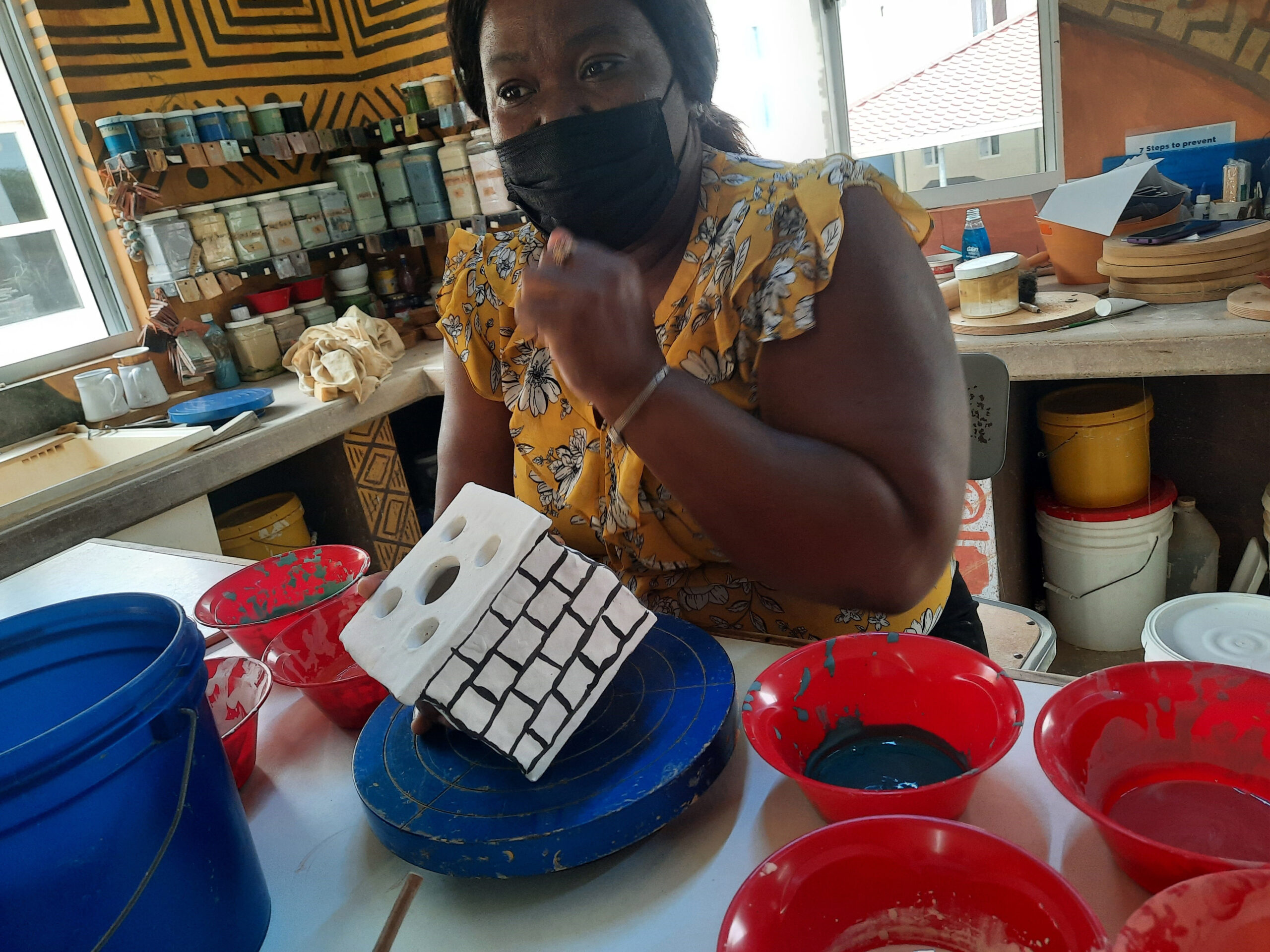 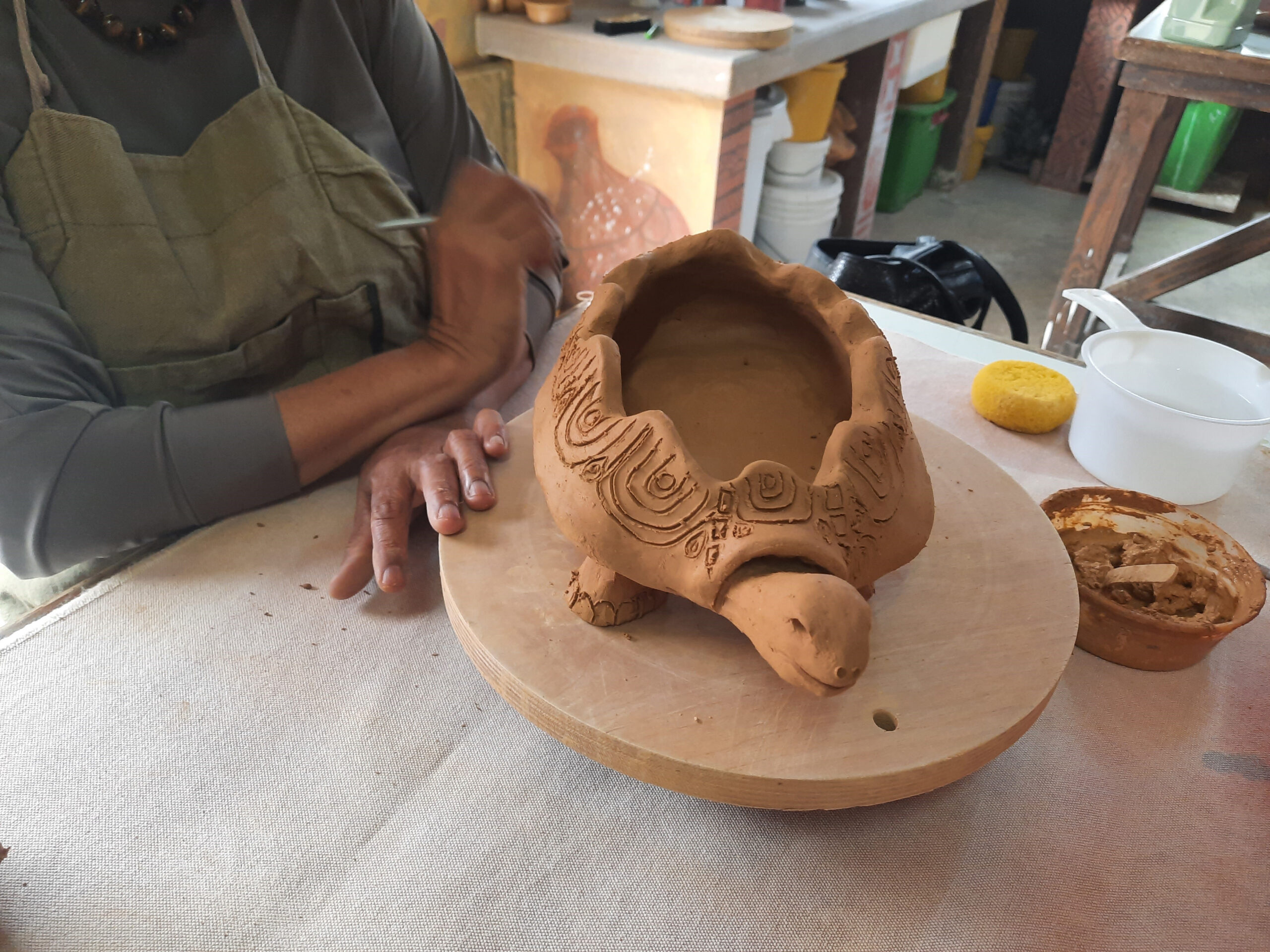 He smiled with glee giving me a tour of the facility from the back of the studio which had bags of clay, white and brown, which were sourced from by the potter himself from various parts of the island. The only material that is sourced overseas is the glaze that is used to decorate the finished product.

Both colors are soaked in water which breaks them down, it is then strained to separate the liquid and other particles.  The clay is then removed from the strainer and placed in a plastic that is covered in cloth to retain the moisture.

The freshly-made clay is then placed in what is called a pugmill, where it will be mixed and further refined before it is ready to be used.

With the finished product, Martin and others under his tutelage are able to create many items – from cups and plates to wall décor, figurines, and other amazing pieces of art. 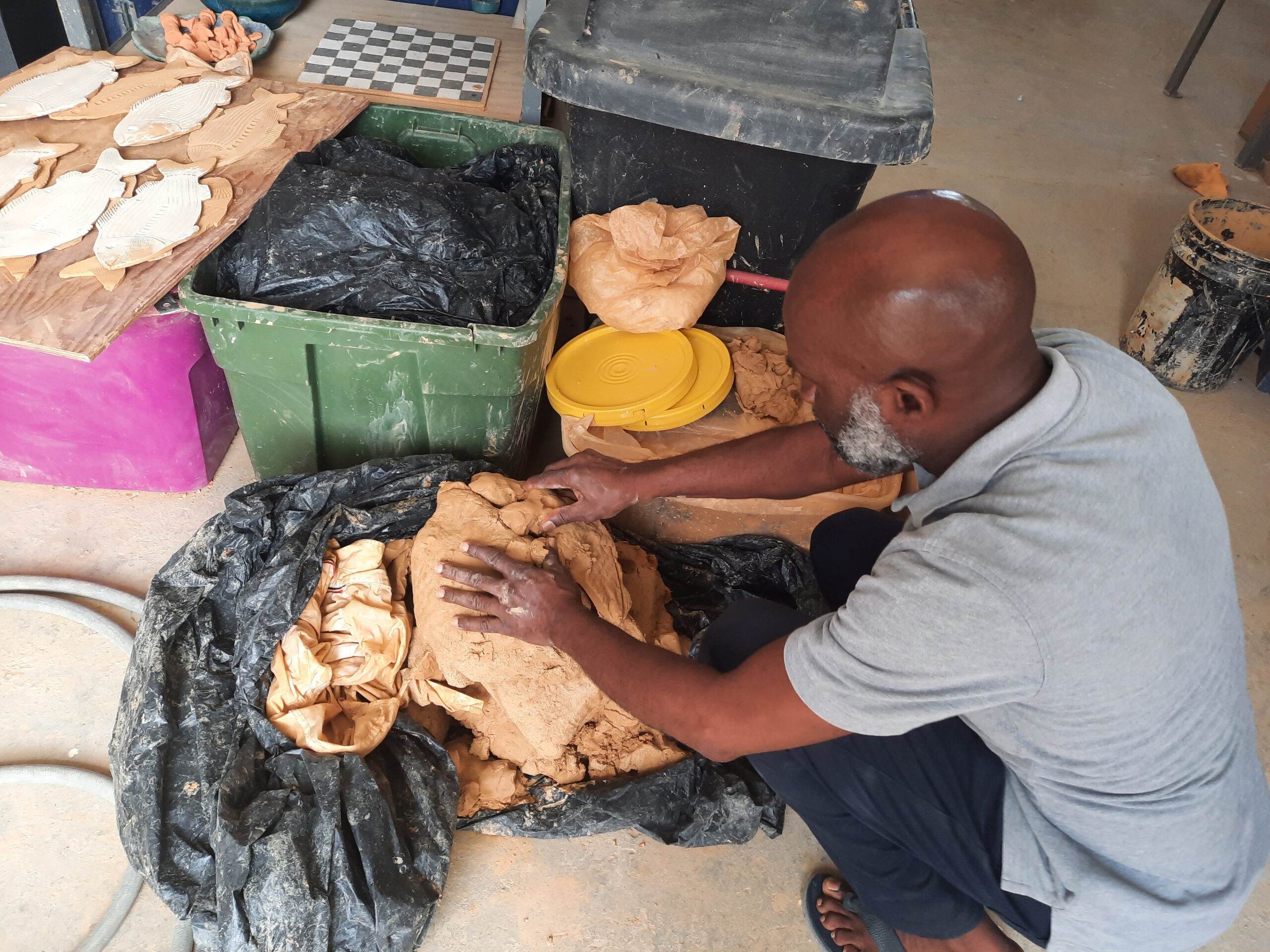 He smiled when he shared,” I make anything, I make likkle man, likkle woman. I do a lot of figurines for gift shops and so. The only thing I cannot do is to put life into them, there is a greater potter, and I have always acknowledged that.”

He also creates custom-made pieces for several hotels and private properties on the island.

An artwork created from clay is left for about two to three weeks so that it can properly dry, and depending on the size of the artwork, it is then placed in a kiln – a thermally insulated chamber, or a type of oven that produces temperatures sufficient to complete the hardening process. 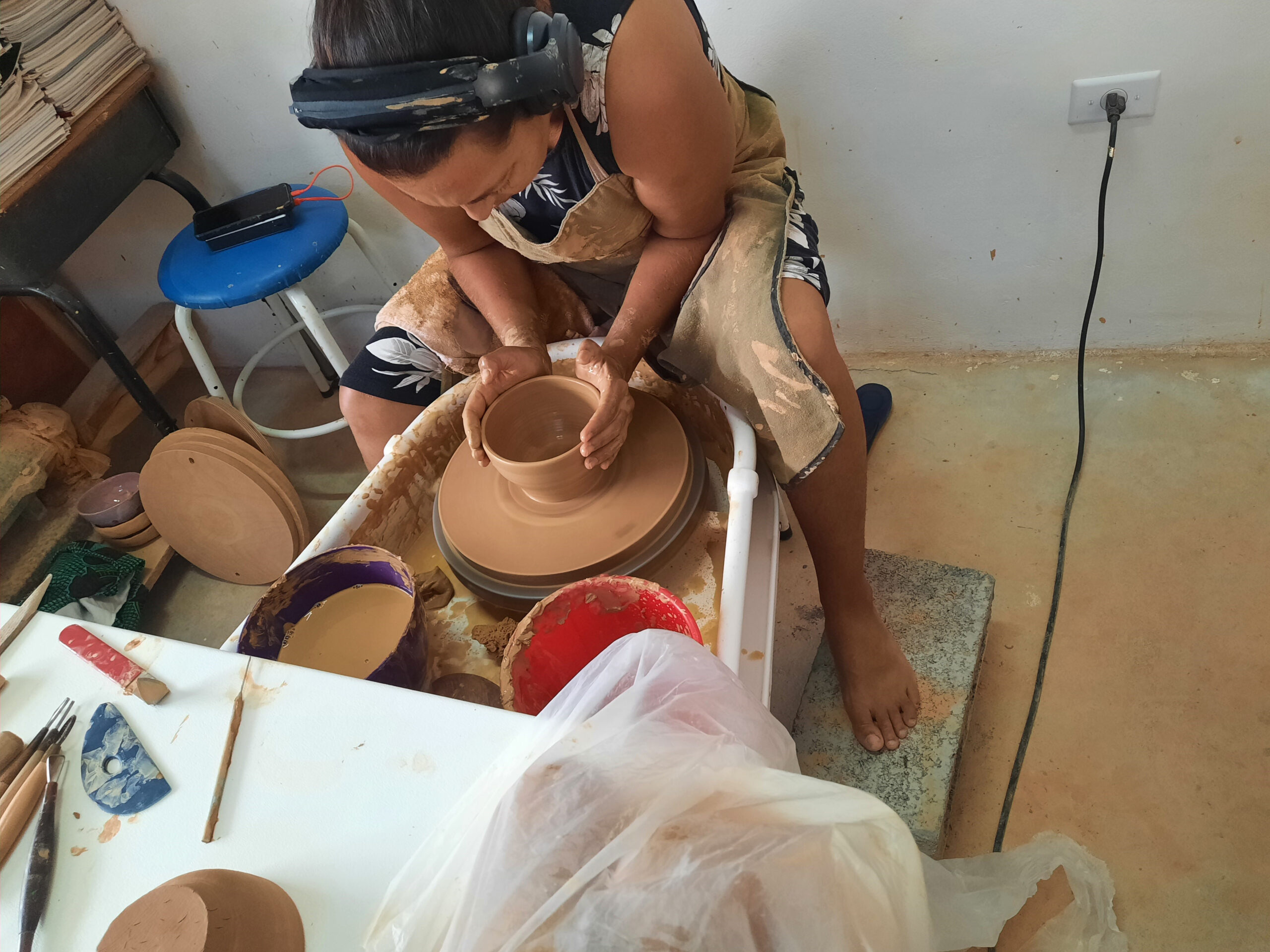 Student Molly at the potter’s wheel (Photos by Theresa Goodwin)

This first firing is called a ‘bisque firing,’ and the piece is then removed from the kiln, glazed or decorated, and then fired for a second time.

The ceramicist is usually in the studio from as early as 7:00 am on any given day. He teaches pottery to students at the Island Academy by day, and to adults and children, including businessmen and women thrice weekly in the evenings.

Martin is of the firm view that pottery is a dying art in Antigua and Barbuda, and by teaching the craft to others, he believes that he could assist in grooming the next generation that will come to appreciate and love the endeavour.

“This is something I was trying to do with the mas’ building, I had a few young people who were interested in the process, but we did not get too far. Here, a lot of people come and go, and most of them are learning really fast, they are able to work with little or no supervision from me,” Martin said.