$10 to save controversial banana statue’s skin? Not a-peeling, says council

A council in Melbourne’s inner north is resisting pressure to sell a controversial sculpture of an anthropomorphic banana after an on-air bid by British-American comedian John Oliver.

The comedian offered to purchase the artwork, titled Fallen Fruit, for $10 and a $10,000 donation to a local food bank during a segment of his HBO show Last Week Tonight which aired overnight. 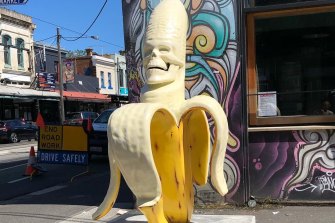 Oliver also offered to make a $5000 donation to Australia Zoo’s John Oliver Koala Chlamydia Ward and send a sculpture of a giant alligator showing his middle finger to replace the banana.

The alligator sculpture was created as a prop for a 2017 segment of the show about replacing Confederate symbols in the United States following white nationalist rallies in Charlottesville.

Fallen Fruit, by Melbourne artist Adam Stone, was purchased by the Yarra City Council for $22,000 as part of a $100,000 grant from the Transport Accident Commission.

The artwork, which features a 1.8-metre peeled banana with a skull face, attracted mixed reviews from the public after it was placed on Rose Street in Fitzroy last November.

The council was forced to remove the statue and put it into storage within weeks of its installation after vandals attempted to decapitate it with a saw.

“Since the citizens of Melbourne seem to think that their money has been wasted, I might have a solution for you because I will gladly take that banana off your hands,” Oliver told viewers.

Offering the alligator as a replacement, Oliver said: “What could be more Australian than a dangerous animal telling anyone who comes near it to go f---k themselves?”

Oliver then gave the council a week to respond.

The offer has divided the internet, with some users calling for the council to accept the bid while others pushed for the statue to remain in Fitzroy for generations to come.

In a statement, Yarra City Council Mayor Sophie Wade said the council was excited to receive Oliver’s offer, but it wasn’t ready to part with the sculpture, which was “recuperating” after the “traumatic” decapitation attempt.

“Yarra is known as the arts and culture capital of Melbourne for good reason,” she said.

“I would like to officially extend an invitation to John Oliver to come Down Under and visit Yarra. I would be happy to take him on a tour of our wonderful city and organise a private viewing of the banana, so they can get acquainted.”

Local food charity Food Bank Victoria also responded to the offer on social media, telling Last Week Tonight it was building “a platform for your bad manners alligator in our food distribution warehouse”.

“$10K is just what we need for our Winter A-peel. (Actually, we might just leave the jokes to you). Let’s do it,” the post read.

Fallen Fruit was part of Stone’s Cane Toad exhibit, which featured several variations of banana sculptures. One of them was a 3D-printed portrait, in banana peel form, of Bill Clinton reclining nude for Monica Lewisnky.

The sculpture was intended to be an “invitation to reflect on our human tendencies towards unsustainable excess, a warning for the future.”