Wall Street closed higher overnight after an up-and-down session as investors anticipate a new stimulus deal being reached but the Australian sharemarket is set to start the day in negative territory, with futures shortly before 7am AEST pointing to a fall of 13 points at the open.

1. All eyes on US fiscal stimulus: US fiscal stimulus, and political gridlock in Washington, remained the markets’ primary concern overnight. As the virus crisis rages on, and the globe’s economic recovery shows signs of stalling, market participants a clinging onto hope that policymakers in the US can nut out a deal, and keep fuel the US economy’s rebound. 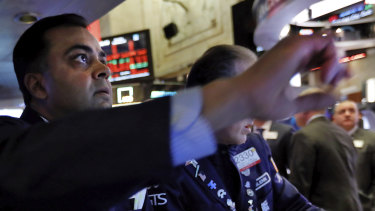 The markets have positioned for the passage of a package. But timing, and the shape of the stimulus itself is key, with uncertainty still raging as to whether Democrats and Republicans can find common ground.

2. US Dollar and US Treasury yields drop: A lack of progress in stimulus talks overnight appeared to weigh on the US Dollar, and sparked another drop in US yields. The Greenback ended its three-day run of gains, falling against almost every G10 currency overnight.

Perhaps more noteworthy, US 10 Year Treasury yields closed at a fresh all-time low of 52 basis points, in what appears an indication of growing concern about US political stability, and the path forward for the world’s nascent economic recovery.

3. Gold rips to hit fresh all-time highs: The drop in the Dollar and yields proved dynamite for gold prices once again. The yellow metal surged 2 per cent in the US session, to trade well above $US2000 per ounce, and record a fresh-all time high.

The strength in gold remains primarily a function of real yields, with the price of the commodity benefiting simultaneously from a marginal pick-up in inflation expectations recently, along with the the belief the US Federal Reserve will allow a slight overshooting of its inflation target in order to hold nominal yields low.

4. US stocks eke out gains, despite policy uncertainty: US equities were able to eke out gains, despite a lack of clarity on fiscal stimulus, and what happened to be a soft lead received from European markets. Market sentiment remains generally positive, with the US VIX holding its multi-month lows around 24, despite calls for a seasonal pick-up in volatility this month.

The S&P500 ended the overnight session up by 0.36 per cent, in a day’s trade that saw the energy, real estate and consumer staples sectors outperform the broader market. The NASDAQ also added to its recent run, to close at a new record high.

5. ASX200 set for a small pull-back at the open: The ASX200 is set for a drop at the open, despite Wall Street’s notionally positive lead. SPI Futures are indicating the index ought to dip a modest 0.2 per cent this morning. The dip comes off the back of what was a very strong day’s trade for local stocks yesterday.

The ASX200 surged 1.88 per cent, in a session that saw market breadth at a solid 88 per cent, as local investors shrugged-off domestic concerns about the pandemic and economic lockdowns, and bought into the enthusiasm that had characterised US and European trade in the night before.

6. RBA sticks to its guns, stays cautiously optimistic: The key risk-event for global markets was the RBA’s meeting, but as expected, the central bank delivered few surprises. It kept its policy settings entirely on hold, flagging only that it would be intervening in bond markets this week in order to reign-back to target the yield on the 3-year government bond.

The RBA also cast a cautiously optimistic tone about the economic outlook, stating the recovery remains ahead of its earlier forecasts, though the central bank acknowledged the immediate risks to the economy from Victoria’s recent lockdowns, an a possible national second-wave of COVID-19 infections.

7. Event risk in the day ahead: Looking ahead to the next 24-hours, and several events loom on the corporate and economic calendar. US earnings season rolls closer to its end, while local investors will keep one eye on the ASX’s upcoming reporting period.

New Zealand will be publishing its employment data this morning, before attention turns tonight to US ISM Non-manufacturing PMI, and the ADP Non-Farm employment update, which prefaces the highly anticipated official Non-Farm Payrolls release of Friday.

This column was produced in commercial partnership between The Sydney Morning Herald, The Age and IG

Information is of a general nature only.

Lionel Messi: I Am responsible for my mistakes. I wanted Barcelona to become stronger
Mourinho went to the dressing room in the 77th minute of the game with Chelsea to bring back Dyer, who was not replaced
Manchester City have announced the transfer of Ruben Dias from Benfica. Defender signed a 6-year contract
Zidane on Vinicius and Rodrigo's playing time: They're still boys. This is Real Madrid, these are the realities of football
Braithwaite specifically stopped the car to take a photo with a fan in a wheelchair
Mourinho and Lampard had a fight in the Tottenham - Chelsea match: When you lose 0-3, Frank, you don't stand on the sidelines
Valencia want to rent Rugani from Juventus
Source https://www.theage.com.au/business/markets/8-eight-asx-set-to-dip-at-open-despite-wall-street-gains-20200805-p55im2.html?ref=rss&utm_medium=rss&utm_source=rss_feed

Health Department under scrutiny over legality of hotel detention