Nino Napoli rorted Victoria's Education Department while there was an "air of invincibility" among those at the top of the organisation, a court has heard, but his lawyer has called for the former bigwig to avoid jail.

Napoli was general manager of the department's finance unit and responsible for a $5 billion budget when he had an involvement in dozens of suspicious contracts that paid out $500,000 to companies run by his relatives between 2007 and 2014. 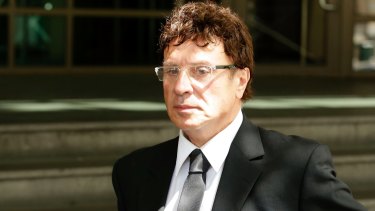 Nino Napoli outside the Melbourne Magistrates Court in 2017.Credit:Darrian Traynor

Some of the contracted printing work was done but the money Napoli and his relatives misappropriated was designated for schools. Napoli personally benefited by $95,000, the County Court has heard, part of which he spent on wine, a television, an iPad and his signature toupee.

The 64-year-old's plea hearing continued on Friday, when defence counsel Jim Shaw pointed to a "culture" that existed among the department's top echelon at the time, which included falsifying invoices and approving suspicious contracts.

Mr Shaw cited as other examples former deputy secretary Darrell Fraser, who was convicted - but spared jail - for steering almost $1 million of department money to an IT company he was connected to; and former acting secretary Jeffrey Rosewarne, who was found by Victoria's anti-corruption investigators to have spent thousands of dollars of school funds on travel expenses, wine, furniture and his 50th birthday party. Mr Rosewarne was not charged.

"There was an air of invincibility amongst the top people in the department," Mr Shaw said. 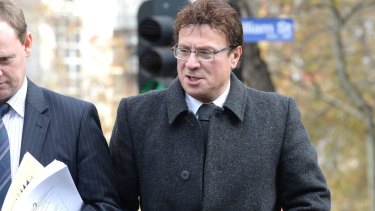 Asked by judge George Georgiou if the group thought it acceptable to "rip off" their employer, Mr Shaw said: "Well, that's how it ended up manifesting itself".

He said Napoli "loved" the department for the 40 years he worked there and gradually formed the attitude he held at the end.

"He makes no excuse for his behaviour, it's just an explanation," he said.

Mr Shaw rejected the judge's suggestion greed motivated the offending, as Napoli took the view "the department was getting value for money" from the contracts he approved. Had greed been the motivation, he said, the amount of money swindled would have been higher.

Prosecutors say Napoli abused his knowledge of the department's "banker school" scheme – where a designated school received large amounts of funds to share with nearby schools – by using department money to pay invoices or directing banker schools to pay.

Napoli and cousin Carlo Squillacioti have each pleaded guilty to conspiracy to defraud and attempting to pervert the course of justice.

Squillacioti, 62, was the director of companies illegally paid during the rort. Two of his companies were awarded contracts for printing work even though they did not have any equipment. He personally benefited by $58,000.

Both men also instructed family members and associates to mislead investigators and destroy incriminating documents when they became aware of the Independent Broad-based Anti-corruption Commission probe.

Mr Shaw called on Judge Georgiou to impose a community correction order on Napoli and for him to be spared jail, partly because he was the primary carer for his 93-year-old mother, who is nearly blind.

Napoli took his mother out of an aged care centre a fortnight ago after several residents tested positive to coronavirus, his lawyer said, and now spent every night at his mother's home. Napoli's wife was the primary carer for her elderly father.

Judge Georgiou questioned why Napoli's brothers couldn't help care for their mother. He told Mr Shaw he would need to call witnesses if the lawyer was to argue that Napoli's family would suffer hardship if he was jailed.

Mr Shaw said Napoli suffered a "spectacular fall from grace" from 2015, when the media reported on IBAC public hearings, and that his reputation was "in tatters".

The lawyer conceded his client brought the shame upon himself, although he noted prosecutors had significantly changed their case - by reducing the amount of money misappropriated - since Napoli was first charged.

Napoli and Squillacioti were remorseful, ashamed and embarrassed by their crimes, their lawyer said.

The men, who have both paid back the money they misappropriated, remain on bail for when the plea hearing returns on Wednesday.

Adam Cooper joined The Age in 2011 after a decade with AAP. Email or tweet Adam with your news tips.

The Agent Of Gareth Bale: In real Life, Gareth was treated differently. I hope there will be no question of a return
Micah Richards: People write: Richards only works live because of BLM. I achieved this through hard work
The former Director of Barca: Martino said Messi: I know that if you call the President, he will throw me out
Liverpool are in contact with Mbappe's entourage and will compete for him with Real Madrid next summer
Carragher on de Bruyne: Next after Messi and Ronaldo. This is the best player in the Premier League
Morata arrived in Turin. He goes to Juve on loan
Barcelona wanted to buy Tiago before he moved to Liverpool. Catalans were ready to pay 10 million euros
Source https://www.theage.com.au/national/victoria/air-of-invincibility-inside-education-department-during-bigwig-s-rorting-court-told-20200814-p55lw7.html?ref=rss&utm_medium=rss&utm_source=rss_national

From the Archives, 1981: Gang holds Cup man's family at gunpoint

Where prices really do double in 10 years