It's too easy to miss brilliant streaming shows, movies and documentaries. Here are the ones to hit play on or skip.

First things first. Martha Coolidge's 1983 Valley Girl (which is also on Stan) was a terrific movie that deserves to be mentioned in the same breath as all the John Hughes teen classics that followed it. 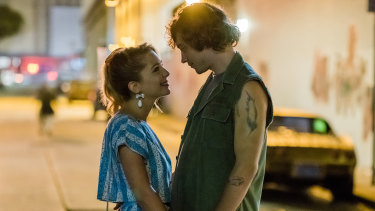 The fluoro-coloured Valley Girl reboot has little of the appeal of the gutsy 1983 Martha Coolidge classic.Credit:Stan

It had agreeable amounts of grit and female agency, and some thoughtful and even helpful reflections on the choices that teenage girls have to make. And, alongside Deborah Foreman in the role of San Fernando Valley girl Julie Richman, there was the captivating young Nicolas Cage, whose stiff-necked vulnerability added an unexpectedly poignant layer to the character of teenage LA punk Randy. It also ensured that anyone who played Randy in a remake would be on an absolute hiding to nothing.

The new Valley Girl is an unrecognisable beast – a fluoro-coloured jukebox musical that seems unlikely to appeal much either to those who grew up in the '80s, or to modern teenagers who have no connection to the music.

Writer Amy Talkington and director Rachel Lee Goldenberg seem intent on making a cartoon caricature of the '80s, every scene crammed with garish colours and things like Sony Walkmans, Ronald Reagan masks, aerobics workout gear, E.T. dolls and MTV logos. This time around, Julie is played by Jessica Rothe (La La Land), who was about 30 at the time of filming and so isn't the most teenage-looking schoolgirl ever to hit the screen. That said, Olivia Newton-John was around 30 in Grease – and Stockard Channing some years older – and nobody would change that.

Once again Julie is living a comfortable if stultifying life in the valley, with more set to come when she finishes high school. Enter once more Randy, this time played by English actor Josh Whitehouse (Poldark), who can play guitar but who otherwise resembles a rag doll more than an '80s punk rocker. Will they get together in the end? Place your bets now.

Fans of '80s music won't enjoy their cherished tunes being churned into pap by the cast recordings, and fans of the original movie won't enjoy the counterproductive changes to the story.

In the original, for instance, Julie's parents were old hippies who encouraged her to think for herself and dare to defy the expectations of her peer group. Here, Julie's parents (Judy Greer and Rob Huebel) want to railroad her into conformity and an unhealthy relationship with her cartoonishly fratty boyfriend (Logan Paul). Oh well.

Believe the hype. Lin-Manuel Miranda's hip-hop musical about the life of American founding father Alexander Hamilton is a huge achievement, and a hugely entertaining piece of work. Performed entirely in brilliant verse, it delivers a serious history lesson but puts equal weight on the drama, and is equally illuminating when it comes to the personalities, motivations and emotions of those involved.

Viewers with a low tolerance for hip-hop will be heartened to learn that this original Broadway performance provides respite with more traditional show tunes as well.

South African-New Zealand comedian Urzila Carlson has a friendly, unpretentious energy – and plenty of it. That and her evident lack of filter make this stand-up special filmed at Melbourne's Athenaeum Theatre a whole lot of fun. Carlson has some interesting reflections on the constant judgments endured by those of us who are overweight, and also succeeds in provoking unexpected laughs from such well-trodden territory as cask wine and Bunnings sausages.

A Buffy the Vampire Slayer knock-off in Catholic drag with a sense-of-humour bypass? Nobody was clamouring for that, but Warrior Nun, based on an American comic book series, has become quite a cult hit on Netflix. The battle between good and evil begins in Spain, where murderous demons stalk the shadows, and where quadriplegic orphan Ava (Alba Baptista) is about to get the power to fight them alongside deadly Vatican special forces. Baptista makes a charming naif, but Ava's teen-diary narration grates.

Peter Cattaneo, director of The Full Monty, really knows how to tinkle the emotional ivories.
He plonks himself down at the metaphorical piano once more in this new movie, which is every bit as uplifting as it is utterly unsurprising. 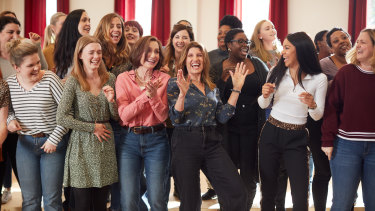 It's based on the true story of Britain's first military wives' choir, and it benefits hugely from the casting of the ever-delightful Kristin Scott Thomas and Sharon Horgan – their chalk and cheese is a perfect combination that holds interest in material that might have got a bit humdrum and schmalzy.

When a British army unit is deployed to the deadly war in Afghanistan, the wives left behind on the base are understandably anxious. Prim, bossy officer's wife Kate (Scott Thomas) prevails upon the much earthier Lisa (Sharon Horgan) to form a choir to keep the women's spirits up.

It's laughter, tears and triumph all round as the women reveal unsuspected talents, deal with grief both new and pent-up, and succeed in starting something wonderful – as the end credits show, there are now some 75 British Military Wives Choirs.

The chill of mortality blows through this dark comedy series like a winter wind through a Toronto train station. And dissatisfied fiftysomething Davina Jackson (Kim Cattrall) will need more than HRT patches to keep her warm. 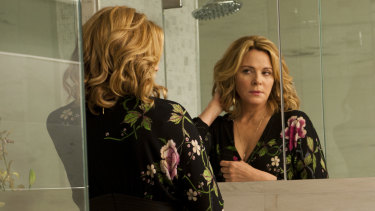 Kim Cattrall plays Davina Jackson, a woman in her 50s dealing with the ageing process, in Sensitive Skin. Credit:Acorn TV

This remake of the much-loved British series is a melancholy delight as art-loving middle-class Davina and her hypochondriac humorist husband of 30 years (Don McKellar) embark on their third act encumbered by fears and temptations, not to mention friends and family who make them feel bad about themselves.

*Stan is owned by Nine, the owner of this masthead.

Lopetegi about éver Banega: When he plays well, the whole of Seville plays well
Sanchez received 7.5 million pounds from Manchester United for terminating his contract
Javi Martinez is Interesting to Renn. The club will play in the Champions League
Fonseca Pro 0:2 with Sevilla: Roma deserved to lose
Manchester United are ready to sell Lingard. He has scored in the last two matches
Dzeko Pro 0:2 with Sevilla: Roma never got into the game
Sergio Region: Sevilla are determined to win the Europa League. We want to win everything we can
Source https://www.theage.com.au/culture/tv-and-radio/an-unrecognisable-beast-1980s-classic-valley-girl-gets-a-reboot-20200716-p55cqj.html?ref=rss&utm_medium=rss&utm_source=rss_culture