Premier Daniel Andrews and federal Labor leader Anthony Albanese are facing a backlash from powerful Victorian trade unions over plans to reform the party after revelations of branch stacking.

The resistance emerged on Thursday, as Mr Andrews chose three new ministers to replace Adem Somyurek, Robin Scott and Marlene Kairouz, who were sacked or resigned in the wake of an investigation by The Age and 60 Minutes, and as the feud between Mr Somyurek and his former mentor Anthony Byrne escalated. 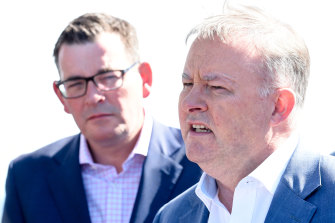 A bloc of unions, including the powerful building union the CFMMEU and the plumbers' union, will not accept the plan to have Victorian candidates for parliamentary seats chosen by the party's national executive committee and they have not ruled out taking the party to court if a negotiated settlement cannot be reached.

The national executive's takeover of the branch and the appointment of two administrators was invited by the Premier on Monday in the immediate aftermath of the explosive revelations of widespread branch stacking.

But the CFMMEU, which unsuccesfully took on the party’s national leadership in court last year after it moved to expel the union's controversial Victorian boss John Setka, confirmed on Thursday that it was seeking legal advice on the takeover, with other unions also canvassing their legal options.

The Premier has made it clear that unions, who pay Victorian Labor hundreds of thousands of dollars each year in affiliation fees, had no place in the immediate plans to clean up the party that include a three-year freeze voting rights, an audit of memberships and federal control of preselections.

But plumbers' union state secretary Earl Setches told The Age on Thursday that he and his colleagues, while wholly supportive of clean-up of Victorian Labor, would not accept party figures from NSW and other states choosing the candidates to contest elections for the Victorian ALP.

Mr Setches said he had the backing of other unions in his position that the labour movement was not implicated in the branch-stacking scandal and that unions did not deserve to have their voting rights suspended.

“But Daniel Andrews should control what happens.

“The national executive are not going to be telling Victorians who to preselect.”

The CFMMEU said it had made no decisions on how it would react to the move by the national executive but it was looking at its legal options.

“The union is seeking legal advice before making any decision,” a spokesman said on Thursday.

Mr Andrews said he wanted the administrators appointed by the party, former Victorian premier Steve Bracks and former federal minister Jenny Macklin, to begin their work before he began speculating on when the party’s democratic processes might be restored.

“I have a number of requirements ... particularly in relation to genuine members who are consenting and are self-funded, that’s not my priority at the moment,” the Premier said.

“Let’s get ourselves into a position where we can be confident in the integrity of those processes before we start speculating on when votes might start happening again.”

As the fallout from the scandal continued to unfold on Thursday, Mr Somyurek continued his attack on federal Labor MP Anthony Byrne, with the fallen powerbroker saying he was "really worried about the mental health" of Mr Byrne, his former mentor.

Mr Somyurek was caught on covert video surveillance, captured in the electorate office of Mr Byrne, describing his industrial-scale branch stacking operation and encouraging a businessman to forge signatures on party membership forms.

Politically damaging text messages between the two men were leaked on Wednesday night, hours after Mr Byrne pledged to co-operate with anti-corruption investigators probing the scandal.

“Anthony Byrne is a long and dear friend of mine, I’m not sure what went wrong,” Mr Somyurek told Nine News on Thursday afternoon.

“I’m really worried about his mental health. Anthony Byrne is someone I really respect. Everything about branch work I know is everything Anthony Byrne taught me.

“I have a lot of respect for the man but I do think something is seriously wrong.”

In a statement on Wednesday night about the release of the text messages, Mr Byrne said Mr Somyurek had selectively released a handpicked selection of text messages to him sent over two years. "That speaks for itself," the federal MP said.

Baros will end his career at the end of the season
Pogba and Brunu were injured when they collided in training. The Bournemouth game is in question (Daily Mail)
Ex-President of Barca Gaspar: Messi has a few more years to be the best player in the world
Morata scored a double for Atletico for the first time since March last year
Rummenigge on Tiago: there have been no Contacts with Liverpool, but he wants something new
Rivaldo on Messi in Juve: The world will boom. The Duo of Lionel and Ronaldo will go down in history
Atletico Interrupts the penalty for the second match in a row. Morata converted an 11-yard shot from the 2nd attempt
Source https://www.smh.com.au/national/victoria/andrews-albanese-face-union-backlash-over-labor-takeover-20200618-p5540w.html?ref=rss&utm_medium=rss&utm_source=rss_national

Householders craving more space in the wake of COVID-19

The secret hidden beneath this VW SUV

People Gather at Brooklyn’s Brighton Beach Ahead of Holiday Weekend

After months in lockdown, have we forgotten how to party?

The power of one: Putin settles in for an extended stay

American Flag Unfurled From Gatlinburg SkyBridge Ahead of Independence Day

Disappearance of Juanita Nielsen remains a mystery, 45 years on

'Until the number 10 excited!': Tiny dancers prepare for ballet return

'Dealing with the weirdness': Telstra braces for the new normal

Where the bloody hell now? $60b tourism sector fights for survival

Preserved flowers are back. You can thank the pandemic

Redfern transition to tech and student hub is a step closer

We must take an 'all of us' approach to coronavirus fight

Your Daily Horoscope for Saturday, July 4

No longer business as usual

'They can never take away our beliefs': Beijing's endgame to quash HK dissent

We just want an apology and some understanding

The lifestyle choice losing appeal due to pandemic

59 things you get wrong about Australia

Inside lavish hide-out of Epstein’s madam

Want to own your very own Block?

The stimulus package that could boost Coast jobs

'You hear screaming at night': Plea to find homes for hotel homeless

Carl Reiner was the perfect representation of the Jewish storyteller

Prince Andrew could be ‘covert target’

New Australian Made logo a ‘leftover of Malcolm Turnbullism’