Andy Murray: 'Tennis is hard, but home life with the kids? That's pressure'

For better or worse, we have all learnt a little more about ourselves in 2020. Andy Murray, who has had as much spare time as the rest of us, was no different.

"I learnt to be very patient," the famously impatient Scot says, "which was a good thing with my kids. But I also learned a lot about things I couldn't do." 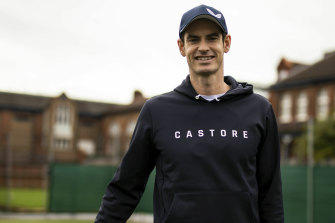 "I learnt to be very patient, which was a good thing with my kids. But I also learned a lot about things I couldn't do." Credit:PA

Like what? "Well, they're always asking for stuff during the day - painting and drawing stuff for them to colour in. I'm dreadful at things like that. Cooking's another one. I try to follow recipes, but I have to follow them to a T. If things start going wrong, I have no idea how to fix them..."

Yes, 2020 was the year Britain's greatest tennis player went domestic. With many of the major tournaments cancelled, the 33-year-old spent "by far" the most time he's ever had with his three children, Sophia, 4, Edie, 3, and one-year-old Teddy - plus his wife of five years, Kim (a part-time artist, which makes up for Murray's lack of craftiness), at their home in Surrey, UK.

After more than 15 years as a full-time professional sportsman, changing rackets every few hours, throwing his toys out of the pram, living and breathing balls and nets and puréed energy snacks, in March he became a full-time unpaid parent, changing nappies every few hours, picking up toys thrown out of a pram, living and breathing balls and crayons and puréed everything.

"It's very, very hard. When I come back from a day's training I go: 'Ugh, God, I'm tired today', [but] it's a different sort of fatigue with the kids. Training's more for myself, with downtime for lunch and time to myself. When you've got three children, it's just constant - it's a lot of pressure," he says.

Home schooling was the worst. "Sophia is better now, but six months ago she just didn't want to listen. Teachers are exceptional at what they do. I'm so glad they're back at school."

Looming over the camera on Zoom, Murray - as relaxed and genial as I've ever seen him - looks slightly knackered. It's his mother's fault. Judy has a new TV show, Driving Force, in which she looks at the careers of top sportswomen and considers, yes, the driving force behind them.

"It's quite funny," Murray says, "she's sort of always been portrayed as being a 'pushy mum' in the media, and she actually was being a bit pushy last night trying to get me up early to do interviews... But I couldn't say no."

One of the issues discussed was the BBC's Sports Personality of the Year, specifically Judy's call for it to be split into men's and women's categories. In the award's 65-year history, the winner has been female just 13 times. Murray alone has won more times (four) in the past 20 years than women have, altogether.

"We've had so many great female athletes that just haven't had the recognition they deserve. If you had two categories, it would give more visibility to the top female athletes and celebrate them more than we currently do," Murray says, citing Jessica Ennis-Hill, runner-up to Bradley Wiggins in 2012, as one who was unfairly overlooked. "It just makes sense. Try it, see if it helps, and if it doesn't you can always change back."

There is harmony in the Murray clan, then, who may or may not spend Christmas together this year. We speak before the UK's "three bubble" Christmas rule is announced, but Murray will either be at the Australian Open or in Surrey.

"I wasn't planning on being home, but now I might be. I guess I'm lucky that my brother and mum are involved in tennis, so I've seen them a couple of times this year. It's tougher with my grandparents [who are all based in Scotland]. They're older, so I want to see them as much as I can."

Like all tennis clubs, the National Tennis Centre in Roehampton, where both the Murrays train, was closed for much of the first lockdown.

"I actually found the first few weeks of that OK, there was a novelty to seeing the kids, but about four weeks in, when I wasn't able to get out and play tennis, I started to find it a bit tough," he says, quickly adding that he is "in a way more fortunate position than most people, so I don't want to be complaining too much about that".

He feels just as lucky that all this happened now, in what we can safely call the twilight of his career, when he's already won just about everything, including two Wimbledon singles titles and two Olympic gold medals.

Had a pandemic - with its attendant cancellations, facilities closures and schools disruption - hit when he was a child, trading rallies with Jamie on the local courts in Dunblane under Judy's watchful eye, he might not have won any of that. COVID might force us to wait even longer for his heir, too.

"Yeah, I guess [it could have been catastrophic], depending on what age we were at. At four or five, you can do things around the house, [but] for a lot of the junior players now, they can't play, there's been no competitions on, and that's been the case for most of the year. That definitely would have had an impact on a lot of young athletes and their development."

Even a decade ago, when Murray was frustratingly close to the success he was so clearly capable of, and wrongly characterised as a mardy, dour figure, it would have hit harder.

"Tennis was basically everything to me. I would have certainly been more selfish around that time. Recently, with injuries, I've become used to life without that, and the children are a distraction. I had something more important in my life than tennis, which helped. In my early 20s and teenage years, I had one direction, one vision - so if that had been taken away from me I would have struggled."

One coping mechanism is that he just doesn't watch much tennis any more, and instead spends any forced time off doing something - anything - else. He has his family, but also a clothing collaboration with Castore, a management company and media work.

"I'd encourage any younger player to find other things outside of tennis. Sport in general doesn't do the best job at preparing athletes for being injured for big chunks, or the end of their career. It's just not something that's discussed enough, and athletes aren't helped to find other hobbies to do after their career."

Murray's future, it seems, lies in coaching, either overseas players or "British players with an attitude I liked". Would he have liked a young Andy Murray? He laughs.

"Well, there's certainly lots of things that are challenging when you're coaching me, because I can be a pain in the a---. But I also work hard and feel I'm very dedicated, so maybe that offsets some of the difficulties. My coaches might say otherwise."

Maybe he could follow in his mum's footsteps and coach one of the kids to grand slam glory? Teddy, a bundle of energy, is especially interested in "picking up a tennis racket and knocking stuff over" - which sounds like he's a chip off the old block.

"I've tried," Murray says, dolefully, "they've got no interest in what I've got to say to them. If they want to try and play tennis, I'd love to help. I can't see it happening, though."

Get a little more outta life

Start your week with practical tips and expert advice to help you make the most of your personal health, relationships, fitness and nutrition. Sign up to our Live Well newsletter sent every Monday.

Until recently, Leo posed with Bartomeu and accepted millions, but then Barcelona broke down. Why?
West Ham have offered 33 million euros for En-Nasiriyah. Sevilla refused
Gattuso on 1:3 with Verona: You can't play like this if Napoli want to return to the Champions League
Sobolev on Tedesco in Spartak: Perhaps we will finish the season well, and he will want to stay
Liverpool are close to the transfer of England U16 striker Gordon for 1+ million pounds
Simeone on the leadership of Atletico in La Liga: We only think about the next opponent
The former defender of Inter, Schelotto has moved to Argentinian racing
Source https://www.smh.com.au/lifestyle/life-and-relationships/andy-murray-tennis-is-hard-but-home-life-with-the-kids-that-s-pressure-20201203-p56k4m.html?ref=rss&utm_medium=rss&utm_source=rss_lifestyle