Pat Cummins could be one step closer to the Australian captaincy after being named as Aaron Finch's sole deputy for next month's tour of England, as selectors picked three bolters in an extended squad.

Uncapped trio Riley Meredith, Josh Philippe and Daniel Sams are all in line to make their international debuts next month after being named in a 21-man touring party. 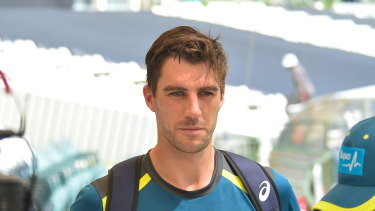 Pat Cummins has been named sole vice-captain for Australia's tour of England.Credit:Getty Images

Official confirmation of the tour came on Friday afternoon after months of around-the-clock planning by Cricket Australia with state and federal governments, agencies and the England board.

The two sides will play three one-day internationals and three Twenty20s in Australia's first international assignment since the series against New Zealand was called off in March due to the COVID-19 pandemic. It is also the first tour by an international Australian team since the global health crisis began.

Cummins had been sharing the vice-captaincy with Alex Carey but selectors have opted to return to the traditional leadership structure.

Selectors said it was not an indication Cummins is being groomed to take over the captaincy.

“After taking advice and reviewing the leadership of the squad, we have decided to revert back to the traditional captain and one vice-captain set-up,” selector Trevor Hohns said.

“Alex remains a genuine leader within the squad and will continue to provide valuable support to Aaron as skipper.

"Pat is very much in the same category and someone the entire squad has immense respect for as a person and a player. This is not a reflection of succession planning, but rather a decision to return to the traditional leadership set-up that has served Australian cricket so well for generations.

“We now have quite an established and experienced senior playing group who all play an important role in the leadership of the team on and off the field. As has always been the case, all senior players have a strong voice in all aspects of planning, preparation and playing.”

Australia have named a larger-than-usual squad for the tour, knowing they will not be able to fly in replacements at short notice due to the strict biosecurity measures.

'We are very excited by these young players who we believe are all capable of playing a role in the Australian set-up in coming years.'

Philippe has been picked on the back of explosive performances for the Sydney Sixers in the Big Bash League.

Tasmanian speedster Meredith gets his chance having long been on the radar of selectors, while Sams has been rewarded for his excellent campaign last summer for Sydney Thunder.

“We are very excited by these young players who we believe are all capable of playing a role in the Australian set-up in coming years,” Hohns said.

All-rounder Marcus Stoinis has been welcomed back into the fold after being dumped following last year's World Cup. Limited-overs specialist Andrew Tye is also back after missing last summer due to injury.

“It’s a squad with great depth and a sprinkle of some exceptional young players,” Hohns said.

“We are very pleased with the final group which was chosen with a view to continuing our recent form in T20 cricket and the longer-term goal of returning to the top in the 50-over game.

“The top and middle order is extremely strong, there’s plenty of accomplished all-rounders, fantastic fast-bowling depth and spin options. The squad also has the cover required to meet all contingencies given replacements are not available for this tour if injury or illness were to occur.

“The NSP believes this squad, along with those who missed out and others who perform well in domestic cricket, offers a solid platform for success in the white-ball game going forward.” 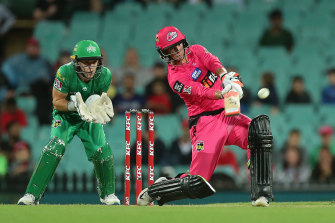 The CA board signed off on the tour last week but it was not until Wednesday that the Australian government granted exemptions for outbound travel for the side.

“We are very excited to be heading to England and to get back into the international fray. We congratulate the ECB on leading the resumption of the game in a way that places the health and safety of players and staff at its core," CA's interim chief Nick Hockley said.

The series was initially slated for June but was pushed back due to the coronavirus crisis.

England were able to save their international season by arranging matches in biosecure bubbles at Southampton's Rose Bowl and Manchester's Old Trafford, both of which have hotels.

Australia's squad will take a chartered flight from Perth to London on August 23 before heading to Derby, where they will stay and train in a biosecure hub.

Australia will share a flight with England's players on the way home to Perth on September 17, stopping over in Dubai to drop off the two nations' IPL stars.

Australia's players will enter a training quarantine hub in Perth but details are yet to be finalised with the WA government.

Palace, Brighton and Sheffield want to buy Brewster. Liverpool ask for 25 million pounds
Milan have offered 4 million euros for the striker Bodo-Glimt Gauge. He scored them in the Europa League
Atletico showed a photo of Suarez in three sets of uniforms
Lemar is Interesting to Leipzig
Chelsea midfielder Loftus-cheek is wanted by West ham, Southampton and Aston Villa
Khimki want to sign Mirzov, Djordjevic and Grigalava (RB-Sport)
Barcelona will issue a transfer for desta for 20+5 million euros at the beginning of next week
Source https://www.theage.com.au/sport/cricket/another-nod-for-cummins-three-bolters-named-for-england-tour-20200814-p55lv2.html?ref=rss&utm_medium=rss&utm_source=rss_feed