By Daisuke Wakabayashi and Jack Nicas

When Tim Cook and Sundar Pichai, the chief executives of Apple and Google, were photographed eating dinner together in 2017 at an upscale Vietnamese restaurant called Tamarine, the picture set off a tabloid-worthy frenzy about the relationship between the two most powerful companies in Silicon Valley.

As the two men sipped red wine at a window table inside the restaurant in Palo Alto, their companies were in tense negotiations to renew one of the most lucrative business deals in history: an agreement to feature Google's search engine as the preselected choice on Apple's iPhone and other devices. The updated deal was worth billions of dollars to both companies and cemented their status at the top of the tech industry's pecking order. 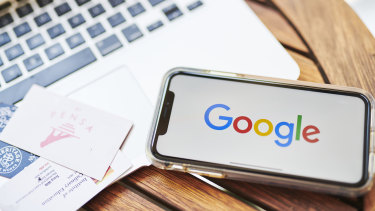 Google is the default search engine on many Apple products, including iPhone.Credit:Bloomberg

Now the partnership is in jeopardy. Last week the US Justice Department filed a landmark lawsuit against Google — the US government's biggest antitrust case in two decades — and homed in on the alliance as a prime example of what prosecutors say are the company's illegal tactics to protect its monopoly and choke off competition in web search.

The scrutiny of the pact, which was first inked 15 years ago and has rarely been discussed by either company, has highlighted the special relationship between Silicon Valley's two most valuable companies; an unlikely union of rivals that regulators say is unfairly preventing smaller companies from flourishing.

Apple and Google are joined at the hip, even though Cook has said internet advertising, Google's bread and butter, engages in "surveillance" of consumers and even though Steve Jobs, Apple's co-founder, once promised "thermonuclear war" on his Silicon Valley neighbour when he learned it was working on a rival to the iPhone.

Apple and Alphabet, Google's parent company, worth more than $US3 trillion combined, do compete on plenty of fronts, like smartphones, digital maps and laptops. But they also know how to make nice when it suits their interests. And few deals have been nicer to both sides of the table than the iPhone search deal.

Nearly half of Google's search traffic now comes from Apple devices, according to the Justice Department, and the prospect of losing the Apple deal has been described as a "code red" scenario inside the company. When iPhone users search on Google, they see the search ads that drive Google's business. They can also find their way to other Google products, like YouTube.

A former Google executive, who asked not to be identified because he was not permitted to talk about the deal, said the prospect of losing Apple's traffic was "terrifying" to the company.

The Justice Department, which is asking for a court injunction preventing Google from entering into deals like the one it made with Apple, argues that the arrangement has unfairly helped make Google, which handles 92 per cent of the world's internet searches, the centre of consumers' online lives.

Online businesses like Yelp and Expedia as well as companies ranging from noodle shops to news organisations often complain that Google's search domination enables it to charge advertising fees when people simply look up their names, as well as to steer consumers toward its own products, like Google Maps. Microsoft, which had its own antitrust battle two decades ago, has told British regulators that if it were the default option on iPhones and iPads, it would make more advertising money for every search on its rival search engine, Bing.

What's more, competitors like DuckDuckGo, a small search engine that sells itself as a privacy-focused alternative to Google, could never match Google's tab with Apple.

Apple now receives an estimated $US8 billion to $US12 billion in annual payments — up from $US1 billion a year in 2014 — in exchange for building Google's search engine into its products. It is probably the single biggest payment that Google makes to anyone and accounts for 14 to 21 per cent of Apple's annual profits. That's not money Apple would be eager to walk away from.

In fact, Cook and Pichai met again in 2018 to discuss how they could increase revenue from search. After the meeting, a senior Apple employee wrote to a Google counterpart that "our vision is that we work as if we are one company," according to the Justice Department's complaint.

A forced breakup could mean the loss of easy money to Apple. But it would be a more significant threat to Google, which would have no obvious way to replace the lost traffic. It could also push Apple to acquire or build its own search engine. Within Google, people believe that Apple is one of the few companies in the world that could offer a formidable alternative, according to one former executive. Google has also worried that without the agreement, Apple could make it more difficult for iPhone users to get to the Google search engine.

A spokesperson for Apple declined to comment on the partnership, while a Google spokesperson pointed to a blog post in which the company defended the relationship.

Even though its bill with Apple keeps going up, Google has said again and again that it dominates internet search because consumers prefer it, not because it is buying customers. The company argues that the Justice Department is painting an incomplete picture; its partnership with Apple, it says, is no different than Coca-Cola paying a supermarket for prominent shelf space.

Other search engines like Microsoft's Bing also have revenue-sharing agreements with Apple to appear as secondary search options on iPhones, Google says in its defence. It adds that Apple allows people to change their default search engine from Google; though few probably do because people typically don't tinker with such settings and many prefer Google anyway.

Apple has rarely, if ever, publicly acknowledged its deal with Google and, according to Bernstein Research, has mentioned its so-called licensing revenue in an earnings call for the first time this year.

According to a former senior executive who spoke on the condition of anonymity because of confidentiality contracts, Apple's leaders have made the same calculation about Google as much of the general public: The utility of its search engine is worth the cost of its invasive practices.

"Their search engine is the best," Cook said when asked by Axios in late 2018 why he partnered with a company he also implicitly criticised. He added that Apple had also created ways to blunt Google's collection of data, such as a private-browsing mode on Apple's internet browser.

Van Dijk - best Central defender of 2020, Trent-right, Robertson-left (ESPN)
Massimiliano Allegri: Ronaldo is a top player in terms of mentality. He has a new goal every year
Borussia Dortmund presented a collection with Spongebob as part of a deal with Nickelodeon
Woodward on Manchester United and trophies: there is a lot of work Ahead to achieve the stability needed
Neuer - best goaltender in 2020, Alisson-2nd, Oblak-3rd (ESPN)
Liverpool are Interested in 21-year-old Leipzig defender Konate
Niko Kovac: I'm Waiting for Golovin to return. But it might be better to wait another week or two
Source https://www.theage.com.au/business/markets/apple-and-google-s-web-controlling-pact-under-threat-in-us-lawsuit-20201026-p568hq.html?ref=rss&utm_medium=rss&utm_source=rss_business