Former NSW deputy premier John Barilaro has been awarded $715,000 in his high-profile defamation case against Google, after a judge found he was subjected to a “relentless and vicious campaign” of cyberbullying that led him to resign from politics prematurely.

Barilaro sued the internet giant, which owns YouTube, and political commentator Jordan Shanks in the Federal Court last year over two videos published on the Friendlyjordies channel in 2020 accusing him of corruption. 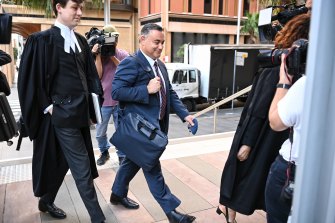 John Barilaro arrives at the Federal Court during his trial.Credit:Nick Moir

The first video, bruz, focused on Barilaro for more than 26 minutes and was filmed inside his investment property in the NSW Southern Highlands. The second, Secret Dictatorship, made a passing reference to him.

Google agreed the videos defamed Barilaro by suggesting he was a corrupt conman who committed perjury, should be jailed for perjury and acted corruptly by blackmailing councillors. The company initially argued a range of defences, but these were dropped shortly before and during the trial.

As a result, a four-day trial in March was solely to determine how much Google should pay in damages. The tech giant became a publisher of the videos in December 2020, when it refused to remove them.

On Monday, Justice Steven Rares said politics was not for the faint-hearted, however, the videos about Barilaro were deeply offensive, racist and vilified him.

He said he would refer Shanks and Google to the registrar of the Federal Court for consideration of a possible contempt prosecution, after videos were published during the case that made claims about his lawyers.

Barilaro’s case against Shanks was settled in November last year when Shanks issued an apology, edited the videos and paid $100,000 in legal costs.

Barilaro’s barrister Sue Chrysanthou, SC, had called for her client to receive damages “at the top of the range” for the “malignant” videos, which spurred harassment online and in person.

She said there had been an extreme level of aggravating conduct in the case, including Shanks criticising Barilaro’s lawyers and selling a keychain depicting him as a scrotum.