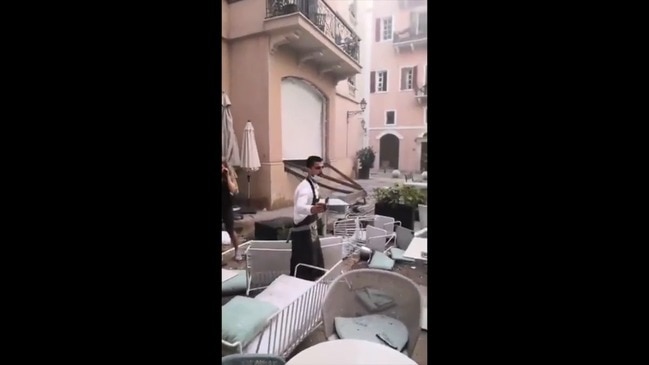 It was an ideal shot for a wedding video: the bride smiling in a quiet Beirut square. Mahmoud Nakib captured it, and was panning past the bride to take in her bouquet when the scene was shattered by a violent explosion ripping across the city. Nakib’s video shows the bouquet and the bride sent flying by the blast. Glass shatters and dust fills the air. The bewildered couple stand and look as alarms sound. Thankfully, the bride and groom are unharmed and able to walk away. Nakib said they took refuge at a house before dining at a small restaurant later that evening. The next day, Lebanon was still reeling, as the death toll from the massive explosion, at a portside warehouse, reached at least 100, with thousands wounded. Prime Minister Hassan Diab declared Wednesday, August 5, a national day of mourning, and appealed for international assistance. Credit: Mahmoud Nakib via Storyful

Pep Guardiola: no one cares about the players. There were 2 weeks of pre-season, and now matches every 3 days, and so 11 months
Akanji about 0:2 from Augsburg: Borussia showed too little in attack and defense
Hummels 0:2 in Augsburg: Borussia played well in many aspects, but did not create enough chances
Schalke have not won the Bundesliga in 18 consecutive rounds. The total score of the first two games of the season is 1:11
Real won with the help of VAR and decommissioned forwards. Jovic earned a penalty, mayoral a penalty
Robles on refereeing the match with Real Madrid and VAR: dubious episodes are always Interpreted in favor of top clubs
Conte on 4:3 with Fiorentina: impressed with Inter's attack. We didn't have enough balance, we paid for it
Source https://www.news.com.au/national/beirut-blast-interrupts-brides-photoshoot/video/1bbd50089a573c06ad6ea8b925687417