Rising prop Angus Bell and Manly centre Lalakai Foketi will start against the Reds at the SCG this weekend as the Waratahs fight to keep their season alive.

Foketi starts at outside centre in place of youngster Joey Walton, who moves to the bench. The change up means talented Junior Wallabies star Mark Nawaqanitawase drops out of the 23. 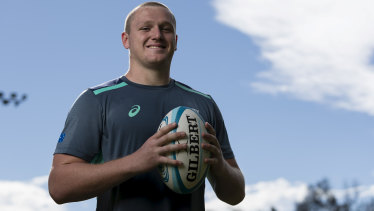 Angus Bell returns for the Waratahs in their must-win clash with Queensland on Saturday. Credit:Brook Mitchell

The return of Junior Wallabies captain Bell is a huge boost for the NSW pack as they stare down one of the most formidable tight fives in the competition. The Sydney University prop was nursing a back injury.

And halfback Jake Gordon is expected to reclaim the No.9 jersey after coming back from a hamstring injury, while captain Rob Simmons is still touch and go with a fractured rib.

The Waratahs are sitting second last on the Super Rugby AU table and must beat one of the form sides of the season to keep their play-off hopes alive.

Queensland got the better of NSW in their first clash, winning a heated encounter 32-26. The Brad Thorn-coached side has built nicely through the season, while the Waratahs have delivered some inconsistent performances.

Second-rower Ned Hanigan said the revenge factor would put extra "fire in the belly" for his side.

"Throughout the season we feel we've taken a few steps in the right direction and then in that Rebels game we weren't really happy with our performance and that's left a little fire in the belly as well," Hanigan said.

"There's always plenty to play for and I think the Queensland v NSW game is something that every player from both sides wants to be a part of. You've got a trophy on the line and it's that rivalry you want to be a part of. Round one against them is adding to it."

The Waratahs are coming off a bye week, while the Reds will be full of confidence and determination after narrowly losing their battle with the Brumbies last week.

Also in action in round five are the Rebels, who play the Brumbies at Leichhardt Oval on Friday night.

The Force have the bye and will relocate to Kingscliff, in far north NSW, for the next few weeks. Their home games against the Waratahs (round seven) and Reds (round eight) will be moved to Cbus Super Stadium on the Gold Coast.

Rugby Australia officials confirmed the Queensland border closure would not affect Super Rugby AU, with a government exemption in place allowing teams to travel in and out of Queensland on chartered flights.

Chelsea have conceded the most away goals in the Premier League since the start of last season - 42
Koeman convinces BarSU to buy Depay. Barcelona manager Ronald Koeman still wants to see Lyon forward Memphis Depay in the team
Hasselbaink on Tiago Silva: He's still a little out of shape. Surprised to see him start
The 43-year-old captain of Montpellier plays 30+ matches every season. He doesn't drink alcohol and doesn't go to night clubs
Luis Suarez: I came to Atletico for trophies
Silva's mistake led to West Brom's goal. Tiago - Chelsea captain in his debut match in the Premier League
Kononov's daughter got sick. He decided to stay with his family in Moscow
Source https://www.smh.com.au/sport/rugby-union/bell-foketi-to-start-as-waratahs-summon-fire-in-the-belly-20200805-p55iw2.html?ref=rss&utm_medium=rss&utm_source=rss_feed

Your Weekly Horoscope for September 27 - October 4

Raiders coach claps back at critics

Should more ministers resign? Here's what readers are telling us

'I don't run from problems and challenges': Premier stares down calls for him to quit

Walk through the 2020 Archibald Prize

There's a plague about and it's making crime pay

‘The truth in me’: Trent Dalton’s secret inspiration

CLUE THAT CAUGHT A KILLER: Inside Claremont serial killer’s undoing