Finland's Valtteri Bottas will start the Formula One season on pole position after denying Mercedes teammate and six-time world champion Lewis Hamilton the top slot in Austria on Saturday.

The front-row lockout by Mercedes equalled Ferrari's record of 65, and the "Black Arrows" – their new livery a statement against racism – were in a private duel at the scenic Red Bull Ring. 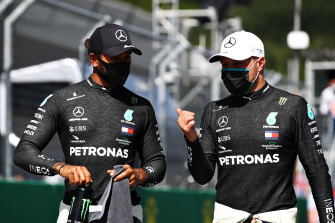 Lewis Hamilton (left) and Valtteri Bottas will start on the front row for the first F1 race of the season in Austria.Credit:Getty Images

Hamilton had started as favourite after dominating all three practice sessions but Bottas shifted up a gear just when it mattered.

"It feels really good, I've missed this feeling," said the Finn of a third career Austrian Grand Prix pole after 2017 and 2018, and one secured despite tracking across gravel and grass on his final flying lap.

"Our team have done an amazing job, we seem to be in our own league."

Hamilton was a mere 0.012 slower than the Finn's time of one minute 02.939 seconds, set on his first run, after lapping fastest on Friday and Saturday's final practice at the scenic Red Bull Ring. 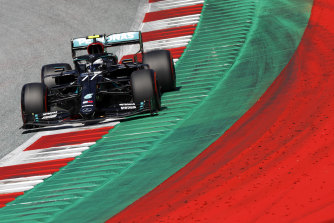 Bottas in action during qualifying.Credit:AP

"The car was great, I just didn't manage to put the greatest laps together," said the Briton.

Red Bull's Max Verstappen, winner of the past two races at his team's home circuit, qualified third – half a second slower than Hamilton – but as the sole driver in the top 10 on the medium tyres.

McLaren's Lando Norris, at 20 the youngest man in the race, will line up an impressive fourth.

"I wasn't so happy with the car, more oversteer in entry than I would like. But we will see, I think tomorrow is a different picture." 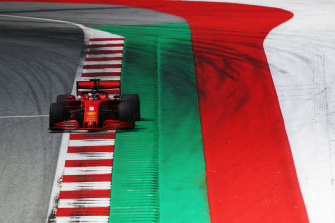 Sebastial Vettel will start outside the top 10.Credit:Getty Images

At the slower end of the grid, there was cheer for former champions Williams, last overall in 2019, with George Russell qualifying 17th and ahead of both Ferrari-powered Alfa Romeos as well as rookie teammate Nicholas Latifi.

"Today has exceeded my expectations, I knew we had made a step forward, but I didn’t think we would be in this position," said the Briton, who was just 0.003 slower than Haas's Kevin Magnussen.

"We have made a big step forward, and this is the closest we have been on pure pace."

Sunday's race is the first major global sporting event since the COVID-19 pandemic, with the 10 teams working in isolation and closely controlled conditions for health and safety.

Liverpool are close to buying a defender for Olympiakos Tsimikas. Medical check-up-this week
Barcelona intends to sign Bernardo Silva. City can get Semeda
Real are planning to buy Dybala and are ready to include Kroos or ISCO in the deal (Sport Mediaset)
Conte about Inter before the 1/4 Europa League: we Continue to progress, we become stronger
Piontek is Interesting to Fiorentina. Herta wants just over 20 million euros
Barzagli or Grosso will replace Pirlo in Juventus U23
Daudov about Akhmat: I am Sure that the team will Interact better with each new game
Source https://www.theage.com.au/sport/motorsport/bottas-pips-hamilton-to-start-f1-season-on-pole-in-austria-20200705-p55943.html?ref=rss&utm_medium=rss&utm_source=rss_feed