Broncos NRLW captain Ali Brigginshaw has slammed the Roosters camp over a "dirty" social media post, allegedly uploaded by one of their players, which stated the Maroons skipper was undeserving of her Dally M medal.

The Broncos took out their third NRLW title after beating the Roosters 20-10 in the decider on Sunday afternoon.

Brigginshaw told the Herald post-match her squad went into the match "fired up" over the social media post, which was uploaded to one of the player's private Instagram pages.

She said she did not wish to name the player in question.

"Come captain's run, the girls were seeing red," Brigginshaw said. "The women's game is a very, I would say, clean social media space. 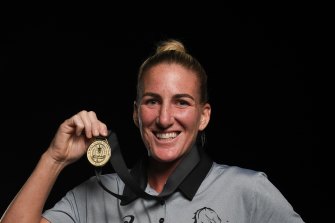 The Jillaroos star was instrumental in the decider on Sunday, with a silky pass to Tallisha Harden in the 44th minute bringing home the win for the Queensland side.

Brigginshaw said the post "made the tensions very high" ahead of the game and said it pushed the Broncos to bank a third straight title. She also said the player's Roosters teammates should have had a word to her about the post.

"Someone close to her should probably give her the heads up," she said. "I would go over there and tell you to take it off."

After the game, Brigginshaw was quickly whisked away for a post-game interview and said she was disappointed to not be able to have a word with the player. 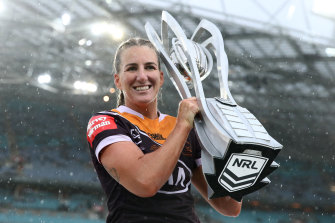 The Broncos took out their third NRLW title after beating the Roosters 20-10 in the decider on Sunday afternoon. Credit:Getty

The 30-year-old said she believed the post was the result of "immaturity".

"When you're young you say things and you don't realise what you've said means something to someone else," she said. "Hopefully, she learns and I have it all saved if anything were to come [of it further]."

Brigginshaw said her message to the player was that there was "no need for it in the game".

"I know you're a talented girl and you want to go far but social media is not a way for you to get your name out there and say hurtful things or negative things around other players," she said.

Brigginshaw won the 2020 Dally M female player of the year award last Monday, an achievement considered long overdue by most.

She was just the second Bronco to win the award and is widely considered the best female player to have ever played the game.

Under Brigginshaw, the Broncos have lost just one game and won all three premierships in the NRLW's three-year history.

It was the second grand final loss for the Roosters, who went down to the Broncos 34-12 in 2018's inaugural NRLW decider.

Anton Ferdinand on the racist scandal with Terry: I was sent a bullet in the mail. Insults in social networks came every hour
Manchester City have offered 19 million euros including bonuses for 17-year-old Argentine midfielder Sarmiento
Rehagel is a bandit from whom I will not accept an apology. The story of the worst injury in the history of the Bundesliga
Barcelona's presidential election will be held on January 24
Koke: to beat Bayern, you need to play a nearly perfect match. I hope their unbeaten streak ends tomorrow
Loew can return Muller, Boateng and Hummels to the German national team if there are a lot of injuries
Nacho about the Real Madrid game: That's not how titles are won. Working to get better
Source https://www.theage.com.au/sport/nrl/brigginshaw-slams-roosters-over-dirty-post-ahead-of-nrlw-grand-final-20201025-p568gh.html?ref=rss&utm_medium=rss&utm_source=rss_feed

AFL to have one mid-season rookie draft in 2021