British billionaire Lord Alan Sugar has joined a growing list of the rich and famous who have been granted permission to skip Australia's government-run hotel quarantine and wait out the 14 days of isolation privately.

Lord Sugar is the new host of Celebrity Apprentice Australia, a reality show being produced by Warner Bros for Nine, owner of this masthead. He flew into Sydney last week and a Nine spokesman said filming would start soon after quarantine finished.

A NSW Police spokeswoman said the British lord and his partner were quarantining privately and would be required to abide by the same regulations as other returned travellers. 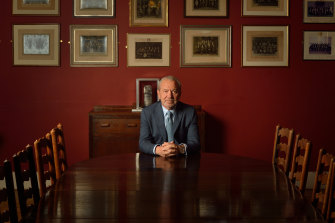 "The couple submitted a proposal to acquire appropriate, independent locations to be nominated as 'Quarantine Facilities' as allowed under the Public Health Order," she said.

Lord Sugar, the founder of Amstrad and other businesses, has been married to Ann Simons since 1968.

He arrived in Australia on an Emirates flight last week, tweeting that it was his first trip on a commercial airline in 25 years - he normally travels by private jet.

"I have never experienced service like it in all my life," he said. "It was fantastic. Both on the ground and in the air. Amazing. For the sceptics, it was fully paid for, not free."

Lord Sugar responded to several people asking whether he would have to quarantine, saying he had to have a COVID-19 test to board the plane, wear a mask during the flight, and spend 14 days in isolation with a test after three days and 10 days.

"Same rules for me and a tosser like you," he said to one Twitter user. He did not directly answer questions about whether it would be regular hotel quarantine.

A Nine spokesman said: "Bringing Lord Alan Sugar to Australia has been months in the making, and all the regular processes were followed, with no special treatment being given."

All international arrivals are required to quarantine for 14 days. In the early days of the pandemic returned travellers could isolate at home but since the end of March they have been forced to stay in hotels with security enforcing the quarantine rules - in NSW this is managed by the police.

Initially the cost was borne by the taxpayer but since July returned travellers have had to pay at least $3000 for their stay in hotel quarantine.

Premier Gladys Berejiklian has said previously there would be "no exceptions" to hotel quarantine but it has since emerged that a number of celebrities have been able to make their own quarantine arrangements if there is a suitable location and they pay the security costs and abide by the same restrictions. Nicole Kidman and Keith Urban received approval to isolate at their Southern Highlands estate in July.

This has happened in other states too. In Queensland, Dannii Minogue and her 10-year-old son were allowed to isolate at home on the Gold Coast in July, while this month Tom Hanks and crew members for the Elvis Presley biopic helmed by Baz Luhrmann were granted permission to stay in a Gold Coast hotel that was not one of the designated quarantine hotels. The production has hired out several floors and paid for its own security.

Although only crossing state borders, billionaire Kerry Stokes was given exemption from quarantine altogether when he flew from Sydney to Perth in July and attended a business breakfast with Western Australia Premier Mark McGowan.

Everton and Liverpool in the top 2 at the end of the round in the Premier League for the first time in 27 years
Arteta about 0:1 with Leicester: I Don't know why the hell our goal was canceled. It is difficult to create space when 10 people are sitting behind the ball line
Rodgers on 1-0 with Arsenal: Leicester deserved to win. Vardy is a world-class player
Juve without Ronaldo could not beat Verona and Crotone in Serie A
Vardy has scored 11 goals in 12 games against Arsenal in the Premier League. Only Rooney has more
15,000 Teddy bears were planted at the Heerenveen match as part of a campaign to fight cancer. Toys sold for 230 thousand euros
Adidas and Pharrell Williams have reinvented the old forms of Real Madrid, Arsenal, Manchester United, Bayern Munich and Juve. The design is hand-made and celebrates imperfection
Source https://www.theage.com.au/politics/nsw/british-billionaire-and-tv-host-alan-sugar-allowed-to-quarantine-privately-20200919-p55x96.html?ref=rss&utm_medium=rss&utm_source=rss_feed

How you can get free rent at Coast uni housing