Irae Simone says he's ready for a Test debut and has a sneaking suspicion his Auckland-based parents might be tempted to make a dash to Sydney if Wallabies coach Dave Rennie agrees with him.

Simone is one of a host of Wallabies in line to replace the injured Matt To’omua at No.12 against the All Blacks in the third Bledisloe Cup clash next Saturday.

The former Waratahs centre, whose career has flourished during the past two seasons in Canberra, is within touching distance of a Test debut in his favoured inside-centre position. 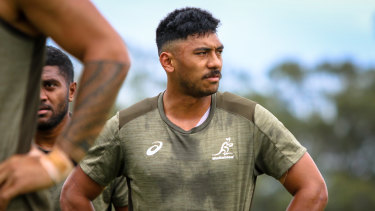 Irae Simone has come into the reckoning for a Test debut against the All Blacks. Credit:Andrew Phan/Wallabies Media

With To’omua all but ruled out for the rest of the international season with a groin injury, Rennie has a couple of options to fill the void at No.12.

The easiest and most likely option would be to promote Simone, in a like-for-like swap, while the other involves No.10 James O’Connor shifting out and uncapped Noah Lolesio taking the reins at five-eighth.

Simone's Brumbies coach Dan McKellar has an inkling as to which way the way the Wallabies will go.

“He’s ready to step up and handle that,” McKellar said this week. “They need that second playmaker and that second voice. He certainly gives you that communication, that eyes and that vision you need. Irae won’t let them down.”

Without getting ahead of himself, Simone knows a door has opened and isn't willing to let the chance slip.

“It would be huge ... words can't describe it,” Simone said of the prospect of a Test debut. “All the sacrifices you and your family had to go through ... it makes you reflect on your journey and that’s what I’m truly grateful for. Hopefully I do get the opportunity and it’s something that no one can take away from me if I get the opportunity. It’ll be a memory I won’t forget and hopefully we get the win.

“I train like I’m going to play. My role is get my job right, learn my role, learn my detail, get my shit right and own it. The team stuff will fall into place. Nothing’s been said though. There’s a lot of chat and white noise.”

Former Wallaby Drew Mitchell believes Simone should wear the No.12 jersey, with O'Connor retained at first receiver for a match Australia need to win to keep the Bledisloe series alive. 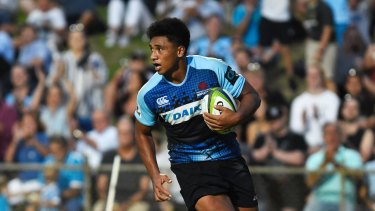 Simone during a trial match with the Waratahs in 2017. Credit:James Brickwood

Simone, 25, was born in New Zealand but moved to Australia in 2014 to take up a gig with South Sydney's junior rugby league sides. He switched codes and won a Shute Shield title with Northern Suburbs in 2016 before making his debut for the Waratahs in 2017.

After limited opportunities in 2018, Simone made the move south and hasn’t looked back.

His parents are still in Auckland and he says catching up with them last week before and after Australia’s 27-7 loss at Eden Park was difficult. 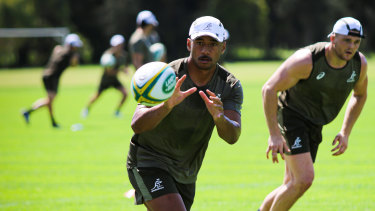 “I haven’t seen them in a very long time and I was crying at the stadium because I couldn’t see them after,” said Simone, whose daughter and partner are with him in camp in the Hunter Valley. “Saying goodbye at the stadium was probably the toughest one for me.”

However, with New Zealanders now able to fly to Australia, Simone's folks might cop the two weeks of quarantine on the way home to see their boy.

“I’m not going to lie, they probably will try and come over," he said. "They probably wouldn’t tell me. That will probably hurt my mum and dad a bit [if they don't come].

“My family is really close, so they’d be pulling up a chair at my grandparents' house and putting it on the big screen [if they stay in New Zealand].

“I think of my parents. The times they had to wake up early in the mornings, take me to training, drive me an hour to games … little things all add up. It’s the people along the way and I’m always truly grateful for that.”

Anton Ferdinand on the racist scandal with Terry: I was sent a bullet in the mail. Insults in social networks came every hour
Manchester City have offered 19 million euros including bonuses for 17-year-old Argentine midfielder Sarmiento
Rehagel is a bandit from whom I will not accept an apology. The story of the worst injury in the history of the Bundesliga
Barcelona's presidential election will be held on January 24
Koke: to beat Bayern, you need to play a nearly perfect match. I hope their unbeaten streak ends tomorrow
Loew can return Muller, Boateng and Hummels to the German national team if there are a lot of injuries
Nacho about the Real Madrid game: That's not how titles are won. Working to get better
Source https://www.smh.com.au/sport/rugby-union/brumbies-star-ready-willing-and-able-if-rennie-and-wallabies-need-him-20201024-p5687l.html?ref=rss&utm_medium=rss&utm_source=rss_feed