Matt Jones said it “wouldn’t be a good look” if the US PGA Tour bans members who have signed with Greg Norman’s Saudi-backed breakaway league as he insisted he had no contact with his idol before jumping ship to the mega-money series.

Jones, 42, is the highest-profile of the four Australians to join the LIV Golf Tour, which will host its inaugural event outside London next week. The 48-man field will compete for a $35 million purse in a 54-hole event featuring no cut.

The two-time Australian Open champion said his decision was based around his family, given Norman’s tour offers shorter events under shotgun starts.

But he’s now awaiting recrimination from the US PGA Tour, which has threatened sanctions for players who have signed for the competing tour, headed by two-time major winner and former world No.1 Dustin Johnson.

“I’m very happy with the decision I’ve made,” Jones told Golf Channel during practice for Jack Nicklaus’ Memorial Tournament in Ohio. “The PGA Tour is an amazing company and business and I think this can only benefit me as well.

“Upfront money is nice, but it’s not like it’s a life-changing amount for me at all. But the purses are nice, the smaller fields, the team aspect of things and three-day tournaments. 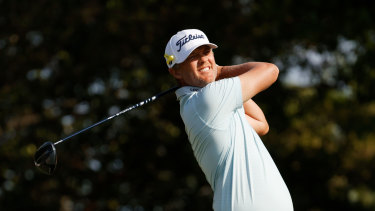 Matt Jones is one of the confirmed players for the debut tournament of the Greg Norman-run series.Credit:Getty

“We’ll see what happens [with the PGA Tour]. I don’t think banning PGA Tour players from playing a global game is a good look for the PGA Tour and I hope it doesn’t come to that.”

Jones, one of 16 players inside the world’s top 100 to peg it up at LIV Golf’s first event outside London, will fly to the United Kingdom after competing in what could be his final event on world golf’s most recognisable tour.

“As communicated to our entire membership on May 10, PGA Tour members have not been authorised to participate in the Saudi Golf League’s London event under PGA tournament regulations,” the PGA Tour said in a statement.

“Members who violate the tournament regulations are subject to disciplinary action.”

Golf Australia and the PGA of Australia are yet to decide on what it means for its members, with the country’s two flagship events, the Australian Open and Australian PGA, now co-sanctioned as part of Europe’s DP World Tour.

The DP World Tour has also threatened members who join the Saudi-funded league with penalties.

Asked how much of an influence Norman was in his decision, Jones said: “Greg has been an idol of mine from when I was a kid.

“But I did not have any contact with him regarding this. This was totally on me and my team. I wanted to keep it separate and make a call based on what I thought was best for myself and my business and for my family and for hopefully the future of golf.”

Sports news, results and expert commentary. Sign up for our Sport newsletter.