The French, who defeated Spain 3-2 in the other semi-final in Lille, will have home advantage in the November showdown and hope to avenge their 3-2 loss to the Croatians in the 2016 semi-final.

The self-styled men's 'World Cup of Tennis' will also see a repeat of the football World Cup final in Russia with the French, 10-time Davis Cup champions, again favourites to beat the Croatians, whose only victory came in 2005.

Yet for a moment, after Coric had capitulated 7-0 in the first set breaker and 13-11 in the third set decider, the shocked fans in the Dalmatian resort feared Croatia could be on the wrong end of one of the competition's unlikeliest comebacks.

Coric, though, demonstrated why he is seen as one of the sport's best prospects, holding his nerve against the equally brilliant young American and proving too solid over the final two sets as he finally prevailed after four hours and six minutes.

At 2-0 down after Friday's singles, there didn't appear the remotest chance of a US team without their top two players John Isner and Jack Sock recovering to reach a first final in 11 years.

Only when 40-year-old Mike Bryan and Ryan Harrison fought courageously to claw out a five-set doubles win on Saturday were the Americans given even faint hope of contesting the last final to be staged under the traditional Davis Cup format.

But Courier was rewarded for a bold, if slightly desperate-looking risk when he rested his No.1 Steve Johnson and instead threw Querrey into the must-win fourth rubber even though the 30-year-old had never previously beaten Cilic in six attempts. 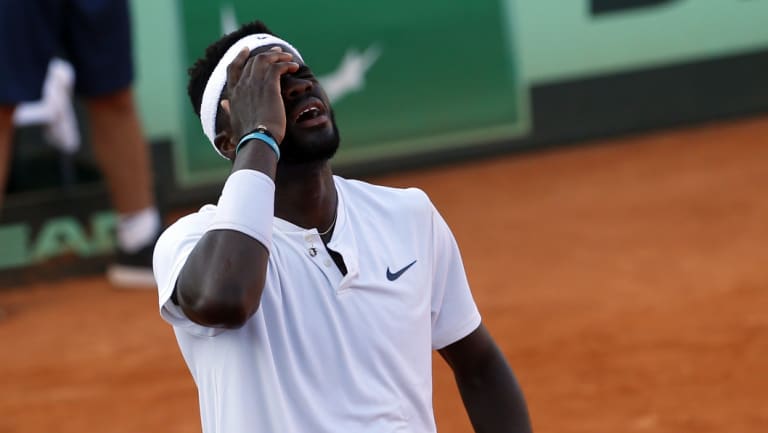 Gallant: Tiafoe fell short as the US battled bravely.

Cilic had also become the most successful Croatian Davis Cup player in history on Friday when winning his 37th rubber against Tiafoe, but the world No.6 was found wanting when, after winning the opening set on a tiebreak, he stood on the verge of a commanding lead.

He took a 6-1 lead in the second set tiebreak in superb fashion only to crumble under Querrey's onslaught with the American world No.61 winning seven straight points.

"I just hung in there. After being 6-1 down in the tiebreak, I just played aggressively and from then on the pressure just builds," said Querrey.

That was unbelievable. This is the most special moment of my whole life.

Cilic's early dominance on the outdoor clay, cheered by an enthusiastic crowd in the Dalmatian resort, then evaporated as Querrey took the next two sets to win in three hours and eight minutes.

In Lille there was relief the Croatians won as it guaranteed the final would be a home tie for France.

Yannick Noah, who will be seeking a fourth win as French captain, will be wary of the Croatian firepower. He was captain two years ago when Cilic contributed all three points to the home side's semi-final win in Zadar.

"That was kind of a bitter feeling for me because I felt we were really close and we went and lost it," recalled Noah. "Now, with the chance of back-to-back wins, this is going to be an opportunity for us to go into the history books."

Zidane on La Liga: there are six finals Left. We are fine, but it doesn't mean anything
The drunk at the party in honor of the transition to Barca was crying with happiness on his father's shoulder
Christophe Dugarry: Messi really could have given Griezmann more passes. Antoine lost confidence
Sane passed a medical for Bayern and went to meet with the club's management
Neuer - in goal, Hakimi and Davies burn out the flanks, in front-Sancho, Muller and Lewandowski. Collected Dreamtime Bundesliga-19/20
Casillas is almost not on the video in honor of Spain's victory at Euro 2012. Perhaps this is due to his promotion to the post of President of the FFI
Setien's future in Barca is under threat. The players don't support it
Source https://www.theage.com.au/sport/tennis/cool-coric-steers-croatia-into-davis-cup-final-against-france-20180917-p5045z.html?ref=rss&utm_medium=rss&utm_source=rss_feed

The man from the right who dished the dirt on Trump

Afterpay and Tesla - the stocks that divide the market

Chinese military has links to supplier of 5G equipment in Australia

Is Ben Brown a one-trick pony? How Roo can put the fear factor into his game

What is Modern Monetary Theory and is it THE answer?

In the 32 years since they were formed, the Broncos have rarely got things this wrong

Dozens dead in landslide at Myanmar jade mine

'Make sure he leads and don’t look back': O'Hara to set Spaceboy free

CBA confirms future of startup Beem It under review

Local containment model ‘most likely’ to be effective: Health Minister