Elopements to rural towns, two-part wedding receptions and luxurious "micro" celebrations with a handful of guests and fewer "Kardashian-like" florals are all emerging as key trends as the pandemic forces a major rethink of what constitutes a "modern" (and appropriate) way to tie the knot.

As couples scheduled to marry well into 2021 are being forced to redraw their plans, limits on gatherings are likely to inspire couples to split their reception into separate events for family and friends, like a two-part mini-series, according to one of Melbourne's top events companies.

Bruce Keebaugh, of The Big Group, has 680 wedding clients in limbo because of what he says is a lack of certainty around crowd limits in Victoria over the coming summer.

"We had couples rebooked in September thinking [it would be] fine, now they have moved to December [but] now they have effectively been cancelled again," Keebaugh says. "It’s almost a two-year wait for these couples and it’s emotionally tough [on them]."

Still, he sees the pandemic as an opportunity to rethink how weddings are celebrated. His predictions include weddings that start with a ceremony and intimate dinner for family, followed by a brunch for friends the next day, more outdoor celebrations and Thursday becoming "the new Saturday".

"I hope we unpack what a wedding used to look like," he says. "Having had 10 years of 'Kardashian-esque' floral [displays], it was getting a bit '101'. The social dialogue of what a wedding needed to be has changed. Out of austerity and humility ... there will be a new 'new', and I find that very exciting." 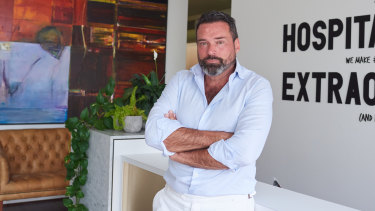 Less Kardashian-esque ... The Big Group's Bruce Keebaugh welcomes an overhaul of how weddings are celebrated.Credit:Josh Robenstone

Many couples are having to cut their guest lists in line with state restrictions, giving rise to a trend in "micro weddings". But, as Sydney planner Belinda Brett says, that doesn't necessarily mean a cut to the overall cost.

"Couples are inviting fewer guests and spending the same, if not more, on their wedding, so they're really opting to create a luxurious experience in terms of food, styling and entertainment," she says.

Brett's clients are looking to lavish settings with a Tuscan or Greek Islands feel, which may also be a way to bring a destination wedding feel to an occasion that can't be held overseas as planned.

Keebaugh says catering for "virtual guests" will become a fixture of Australian weddings, and couples will invest more in catering and technology so those who cannot be there physically can still share a quality experience.

Catherine Williams, of wedding planners Will & Jac, predicts a surge in couples eloping to rural and regional areas, while others will opt for "marry now, party later". She is advising clients to look at dates from July 2021 onwards for greater certainty around numbers and hosting travelling guests. 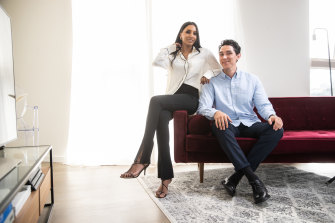 Melbourne couple Vydia Rishie and Sam Howell are hoping they won't have to wait that long for their wedding, which was originally set for October 2. As of this week, they have multiple dates pencilled in between November and February, depending on when they can have a celebration that meets health requirements but also ticks their "non negotiables".

"Ideally we would love Melbourne to be safe enough for borders to be fully open and for our guests to not have to wear masks," Howell says. "For us, having a ban on dancing was definitely a non-negotiable."

After considering a two-part wedding, Rishie and Howell decided to stick to one event, cutting their guest list in half, from 100 to 50.

"It’s important to have a sense of normalcy and keep traditions alive even within a pandemic," Rishie says. "It’s all about having balance, so we are open to making some chic masks for our guests or styling an extra-long table to cater to social distancing rules."

Keebaugh this week urged the Andrews government to provide clearer caps for event venues for the summer months. The current guidelines state that from November 23, venues "open with density quotient and patron caps". The Department of Health and Human Services has been contacted for clarification.

Everton and Liverpool in the top 2 at the end of the round in the Premier League for the first time in 27 years
Arteta about 0:1 with Leicester: I Don't know why the hell our goal was canceled. It is difficult to create space when 10 people are sitting behind the ball line
Rodgers on 1-0 with Arsenal: Leicester deserved to win. Vardy is a world-class player
Juve without Ronaldo could not beat Verona and Crotone in Serie A
Vardy has scored 11 goals in 12 games against Arsenal in the Premier League. Only Rooney has more
15,000 Teddy bears were planted at the Heerenveen match as part of a campaign to fight cancer. Toys sold for 230 thousand euros
Adidas and Pharrell Williams have reinvented the old forms of Real Madrid, Arsenal, Manchester United, Bayern Munich and Juve. The design is hand-made and celebrates imperfection
Source https://www.theage.com.au/lifestyle/fashion/couples-embrace-micro-and-multi-weddings-or-just-run-away-20200915-p55vq4.html?ref=rss&utm_medium=rss&utm_source=rss_feed