Labor's Chris Bowen has criticised the government's coronavirus tracing app after it failed to find any close contacts of an infected person who had not already been identified manually.

In Victoria, where there have been 1437 cases in the past week, and NSW, where there is an outbreak associated with a pub at Casula in Sydney's south-west, no contacts had been identified solely through the COVIDSafe app, state health department sources said. 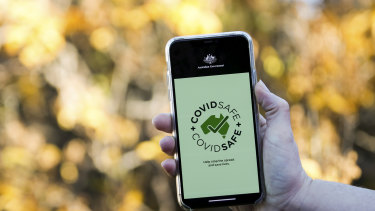 More than 6.6 million Australians now have the COVIDSafe app on their phones.Credit:Alex Ellinghausen

In Queensland and South Australia, no one diagnosed with the virus had downloaded the app while in Western Australia there had been no cases of community transmission to make it useful.

"It's played no role in effectively finding anybody who's been exposed to COVID19 ... this is a $2 million failure," Mr Bowen, Labor's health spokesman, told Nine News.

The $2 million app – launched on April 26 and downloaded more than 6.6 million times so far – was built to assist state and territory contact-tracing teams uncover close contacts of COVID-19 cases. It collects data that can identify when users have been within 1.5 metres of other users for more than 15 minutes in public places.

On Monday, NSW Labor leader Jodi McKay said party colleague Anoulack Chanthivong had been at the Crossroads Hotel in Casula – which has been linked to 21 cases – and had the app but had not been contacted.

Another hotel patron, who did not wish to be named, said: "I haven't had any alerts; I don't know if it's working."

The federal government said the app was working and data was being retrieved by some health departments. However, Nine News confirmed through state health department sources no contacts had been reached beyond what contact tracers had been able to do manually.

After it was launched in April, the Prime Minister described it as "sunscreen" against major outbreaks and "Australia's ticket to a COVID-safe Australia".

While other countries have abandoned their own versions of a tracing app, opting for versions made by Apple and Google, the federal government has said it will stick with COVIDSafe and wants more people to download it.

There are 2 cases of coronavirus in Atletico. The match with Leipzig – August 13
Renzo Ulivieri: Pirlo is one of the most profound thinkers of world football. He knows more than most coaches
Pirlo wants to sign Tonali at Juve. Alternative – Locatelli
Before the match with Real Madrid, sterling watched a video of the defeat by Tottenham in the 2018/19 Champions League
Andrea Pirlo: I am Flattered to have received such respect and trust from Juventus
Former Manchester United midfielder angel Gomez has moved to Lille. He will spend the season on loan in Boavista
Tevez has extended his contract with Boca juniors until 2021
Source https://www.theage.com.au/politics/federal/covidsafe-app-a-2-million-failure-bowen-20200713-p55boq.html?ref=rss&utm_medium=rss&utm_source=rss_feed