Curious Transport job not a Burden to director’s exit 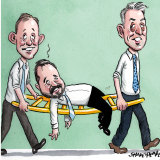 The appointment of Brad Burden, Premier Gladys Berejiklian’s former strategy chief, to a lucrative, unadvertised Transport for NSW gig has been of special interest to this column.

For the record, Burden departed Macquarie Street in April and four months later landed a $256,000 six-month contract for a job which had not previously existed. Transport secretary Rodd Staples personally asked his executive director Matthew Vane-Tempest to see “if there is anything Brad has to offer” the department.

Vane-Tempest drew up the job specifications one day after speaking to Burden and fired off an email to deputy Transport secretary Peter Regan noting, “I have no idea what BB would be seeking for an engagement like this”.

This kind of arrangement, the department said, was “normal” (although, as the Herald reports today, these hiring practices are now under "external review").

Sadly for Vane-Tempest, we can report his time at the department will come to an end today.

We don’t know why except it has nothing to with Burden’s curious appointment. Nothing at all. That’s because a spokesman told us the department “can categorically rule out any link between Matthew Vane-Tempest leaving and the engagement of Brad Burden”.

Vane-Tempest’s abrupt departure has raised eyebrows — even among Labor MPs — given he’s a well-regarded operator. A missive to staff from deputy secretary Rachel Wheeler on Tuesday evening said Vane-Tempest would leave on Friday ahead of an organisational restructure that would merge the departments’ public affairs and marketing branches.

Despite Vane-Tempest’s seniority, it will be deputy executive director Anne Purcell who takes over the merged branches come Monday morning. Still, Purcell is only the acting boss. With Burden’s contract coming to an end next month, perhaps there’s a more permanent option around the corner.

PIE IN THE SKY

The former Labor sports minister presides over the sprawling municipality produced by the merger of Hurstville City and Kogarah City councils, the same pocket of democracy which graced this column in December after councillors met to discuss whether to cut its cheese and booze budget while dining on prawns, oysters and Christmas turkey.

(That meeting’s best contribution came from Labor councillor Kathryn Landsberry, who complained about her colleagues “undermining each other, backstabbing … scoring points off somebody, isolating people [and] spreading rumours about them”.)

This week Georges River Council was back to debate a more serious issue — rate increases.

And that brings us to Greene, who used the opportunity to recount at length an incident which occurred more than a decade earlier when he was on a family holiday in Queensland.

“We were walking down the street and I suggested, well we might have lunch, and buy some pies or sausage rolls, whichever the children wanted,” Greene began. “We went to the first pie shop and of course I said, ‘$3.50 for a pie ... we don’t spend $3.50 on a pie!’

“We walked up and down both sides of the main street of Coolangatta with my children ever the more hungry and eventually got back to the original pie shop because I couldn’t actually find a pie that was less than $3.50 in Coolangatta.”

This anecdote, apparently, was meant to illustrate how Greene was a miser and why the council should equalise different rates paid by residents in the two former local government areas (a decision which would bring in $19 million over the next decade). No, we don’t follow either.

Meanwhile, things make even less sense over at the City of Ryde.

With local government elections scheduled for September, former councillor Frank Rayner is putting together a ticket to stop the development of football fields around Gannan Park.

Unfortunately for Rayner, a chartered accountant in the area, he no longer lives nearby. Instead he has distributed a pamphlet advertising for a candidate he can back financially as “the name and face of a (very modest) election campaign”.

A strict criteria means Rayner is looking for someone who is “female … [of] western European descent … [a] good communicator … [and] conservative in both politics and spending (value shoppers preferred rather than spendthrifts)”.

The last we checked, earlier this week, Rayner had yet to find his candidate.

Deputy Premier John Barilaro has finalised his office after the departure of his long-serving chief-of-staff Mark Connell late last year. Siobhan McCarthy, who previously worked for former roads minister Duncan Gay, will take the top job after acting in the role for two months.

Lions roaring into 2020 after 'extraordinary' pre-season

'I've done nothing wrong': Reynolds relieved not to be suspended

There are only limited opportunities to defer capital gains tax

A 'living separately and apart' option can have significant benefits

What your dog is trying to tell you

Starc misses automatic Olympic qualifying height but still on the up

Home win has improving Starc on the way up for Tokyo

Wallis wants to be part of what the Bulldogs are building

A timeline of domestic abuse: Hannah Clarke and her children's last weeks

The hair-raising side of Opera

Josh Reynolds puts dramas behind him in trial loss to Panthers

Company directors to be liable under flagged wage theft laws

'The '90s comes through in everything I do': P.E Nation's Pip Edwards

Yumi Stynes: 'His death taught me not to wait to do what you really want to'

A former general store is transformed into a family home

My day on a plate: Greg Mathews

Golden Slipper the next aim for Tagaloa

Lost leaders: Women's sport is growing but where are the female coaches?

STADIUM ROARS FOR LITTLE LEGEND: Quaden gets a hero’s welcome

Little Quaden gets a hero’s welcome

Petracca off to a flier as Demons start road back

Moment that made Amanda Bynes crack

Blues and Harris put the bite on Bulldogs

Warriors release prop Lisone to link up with Titans

'I love him like family': Cklamovski ready to step out of Postecoglou's shadow

Sport Thought: an ode to Moorabbin

Saying a comic hello to a cruel world

Street Seen: my style is a little bit masculine with classic trousers

About Last Night: Would it be weird if we get together eventually?