Curnow comfortable with Carlton's sense of duty in hub

Carlton veteran Ed Curnow doesn't want footballers to be treated as heroes for their move to hubs, but says there is a sense of duty in what they're doing to keep the season rolling. 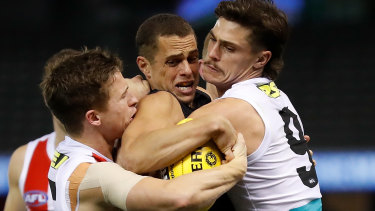 Carlton's Ed Curnow is wrapped up by Jack Billings and Jack Steele.Credit:Getty Images

Curnow, 30, opted to keep his young family at home in Victoria during his time away and believes players feel a sense of responsibility to the game to simply do their job, because they're lucky enough they can during the pandemic.

“The playing group is also really excited to play footy. That’s our job. There’s a certain feeling of duty to the game," the midfielder said ahead of the Blues clash with the Western Bulldogs on the Gold Coast on Sunday.

“It’s pretty fun, there’s been a lot of carry on. Yesterday we were throwing the tennis ball at each other in the pool … a lot of table tennis.

“It’s been enjoyable. Ask me in a couple weeks, I might change my answer," he joked.

He said players were making a sacrifice but should not be criticised for acknowledging there were difficulties in their situation despite the fortune they have in other areas.

“The environment at the moment with the pandemic worldwide and everyone has their own issues in life … to judge a group of players broadly is just unfair," he said.

“We never really know what is going on is someone’s life and I think right now it’s best to have some empathy and support.

“A lot of the guys are just really aware that us making this sacrifice to come away as a group and ‘hub up’ to keep the game going is benefiting I suppose the industry as a whole."

The Blues are much improved in 2020 but have only managed two wins. They come up against a rampant Bulldogs side on Sunday that have won three games on the trot in impressive fashion.

Ex-Sunderland midfielder Cattermole has finished his career. He did not leave the club even after relegation to the 3rd division
Xavi: Racism, sexism and other forms of discrimination must be eradicated by stopping games
Javier Mascherano: Messi is the main reason why Barcelona can beat any team
Barcelona is looking for a new coach. Pochettino, Koeman, Xavi are among the candidates (ESPN)
I just want to show you my dog. Klopp's cute video call to the Liverpool newcomer
Willian to Arsenal: third client Kia Joorabchian over the last year, for the contract was reduced officers of the club
Tiago Alcantara-Messi among the Midfielders. His ball movement and control of matches is an aesthetic pleasure
Source https://www.theage.com.au/sport/afl/curnow-comfortable-with-carlton-s-sense-of-duty-in-hub-20200711-p55b5l.html?ref=rss&utm_medium=rss&utm_source=rss_feed