Collingwood's torrid week took a brighter turn when frontline midfielder Adam Treloar was recalled for Friday night's clash with Essendon and Jordan De Goey aired his intention to remain at the Magpies beyond 2020. 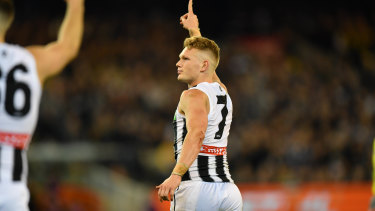 Adam Treloar is in for his first game of 2020. Credit:Joe Armao

Treloar comes into the Pies side in place of the suspended Steele Sidebottom, while forgotten defender Matt Scharenberg returns for Jeremy Howe (knee) and club favourite Travis Varcoe is in for John Noble (omitted).

The Bombers have opted against playing Conor McKenna, despite him having served his 14-day isolation after testing positive to coronavirus.

Sidebottom was suspended for four games on Wednesday for breaching the AFL's coronavirus protocols when he was found drunk and partially clothed on the streets of Williamstown after visiting Howe and former teammate Daniel Wells.

Howe, like Sidebottom one of the Pies' best in 2020, injured his PCL against GWS and requires surgery.

Treloar has not played for Collingwood since the 2019 preliminary final. He injured his hamstring in the pre-season and then injured it again early on in the AFL’s return to training following the COVID-19 shutdown. 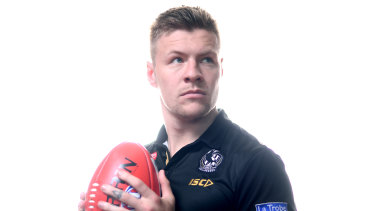 Meanwhile the out-of-contract De Goey told the AFL Exchange podcast on Thursday that he has opened talks to stay at Collingwood.

"Yeah I do [want to stay long-term]. Obviously it's a fantastic club and they gave me the opportunity in the beginning, so I definitely want to stay there, that's for sure," De Goey said.

"But come towards the end of the year we can work that stuff out. I've been speaking to the club a little bit currently which has been good. For me, I just want us to win games of footy and I'm trying to limit everything that distracts me outside of football from doing that."

The Bombers have brought in ruckman Andrew Phillips for his first game, as well as former North Melbourne and Williamstown midfielder Mitch Hibberd for the clash against Collingwood. 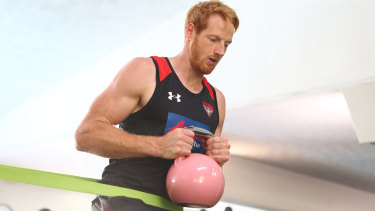 McKenna emerged from quarantine earlier this week but coach John Worsfold hinted on Wednesday there was a “risk versus reward” that would be too great for him to play.

The Bombers will give a first game to former Carlton ruck Phillips. He played 41 games across seven seasons for the Blues and GWS and impressed at the Bombers during pre-season.

Scharenberg, who impressed as a key defender in 2018 alongside Lynden Dunn for Collingwood, has not played since round 23 in 2019 when he fell out of favour at the Pies.

Varcoe, a high-pressure player and important goalkicker, has also not played since round 23 in 2019 and missed the Pies' finals campaign despite being fit.

Scharenberg is also an intercept defender, like Howe, but does not have the freakish leap of his injured teammate.

Meanwhile, Richmond have dropped Sydney Stack and Jack Ross for their clash against Melbourne. David Astbury is also out because of injury.

Poor-performing West Coast have dropped 2018 flag winner Lewis Jetta, as well as Tom Hickey, while Will Schofield is suspended and Jarrod Brander is injured.

Jeremy McGovern, a late out last week, comes into the side to play Sydney.

Dogs get key talls back

Easton Wood returns from injury to play the Kangaroos, as does Lin Jong. Josh Schache will play his first game of 2020, in for Aaron Naughton (ankle), Louis Butler (omitted) and Sam Lloyd (shoulder).

As expected, Nat Fyfe (hamstring) is out for Fremantle’s clash with Adelaide, with the lowly Crows yet to announce who will and won’t make the cut on an extended bench.

Matt Crouch is one of the inclusions on that extended bench.

Coach Of Brentford: We went from a mid-level team to the third team of the season. This is an incredible achievement
Burnley are not going to sell Tarkowski for less than 50 million pounds
Lester wants to rent Trincou at Barca with the obligation of ransom for 50 million pounds
Scott Parker: Fulham have a lot to progress. And I am happy about it
Manchester United are threatening to pull out of negotiations for Sancho if Borussia do not reduce the price from 120 million euros
Cesc about Casillas: You are a mirror to look into
Lone mascots are another symbol of the year
Source https://www.smh.com.au/sport/afl/de-goey-says-he-wants-to-stay-at-magpies-treloar-recalled-20200702-p558ho.html?ref=rss&utm_medium=rss&utm_source=rss_feed