The idea of Sydney as a disposable city where "perfectly good buildings" were bulldozed because they were ugly – as NSW Treasurer Dominic Perrottet playfully suggested this week – was "shameful" in the midst of a climate emergency, say top Sydney architects.

Thousands of Australian architects, engineers and builders have signed up to a growing international movement pledging to address climate breakdown and biodiversity loss as the "most serious issue of our time". 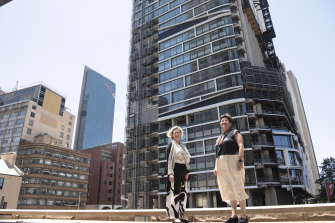 Kathlyn Loseby and Caroline Pidcock have spoken out to defend Sydney's existing buildings from the bulldozer.Credit:Steven Siewert

The spokesperson for Architects Declare in Australia, Caroline Pidcock said knocking down buildings in the midst of a climate emergency was "ridiculous".

Architectural firms who have signed up to Architecture Declare have committed to upgrading existing buildings where viable for extended use as a more carbon-efficient alternative to demolition. Similar declarations overseas, and by Australian builders, construction and engineering firms, are growing every day.

Not one of the buildings on Mr Perrottet's list was "falling over", said Ms Pidcock, a former president of the NSW branch of the Australian Institute of Architects. The Treasurer's "tongue in cheek" list of monstrosities included the Brutalist design Sirius building, the MLC building, Greenway Apartments, the Reserve Bank of Australia office on Martin Place and the Sydney Aquarium.

In an opinion piece in the Herald this week, Kathlyn Loseby, president of the NSW chapter of the Australian Institute of Architecture, said judging ugly buildings by appearance alone was demeaning.

Ms Pidcock said taking a wrecking ball to an existing building was wasteful and created waste.

"You are replacing good embodied energy – the carbon used to build – with more carbon," she said.

"This disposable city idea is a terrible recent phenomenon and it is criminal," she said. "In the age of climate change, the fundamental question is, 'Should it be demolished?' " While there were no hard and fast rules, she said demolition should be an "absolute last resort".

Ms Pidcock cited AMP's Quay Quarter Tower as a way of retaining and extending an existing structure. AMP's architects worked with consultants ARUP – a signatory to Engineers Declare – to maintain 68 per cent of the existing structure of the 1970s tower. By keeping the core, some existing floor structures, and re-skinning the exterior with more efficient glass, it saved the equivalent of 10,000 flights from Sydney to Melbourne in carbon reduction. They also installed double-decker lifts instead of adding new shafts.

Cameron Dymond, regional property leader with ARUP, said the cost of a new building may be less than refurbishing an existing block, but there was increasing demand from customers and tenants who wanted to work and lease buildings with a low carbon footprint.

Kate Washington, the opposition spokesperson on heritage, said the Berejiklian government loved a bulldozer. She said the historic Windsor Bridge was being demolished despite pleas to re-purpose it for the community. The 200-year-old Royal Oak Hotel in Parramatta has been destroyed and Parramatta’s Willow Grove and Upper Hunter’s Murrurundi Hospital were next.

Nearly 1000 firms, some with hundreds of staff, have signed up to Architects Declare. They include some of Australia's most influential architects including Alec Tzannes, Glenn Murcutt, Peter Stutchbury and Rick Leplastrier.

It feels like we've been working together for 10 years! Chelsea stars say goodbye to Lampard
Bayern Munich have signed former Basel striker Oberlen
Tuchel will sign a contract with Chelsea for 1.5 years (David Ornstein)
Barcelona still owes Liverpool about 29 million euros for the transfer of Coutinho
Immobile on last season: Lazio felt invincible before covid. They could have fought for the scudetto
Chris Sutton: Lampard is another victim of Russian roulette at Chelsea. This is Abramovich's style
Ex-agent Benzema: Karim will return to Lyon, the club is in his heart. He watches all their matches
Source https://www.theage.com.au/national/nsw/disposable-city-shameful-to-bulldoze-buildings-in-climate-emergency-20201127-p56ih5.html?ref=rss&utm_medium=rss&utm_source=rss_feed