New York: President Donald Trump paid no federal income taxes in 10 of the past 15 years, according to a bombshell report in The New York Times.

Trump, who has fiercely guarded his tax filings and is the only president in modern times not to make them public, paid $US750 in taxes to the federal government the year he was elected, 2016, and $US750 again in his first year in office. 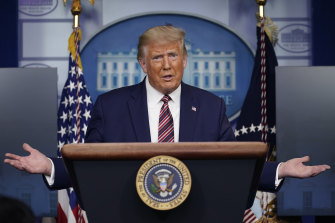 President Donald Trump gestures while speakings during a news conference at the White House, on Sunday, September 27.Credit:AP

Trump was able to minimise his tax bill by reporting heavy losses across his business empire. The Times reported Trump claimed $US47.4 million in losses in 2018, despite claiming income of at least $US434.9 million in a financial disclosure that year.

Speaking at a news conference at the White House, Trump dismissed the report as “fake news” and said he has paid taxes, though he gave no specifics.

The disclosure, which the Times said comes from tax return data it obtained extending over two decades, comes at a pivotal moment ahead of the first presidential debate Tuesday, and weeks before a divisive election.

Garten told the Times that “most, if not all, of the facts appear to be inaccurate”.

Trump has consistently refused to release his taxes, departing from standard practice for presidential candidates, saying they are under audit.

The Times said it had obtained tax-return data covering over two decades for Trump and companies within his business organisation. It did not have information about his personal returns from 2018 or 2019.

The Times also reported Trump is currently embroiled in a decade-long Internal Revenue Service audit over a $US72.9 million tax refund he claimed after declaring large losses. If the IRS rules against him in that audit, he could have to pay over $US100 million ($142 million), according to the newspaper.

Pirlo on Ronaldo's optimal position: Start from the left inside and move to the center. He can play alongside Morata or Dybala
Mikhail Butovsky is probably the best doctor in our sport. A serious conversation about rudeness to doctors, salaries and leaving CSKA and Spartak
Naumov about the defeats of Zenit, Loko and Krasnodar in the RPL after the Champions League: Lack of professionalism in the players and the ability of the coaches
Ronaldo violated the coronavirus Protocol. An investigation is underway. Italian sports Minister on the departure of the player from Turin
Sports Director of Khimki about 2:0 with Rostov: We proved that we are a team and can win on the road
Jaka defeated Arsenal and Leicester did not create anything except the goal. We will try to take points from Manchester United
Pirlo about 1:1 with Verona: Juve do not need a slap in the face to Wake up and play intensely
Source https://www.smh.com.au/world/north-america/donald-trump-paid-just-750-in-income-taxes-in-2016-2017-report-20200928-p55zsz.html?ref=rss&utm_medium=rss&utm_source=rss_feed