During a rare reprieve from tourists, Byron's locals (and semi-locals) rule the roost

Byron Bay is a town transformed. After years of grumbling about being overrun by tourists (there are now lollipop men in summer to manage pedestrian crossings), the coronavirus pandemic has swept away most visitors and left the locals - and semi-locals - to rule the roost.

Beachside barista-to-the-stars Michael Ibrahim - who runs his Soul Kitchen cafe from a 1971 Kombi van outside Raes boutique hotel at Wategos - says the newfound peace and quiet has been a gift and a curse.

"The ones that don't own businesses love it to death because they have the whole town to themselves," he says. "But anyone who owns businesses obviously doesn't enjoy it because we're a tourist town and we make our money out of tourists." 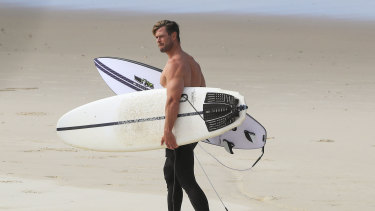 With the crowds absent, the celebrities who have made Byron their home in recent years have stood out. Hollywood heart-throb Chris Hemsworth was photographed dropping his children off at school last week; the week before he was snapped surfing with his younger brother Liam and Liam's model girlfriend Gabriella Brooks.

Just down from Hemsworth's recently-completed mega-mansion is Tim Freedman's sprawling beachside pad Barefoot at Broken Head, usually a wedding venue but in recent months a getaway place for the Whitlams' front man after Byron's buzzing wedding industry shut down overnight.

The Whitlams' Tim Freedman has been staying at his property Barefoot at Broken Head, usually a wedding venue.Credit:Nick Brightman

The Block host Shelley Craft and former winner Elyse Knowles, who live around Byron, have been seen on the beaches in recent weeks, as has Byron newcomer Natalie Bassingthwaighte. The singer moved to Byron from Melbourne earlier this year, just before the worst of the pandemic set in, and has reportedly been renting while her family looks for a permanent home.

Business types from the capital cities have also flocked to holiday homes and beachside rentals during the crisis, because if you're going to be locked down, it might as well be in Byron.

Geoff Morgan, co-founder of recruitment giant Morgan and Banks, describes Byron Bay as his "favourite home away from home", and has been working from Wategos in recent weeks.

So has Brisbane property investor Adam Flaskas, the man behind the Queensland capital's riverside Howard Smith Wharves development. He loves to spend weekends surfing south of the border and has been staying on the waterfront at Wategos. 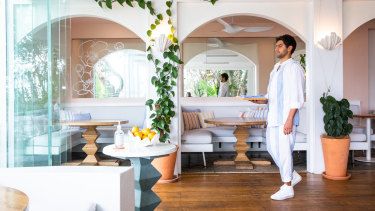 Raes, a regular celebrity hangout, has been closed to the public - but Ibrahim's outdoor coffee cart has become something of a meeting spot, not least because the Byron Shire Council closed the car parks at all the other beaches.

That means it has been just as difficult as ever to nab a parking spot around Wategos' hilly streets.

"There's a reason Wategos is alive and well - it's the best beach in Australia," says Australian Community Media boss Antony Catalano, who bought Raes in 2014. He's not a man inclined to understatement; the fish sandwiches on offer at Raes are also "the best in Australia," he says.

As the Herald previously revealed, Mr Catalano has been running his community newspaper empire from Raes since COVID-19 struck, moving his 15-strong family including nine children into the hotel - until this week, when they moved into a nearby house. 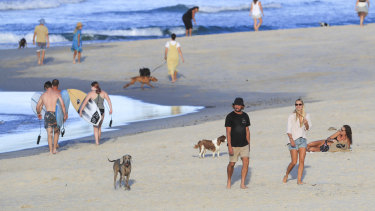 While tourism has been cut off, some visitors who arrived before the pandemic are now stuck in Byron. Scott Lyons, a New York psychologist who was running yoga workshops in the area, was exposed to people who may have had the virus shortly before he was due to fly home in March.

Dr Lyons ended up staying in Australia and has no immediate plans to leave Byron for the US. "It wasn't really a choice but it was the safer of the two," said the trauma specialist, who has been treating his American patients using telehealth.

Dr Lyons said parts of Byron had sprung back to life in recent days. "Shops are open, I was just in the centre of town a couple of days ago. But I don't think the bars are open."

With children now heading back to school, visiting families are leaving their holiday homes and going back to the big smoke. And in one week, the gates reopen on regional travel within NSW, and outsiders can take over Byron once again.

Mr Ibrahim is preparing for a "crazy" July. "Melbourne people don't want to be in Melbourne for their winter," he says. "They usually go to Europe for the summer, but instead they'll be coming here."

Leipzig completely annihilated Mainz
Barcelona are Interested in 18-year-old midfielder Herta Samardzic
Mainz on Werner's hat-trick: Klopp, can you finally take him in?
La Liga can resume on June 11 with a match between Sevilla and Betis
92:48. 6 years since the moment that changed the history of real. Ramos on Atletico's goal in the Champions League final
Arsenal started to fall apart, and I wanted to win. Money is not important. Ashley Cole on the move to Chelsea
The championship conducted 1014 tests for coronavirus and identified two cases of infection. Both are in hull
Source https://www.theage.com.au/national/nsw/during-a-rare-reprieve-from-tourists-byron-s-locals-and-semi-locals-rule-the-roost-20200520-p54ut9.html?ref=rss&utm_medium=rss&utm_source=rss_feed

No footy, no worries: 'Big Freeze' confirmed for Queen's Birthday

Aussies warned to brace for chaos

Victoria went ‘behind Commonwealth’s back’ on China

Morning Report 25 May 20: US sharemarkets closed mixed on Friday

Buyer outbids himself to win auction

UK reviews Huawei decision in the wake of coronavirus pandemic

How to protect against COVID-19

'We just do what we have to do': frontline health workers on COVID-19

The quiet Australian on the brink of an Italian football miracle

‘Flintstones flats’ a page right out of history

Transport security deployed across Sydney ahead of busy peak hours

‘I lost 34kg by intermittent fasting’

Schalke plunge deeper into crisis with loss to lowly Augsburg

WA residents warned to remain indoors ahead of extreme weather

Beijing urges US to drop 'wishful thinking' of changing China

'He acted legally and with integrity': Johnson straps himself to embattled aide Cummings

Explanation for $60b gap only multiplies confusion

The three steps that can take us back to normality

Disadvantaged kids 'fell further in maths, reading due to COVID'

Universal pension for all: Retirees call for tax and income reform

Phoebe and 100,000 kindergarten kids are ready to start school (again)

'Gatherings are not all the same': Conventions lobby for COVID-19 exemption

A star-spangled spanner in the works: how US secrecy controls Australian weapons

Target and superquiz, Monday, May 25

Not so fast: why bullet trains can't revive NSW's regions or relieve the pressure on Sydney

Tricks to get the most out of running, including what the ideal speed is

Treasury: the budget won't ruin us, but will help save us

PM earned praise for swift action, but now voters must wait and see - and judge

From the Archives, 1925: The Scopes 'monkey trial'

Bauer is not the only villain on the scene

Your Daily Horoscope for Monday, May 25

Investa's Cook says the pandemic will define us all

How the University revenue crisis will test its generous super system