Not long after they let Ryan Papenhuyzen slip through their grasp, Wests Tigers turned their attention to the other fullback playing in this year’s grand final.

When Ivan Cleary was coaching the joint-venture outfit, he was acutely aware of Dylan Edwards’ talents from their time together at the foot of the mountains. So when the Tigers needed a long-term fullback replacement for James Tedesco, Cleary went all-in to sign Edwards.

The Tigers put forward a bumper four-year deal with the promise of the No.1 jersey. However, when the Panthers matched the money that was on the table, Edwards opted to stay put.

Ultimately, Edwards and Cleary were reunited when the latter returned to the Panthers, a decision that has them within reach of a premiership if they can extend their unbeaten run to 18 against Melbourne on Sunday.

For Edwards, the path to the decider hasn’t always been a smooth one. He arrived at the club from Dorrigo as a 17-year-old playmaker, a position in which he excelled to the point that Cleary has publicly stated Edwards could have squeezed his son Nathan out of a halves spot.

“I was playing in the halves, at five-eighth,” Edwards recalled. “Obviously there are some good halves here, so I wasn’t going to make it there, was I? The club found another position for me.”

At times, Edwards has struggled to retain it. After a couple of solid seasons at fullback, the 24-year-old was last year dropped to reserve grade. The move came after a diabolical performance against Sunday’s opponents, the Storm, in March.

The former Junior Kangaroo made six handling errors and when his performance didn’t improve the following week, his career was at a crossroads. 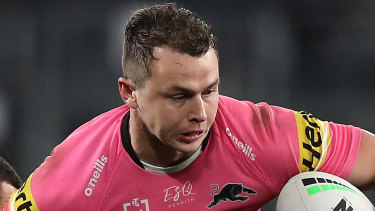 Dylan Edwards is in fine form for the Panthers.Credit:Getty

“I just stripped everything back, went back to what I do well in the game.

“It was just about staying present, staying in the game. Not to dwell on mistakes or too much on the past. Trying not to let one bad moment ruin the next moment.

“I never thought I’d never get back in. If I played good enough footy, I knew I could earn my way back in there. I was fortunate to string together a couple of good games in NSW Cup to get back into the first-grade side.”

Edwards did just that and has retained his place. To show how far he has come, look no further than last week. South Sydney peppered Edwards with a barrage of bombs, from the floating to the spiralling variety, in greasy conditions. Every one of them was safely defused.

“Clez and Burto [Nathan Cleary and Matt Burton] put up bombs every day after training, so I get a fair bit of practice trying to catch those,” he said.

I didn't see the greatness of Maradona at all. But I can't stop thinking about it
Carvajal will miss 4 matches of Real Madrid and plans to return to the Derby with Atletico
Messi always went a lot without the ball. Best of all, this problem was solved Guardiola
Trent on the Premier League calendar: something Needs to change. We do not have time to recover, it leads to injuries
Emir Kusturica: Ronaldo is an ideal, he earned a lot of money, but where is his personality? What can he tell you? Nothing
Maradona is the best dribbler with a phenomenal number of goals and assists. But is it true that he won Serie A alone?
Italian championship. Juventus will play Benevento, Atalanta Miranchuk against Verona, Inter away to Sassuolo
Source https://www.smh.com.au/sport/nrl/dylan-edwards-could-reap-ultimate-reward-after-turning-down-tigers-20201024-p5687h.html?ref=rss&utm_medium=rss&utm_source=rss_feed

He's no Pete Evans, but Mark Humphries is considering a cult

Every picture tells a story of lockdown life in Melbourne

'These actors are going to die': How a Broadway blockbuster came to Sydney

10 things to do in Marvellous Melbourne this week

Best of the week: What to see and do from November 29 to December 5

Live comedy is back – with a few COVID-safe tweaks

Date you’re most likely to be dumped

'Highly speculative' to say COVID did not emerge in China: WHO

The grand house on the hill where Australian art was born, reborn

'Awesome, let’s jump on it': First home purchases on rise in Victoria

Parts of Sydney tip 40 degrees as heatwave descends across NSW

'Not our finest hour': Cate Blanchett on the country's shameful treatment of refugees

Emu Chills Out During Heatwave in Adelaide, South Australia