From heart attack to daily rider: an insider's guide to bike commuting

Four days a week, in just about any weather, Glenn Asquith wheels his bike out the front door at 5.30am, switches on his lights and turns right.

The IT worker rides almost 27 kilometres from his home at Bass Hill to his office near the Queen Victoria Building in the city. It takes roughly 65 minutes - barely quicker than walking to the station and catching the train - but he loves the start to the day. 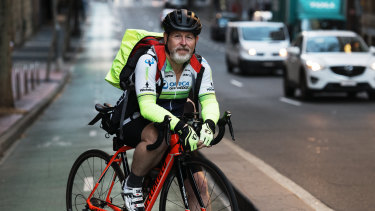 "The simplest pleasure": Glenn Asquith on his way home from the city to Bass Hill. Credit:James Brickwood

"It's the simplest pleasure," he says. "You sit on the seat, turn your legs and steer the bike. You always feel better for it."

There is a health reason why a self-described "car guy", aged 54, takes on such as an excessive commute.

"My family has a history of heart attacks," he says. "Having had my first one at 33, I'm pretty keen to avoid a second one."

Isolation has sparked a boom in bike riding for exercise and, as workers head back to offices amid coronavirus restrictions on the number of passengers using public transport, that is expected to lead to more cycle commuting.

Mr Asquith believes Sydney needs more than just six new pop-up cycleways to encourage riders, including a wider recognition that "everybody matters" on the road and the installation of bike racks on buses and trains to mix up commutes.

Years of riding have taught him a lot about how to get by on Sydney's roads.

For anyone starting out, Mr Asquith suggests cycling to a station and taking the train the rest of the way initially then progressively riding to stations further away. 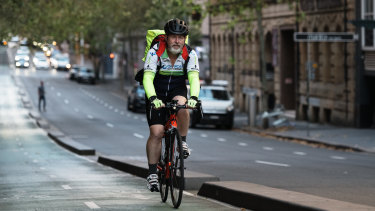 Heading through the city: Glenn Asquith who rides from Bass Hill to near the Queen Victoria building four days a week then home at night. Credit:James Brickwood

If there's a bike path, use it; make sure you're visible while riding; keep the bike's lights on night and day; never wear headphones while riding; and follow the road rules.

"I'm quite vocal at any road user to make sure they're obeying the rules," he says. "You might not like the rules but they're there for a reason."

The president of Australian Cycle Alliance, Ed Hore, says the best advice for new bike commuters is to look for a local cycle group, meet other commuters you might be able to join and study possible routes.

"It's all about finding the best, safest and less physically exhausting route that will be most economical for your time," he says.

As well as making sure bike lights are angled so they don't dazzle other riders, Mr Hore advises new cyclists to be assertive on the road.

"Ride out at least a metre from the gutter so that you're visible to drivers and always indicate when turning so it's clear to them what your intentions are," he says.

Bicycle NSW spokeswoman Bastien Wallace says new cycle commuters should check the detailed advice on its web site about riding in traffic, at night and in wet weather.

It advises riding predictably; giving big vehicles a wide berth because of their blind spots; using a marked bike lane if available; crossing tram tracks at a 90 degree angle; watching for debris on the road; and carrying ID in case of emergency.

Milan and Valencia are Interested in the midfielder of Saint-Etienne Benhalima
Osimhen's agent: only Napoli 100% wants Victor. Newcastle and Tottenham are only Interested
Lewandowski has scored everything in this Bundesliga. This time I put on a show with heels: first I launched a three-piece with Kimmich and Mueller, then I closed it in touch
Chicharito: the Appointment of Moyes to Manchester United is a mistake that still haunts the club
Pallotta refused to sell rum to Friedkin for 475 million euros. Negotiations are unlikely to continue
Flick surpassed Guardiola by winning 22 of the first 25 matches at Bayern. This is the best result since 1965
Flick about the game with fortune: After 5:0, the coach has little work to do
Source https://www.theage.com.au/national/nsw/from-heart-attack-to-daily-rider-an-insider-s-guide-to-bike-commuting-20200519-p54uep.html?ref=rss&utm_medium=rss&utm_source=rss_feed

Cook with Matt and Marion

US astronauts launch into space on SpaceX

Police Use Pepper Spray to Disperse Protesters in Columbus

UK at ‘dangerous moment’ in pandemic

Biden speaks of racial ‘open wound’ in US

Trump lauds agents for protecting him

Retirees call for expansion of the pension

UK coming out of lockdown too quickly: SAGE Committee Member

Holiday just what we need for our mental health after lockdown

Faith: Paradox of the pandemic

'Slap them down' or hear them out: How to handle misinformation 'superspreaders'?

When someone is murdered, what happens to their children?

On the road again: the Seven Wonders of NSW

Him too? Biden's flawed but Trump is worse

Caution and optimism as crises-hit Bright reopens to tourists

He's no Hawke, but he's no Howard either: Morrison's pragmatism may yet be his making

'Leading without inhibition': Inside the Berejiklian government's rush to reopen

How to prepare your dog for your inevitable return to work

The Kardashian-inspired closet where fashion rules over function

Confusion around requirements for restaurants to collect diner details

From working at home to walking the dog: How COVID-19 has changed Australian lives

Superquiz and Target, Sunday, May 31

'If you've got a second, we're getting married now': Thousand wed in NSW despite lockdown

Can race ever be fodder for comedy? It all depends on who you ask

School or sanctuary? The truth behind the 'tiger mother' stereotype

35,000 infections: the cost of a one-week delay in COVID clampdown

Key decisions on borders, bars and restaurants expected on Sunday

Residential areas are no places for these heaters

Ignore the weather, get outside and play

EU urges Trump to rethink cutting funding to WHO

Australia could eliminate COVID-19, but there's a catch

No, less probably isn't more when it comes to AFL

Not-so-sweet dreams: why so many Australians are losing sleep during COVID

'Absolute chaos': Two dead as violence and fury erupts in dozens of US cities

A good, 'balanced' super fund is the best option in current market

My Day on a Plate: Shaun Parker

Watching my grandmother find romance again in her 80s

Your Weekly Horoscope for May 31 - June 7

Pauline Nguyen: 'I was seven when I began working...that was our training, and it made us who we are'

Tracy Grimshaw: 'I get very involved. It's part of my nature'

An expert gave me a new sleep routine to follow. And it works a treat

Tigers claw way back in second half to sink Sharks

'Down and out': Tigers fight back to cap miserable week for Sharks