From Melbourne to New York to London, the ‘nerds who want to make things’

And, of course, their work is the major attraction (alongside the ice rink) at Melbourne’s Rising festival hub The Wilds, where their bulbous, globular inflatable creations glow and skulk amid the food trucks, and screens project their animated imaginations. 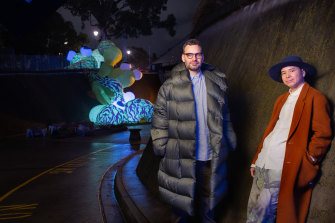 Tin Nguyen and Edward Cutting both began at art school then switched to design. While their creations at the boundaries of art and science, technology and sculpture seem from a science fiction world, they spawn from a love of the real one.

“We’ve had this fascination with the natural world and the world around us generally,” Cutting says. “We’ve grown up looking in rock pools and going on bush walks – for me in the Grampians or down at the Wye River; I’d go to the Grampians every year in September.

“I love zooming in and out – zooming into a rock pool, and there’s all this life in there, and you can zoom out and see millions of years, the ancientness of [the landscape].” 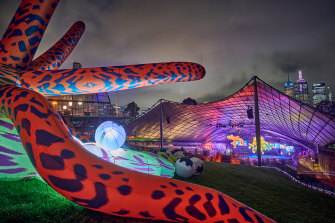 Their home country delivered perspectives like this in spades, Nguyen says.

“It’s very hard to escape the epic vastness of this country,” he explains. “There’s so much more land, so much more nature, and then these human settlements on the perimeters. And I think, growing up, we were both struck with this awe and wonder about everything: insects, sea creatures, fungi. I wanted to be a marine biologist. I think everyone wanted to be a marine biologist at that time.”

Not Cutting, though, who says he was “into physics, and it turned out I was very bad at it”.

Technology, he says, allows them as artists – and their audiences – to perceive and understand things beyond human scale, through microscopes and telescopes, things very, very small or very, very far away. Through 3D scanning and motion capture and computer game engines, they can explore a relationship to nature beyond the limitations of the human eye.

The hybrid creatures at Rising are exactly that, Nguyen says: inspired by many different organisms, some of them microscopic in the real world, “shifting the scale of things to allow people to see the world through a different perspective”.

The pandemic has put a “darker vision” on microorganisms, Nguyen says, but these invisible things make up our body and ecosystem as well as occasionally killing us.

Tin & Ed’s work is not just about playing with scale. Technology, the artists say, can show us ourselves, our behaviours and motivations, in a new light. Cutting recently read a book, Vehicles, by Italian-Austrian cyberneticist Valentino Braitenburg, that used simple vehicle models to try to understand the motivations of simple creatures.

“You can have a very simple system, a simple set of rules, but then you multiply that and you get some very interesting emergent properties out of that.”

Another important element to their work, Nguyen says, is interactivity. They want their viewers to feel a connection to nature.

Life Forces, the recent work at the Rockefeller, used live motion capture to achieve this: “to be able [to] embody spores and pollen and fungi and slime molds, and have an effect on these digital ecosystems”. It brings in an element of play, too, which is important to the pair – both as a way to engage an audience, but also as a place where the artists find inspiration and intuitive freedom.

One of Cutting’s career highlights, he says, was watching commuters and businesspeople suddenly stopped in their tracks by Life Forces.

“They were on a mission to go somewhere and they would suddenly stop and make these weird dance movements as they engaged with the work,” he says. “The accidental encounter is such an important part of our work.”