Border closures and flight cancellations have wreaked havoc with travel plans but they won't stop runners from around the world from getting involved in this year's Sun-Herald City2Surf.

COVID-19 will prevent the City2Surf taking place on its usual route from the CBD to Bondi Beach, but the first ever "virtual" version of the world's largest fun run means you can do it anywhere. 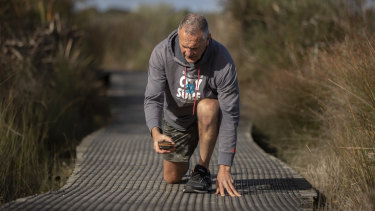 Richard Davies makes an annual pilgrimage to Sydney for the City2Surf - this year he will run the race "virtually", at home.Credit:Christel Yardley

Participants will set their own 14 kilometre course in their town or suburb. For Richard Davies, 63, that means running around mount Maunganui near Tauranga on New Zealand's north island.

"Like Sydney, it's quite a picturesque area here," he says. "I've got a favourite run that I do which is about 9 kilometres, but I can extend that along the water front to get to 14."

Mr Davies is one of 120 overseas runners from 20 countries who have already registered for the virtual City2Surf on October 18. In total, more than 7000 people have signed up for the challenge.

A born and bred Kiwi, Mr Davies came to Sydney 16 years ago to visit his late father's best friend. They told him about the City2Surf and he decided to take part. It has been a yearly pilgrimage ever since, and he's brought about a dozen friends and family with him over the years.

"They all love it - they love the weekend there," he says. "It's an achievable race and you get all sorts of people doing it." 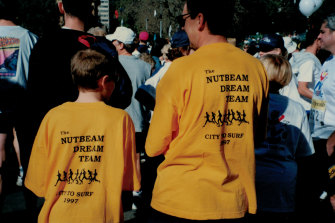 The Nutbeam family's link to the City2Surf goes back to the early 1990s, when they migrated from England to Australia. This year Aimee, 37, her brother Ben, 34 and their father Don, 65, are running the race from Hong Kong, London, and Sydney, respectively.

"Dad's been trying to find things for us to do together remotely, so he signed us all up," Aimee said. Her father has a route in northern Sydney planned, while Aimee is still trying to navigate a path through hilly and humid Hong Kong.

In London, Ben is primed and ready to run. "We've got a really good route mapped out - we're going to start near London Bridge then go past Buckingham Palace, into Hyde Park, then a big loop and back through Whitehall and across the bridge," he says.

Ben and his father first ran the City2Surf together in 1997. "I used to watch dad do it and it was the ultimate man activity, like watching him mow the lawn. I was desperate to get involved."

Their globetrotting father's devotion to the race - even in the face of an imminent international flight - rated a mention in The Sydney Morning Herald in 1993.

"Professor Don Nutbeam, of Sydney University, left his St Ives home on Sunday morning, dropped his luggage with Cathay Pacific at the airport, then went back to the city for the SunHerald City to Surf," an excerpt reads.

"He ran 65:50 (his best time), got into a booked taxi at Bondi at 11.30 and went back to the airport. There he showered (mercifully for his fellow passengers) and left on the 1pm flight to Manila. He faxed his time to his family from Hong Kong."

Professor Nutbeam remembers it well. "When I got to Hong Kong I couldn't walk!" he says.

Entries are open now for the Sun-Herald City2Surf, which will be held on October 18.

Sandro Tonali: Milan on the crest of a wave. The Rossoneri shirt is pressing, but I'm getting in shape
Kadyrov's adviser hit the judge in the groin, and his son was dismissed from Akhmat and banned for three years. At first they all denied
AEK Carrera lost both matches in the Europa League with a total score of 1:5
Stefano Pioli: Milan have not achieved anything yet. The season is long, we will face difficulties
Mourinho 0:1 with Antwerp: the Best team won and the worst team lost
Bale did not make a performance in his first three games for Tottenham. He hasn't scored since January
Father Courtois: Keylor Navas was not a good teammate. When he left for PSG, everything became easier
Source https://www.theage.com.au/national/nsw/from-new-zealand-to-hong-kong-this-year-the-city2surf-goes-global-20200917-p55wif.html?ref=rss&utm_medium=rss&utm_source=rss_national