What's the hardest part of a Shute Shield pre-season?

The fitness sessions? Concocting a coherent team strategy? Chasing up rego money from the bloke who never shouts a beer after a game? 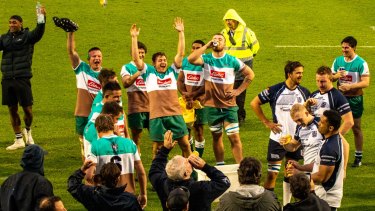 Hunter Wildfires players enjoy a drink after a match against Eastwood.Credit:Serge Gonzalez

In the case of the Hunter Wildfires, one of two returning teams in this year’s Shute Shield, it was getting a group of truck drivers, tradies, accountants, university students and one 40-plus veteran to just talk to one other.

Drawn from rival clubs in Newcastle, the Wildfire recruits had spent years loathing each other.

“There's so much tribalism in Newcastle rugby that the first few weeks [the goal] was just getting them to talk to each other and getting them to mix,” Wildfires coach Scott 'Bubba' Coleman told the Herald before his side’s match against Northern Suburbs on Saturday. “They weren’t allowed to stretch or chat pre-training with guys from their own club. We had to enforce that because they gravitated between their own teams. 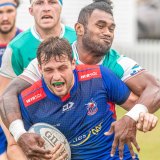 Rob Buaserau, who scored the Wildfires' last try in their 29-29 draw with Manly, wraps up a Marlins player. Credit:Adam MacDonald

“Now we’ve broken that barrier down and there's a lot of good friendships. Everyone has realised that every rugby club is the same and they’re all the same kind of people.”

In the space of a couple of months, the Wildfires have transformed into a genuine team and orchestrated a valiant 29-29 draw with Manly last Saturday to show they belonged.

It is far from the heavy losses some feared would come for the side when they were one of the two teams added to this year's Shute Shield.

Earlier this year, the Sydney Rugby Union was concerned all 11 regular teams wouldn't be able to participate in the Shute Shield once COVID-19 had settled down.

Calls were made to Penrith and the Newcastle and Hunter Rugby Union to gauge whether they’d like to come on board. Both couldn’t say yes quick enough.

As it turned out, all the other teams got their act together, so a 13-team competition was signed off and the four-week race began for the Wildfires to come together before joining Sydney's premier rugby union competition for the first time since 1999.

“It was very rushed, we’re still playing catch-up to be honest,” Coleman said.

In this weekend’s starting XV, only two players live outside the Hunter region.

Mahe Fangupo is the side's 32-year-old halfback and played four Tests for Tonga between 2009 and 2010. He's made trip down from Forbes, in country NSW, for the duration of the competition.

From a wider squad, there is now a core group of players. Hayden Cole, the Western Sydney Two Blues intercept king, moved to Newcastle for work and to play some league. Now he's flying with the Wildfires. 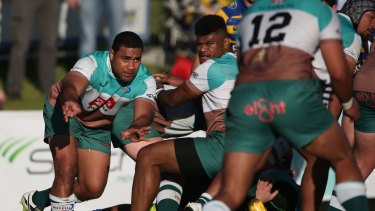 Then there’s 42-year-old truck driver and former Fijian international Sevanaia Rokobaro, who made his first-grade debut for Gordon in 2006 before a short stint with Toulon.

The second-rower had been running around for the Hamilton Hawks and felt his body could still hold up to the rigours of high-level footy.

“He said he'd love to be a part of it, more so just for the training and be a mentor ... but he’s just been that good he’s held his spot,” Coleman said. “I’m sure he’s got niggles and bumps but he does recoveries on Sunday and is a true professional.”

Not everyone is on the Wildfires bandwagon up north. There is debate as to whether the region’s best talent should be playing in Sydney or staying in the local competition, which won't get back under way until next year. 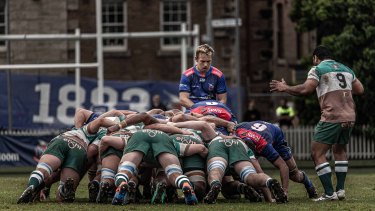 Manly and Hunter pack down for a scrum in their draw last weekend at Manly Oval.Credit:Adam MacDonald

Coleman reckons roughly 10 to 15 Newcastle youngsters pack their bags each year and play for Sydney clubs.

Coleman won’t have a say in the matter but has made a bold call about what the Wildfires could achieve in time.

“I’d love to see Newcastle in the Shute Shield [next year] and, if they had a three-year building time, I honestly think they could get in the top four,” Coleman said. “Our goal was to build the first few weeks. We’ve set ourselves a goal to win a minimum of two or three games this year and be competitive in every other game. We’ve had a few score blowouts at the start but that was guys just getting used to the pace of the game.

“Locals are definitely supportive, especially with that last result. Everyone jumps on something good. There is mixed emotion with us playing the Shute Shield and depleting the local comp. There’s a lot of water under the bridge if it’s to happen next year.”

A seesawing game ended in a thrilling draw at Manly Oval at the weekend and marked the Wildfires’ arrival in a big way.

“Manly made a lot of mistakes ... but we were good enough to put them under a bit of pressure,” Coleman said. “It’s a good reward for our guys for what they’ve put in the last eight weeks.”

A few cold beers on the bus heading back up the M1 is what rugby is all about and, for now, the Wildfires are just happy to be involved.

“It's a good bonding session and there’s a few stories there that probably can’t go in the paper,” Coleman said.

What does Coleman think will happen after a win?

“We’ve got a very tolerant bus driver at the moment who has been really good,” Coleman said. “After a draw was bad enough. God knows what happens if we get a win and god help the bus driver.”

Milan have offered 4 million euros for the striker Bodo-Glimt Gauge. He scored them in the Europa League
Atletico showed a photo of Suarez in three sets of uniforms
Lemar is Interesting to Leipzig
Chelsea midfielder Loftus-cheek is wanted by West ham, Southampton and Aston Villa
Khimki want to sign Mirzov, Djordjevic and Grigalava (RB-Sport)
Barcelona will issue a transfer for desta for 20+5 million euros at the beginning of next week
Nigmatullin about Mandzukic's transfer to Loko: if it had happened 5 years ago, I would have treated it well. They often come to us to finish playing
Source https://www.theage.com.au/sport/rugby-union/from-rivals-to-matching-it-with-the-shute-shield-s-best-how-the-hunter-wildfires-ignited-as-a-team-20200814-p55ls4.html?ref=rss&utm_medium=rss&utm_source=rss_feed