Expert geologists believe the discovery of oil in West Australia, announced yesterday, will lead to the opening up of a large oil field of great commercial value.

The announcement of the find has caused a wave of intense business and scientific excitement throughout the Commonwealth.

The discovery was made at Rough Range, in the desolate Exmouth Gulf country, 700 miles north of Perth, more than a month ago but was not announced until tests could be carried out in America.

First tests at the well produced 20 barrels — or 840 gallons — of high-grade crude oil an hour through a quarter inch pipe. Over the 25-hour test period, more than 20,000 gallons of oil were produced.

The secretary of the Department of National Development (Dr H. G. Raggatt), who first advised exploration of the area, said in Canberra last night that this result was miraculous."

"It would have been remarkable to find half a cup of oil a day," he said.

“It is almost a foregone conclusion that we have found a large-scale field. The sands in which the oil has been found extend over a wide area.”

The strike was announced yesterday at the San Francisco headquarters of the Standard Oil Company of California and confirmed in Sydney by Ampol Petroleum Ltd., the Australian partners in the exploration project.

It began a flurry of activity on the Stock Exchanges of all Australian cities. 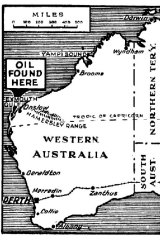 The location of the oil strike. Credit:The Age Archives

AFTER MORE than 50 years of searching, oil has been found in Australia — at Rough Range, a lonely pin-point 700 miles north of Perth, at Exmouth Gulf, the far western corner of West Australia.

The prospects for Australia — if the strike proves part of a big field—are limitless. The discovery of oil could mean as much to 20th century Australians as the introduction of Merino sheep meant to our great-grandparents.

What then is the story of Rough Range No. 1, the wild-cat drill that against all the odds in the oil man's book has been first time lucky, bringing black wealth bubbling nearly 4000 feet to the surface ?

It is a story that goes back to a chance aside in a conversation in Canberra seven years ago.

The managing director of Ampol Petroleum Ltd. (Mr. W. G. Walkley) was discussing the prospects for oil in New Guinea with the head of the Bureau of Mineral Resources (Dr. Raggatt).

"Have you ever thought of investigating the oil potential of West, Australia ?" Dr. Raggatt asked.

Four-man teams of Government geologists had begun the systematic geological mapping of the potential oil areas that had been known for years to lie in West Australia.

"As a potential oil province, I consider the Exmouth Gulf basin one of the most attractive un-tested areas I know in the world," the president of the American Association of Petroleum Geologists (Mr. F. A. Morgan) said in 1947.

The gleaming steel derrick that today towers 142 feet, over the sun and wind dried spinifex at Rough Range is the reality that was born of Mr. Morgan's prophetic words.

THE Rough Range drill site, 20 dusty miles from the war-time United States submarine base and Royal Australian Air Force airstrip of Learmonth, is part of a vast area known as the North-west Basin. Spreading over 45,000 square miles, from the Murchison River to Exmouth Gulf, the basin is greater in size than Tasmania.

It contains a thick section of marine sedimentary rocks of the type that most usually make oil source beds and reservoirs.

Rough Range is only one of several points in the North-west Basin that could contain oil.

Here, since September 7 last, the toothed bit on the drill shaft of the meccano-like oil derrick has been grinding into the earth, chattering and bucking 24 hours a day seven days a week.

Watching over it, tending to the plant and equipment that cost nearly £ 1 million to buy and transport to the site, is a field force of 108 men — Australians and Americans.

Some are men who have searched for, and found, oil in all parts of the world.

Such a one is Mr. C. T. Newcomb, field manager for West Australian Petroleum Ltd., the operating company jointly owned by California Texas and Ampol. 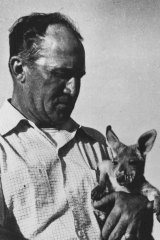 The chief driller at Exmouth Gulf, Mr. A. C. Dysart with a joey. Credit:SMH Archives

Mr. Newcomb, burly, quiet-spoken, has been 42 years in the oil business, working in China, Venezuela, the Philippines, Canada and Indonesia.

THERE is the drill site chief, Al Dysart, tall and sun bronzed, who walks with a limp acquired years past when his leg was smashed in an accident on one of the many oil fields he has worked in America, Arabia and the Persian Gulf.

Since that day last September. when the West Australian Premier (Mr. Hawke) and the Minister for Mines (Mr. Kelly) set the drill shaft spinning, the world has been far away for Al Dysart and the men he controls.

Their life has been centred on the tiny huddle of corrugated iron huts that is their camp, and the drill rig lying barely half a mile away.

Around them the country stretches flat and featureless to the east for hundreds of sun-drenched near-rainless miles, a lonely expanse carpeted with spiky spinifex, salt-bush and stunted scrub.

Coolibahs and swamp gums mark the 'winding course of rivers, canyon-like meanderings of dry-ness that could give new, prolific life to the land if they carried water.

Kangaroos, emus, flocks of goats and a few wandering, scraggy sheep are the only audience of man's activity.

For the men on the drill rig, listening intently to the drill's chatter, interpreting the feel of the brake lever as it "talks" to their sensitive, oil-wise hands, the cloud of dust churned up by a truck speeding from Learmonth airstrip is about all that has broken the scene's monotony.

BUT soon now, tankers may be riding on the waters of Exmouth Gulf — a blue expanse of freshness hardly two miles from the drill site. Exmouth Gulf, a huge stretch of water that made an ideal submarine fueling base, could become the port of a thriving industrial township.

Much of the Rough Range drill rig—800 tons of equipment that can be assembled like a child's toy in a matter of days—was brought ashore from ships in Exmouth Gulf by landing barge.

Vessels drawing up to about 24 feet of water can come as close inshore as a mile and a half, where a depth of between six and seven fathoms is found. This was one of the reasons that made oil men choose Rough Range for the first test drill.

Oil from Rough Range well could be pumped by pipe straight to tankers at anchor in the sight of the men working the drill.

From Exmouth Gulf the oil could be shipped direct to refineries in Australia's cities. Perhaps a refinery might be built on the shores of the Gulf itself. 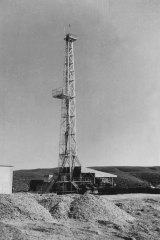 Already several huge refineries are being built in Australia.

Anglo-Iranian is spending £ 40 million at Kwinana, near Fremantle. In Victoria, the Shell company refinery at Geelong, and that of Standard-Vacuum at Altona are on the way to completion.

Three months ago, when the Rough Range drill was set spinning, the imprint of the traditional oil men's smacking good luck kisses still fresh on the drill shaft, the West Australian Premier speculated on what oil could mean to this country.

The prospects, Mr. Hawke said, were limitless. The economy of West Australia alone would be revolutionised.

Oil would bring a new era to the lonely outback and spell undreamed wealth.

For newspaper reporters watching the ceremony —"spudding in" is the oil-man's term—the question, "When will you strike oil ?" seemed tantalisingly unanswerable in September.

FROM the chief geologist of the Bureau of Mineral Resources (Dr. N. Fisher) they got a cautious, technical reply — that the North-west Basin contained all the fundamental structural requirements of an oil field.

Field manager Newcomb was direct and down to earth.

An Ampol man, no oil expert, got closest to the truth.

"If there's oil in Australia," he said. "Bill Walkley will find it."

Atalanta and Sevilla have agreed on the transfer of Gomez. The midfielder will fly to Spain on Tuesday
Laporta on Messi at PSG: I read that they have losses. We need to discuss what deals they can afford
PSG offered Ramos a contract for 45 million euros for 3 years (Onda Cero)
Nacho tested positive for the coronavirus. He was in contact with the patient earlier
Bale scored in the FA Cup for the first time since 2013. He has 4 goals in 13 games at Tottenham
Frank Lampard: I didn't have enough time to take Chelsea to the next level
Ozil will receive 3 million euros in Fenerbahce from July. Lifting - 550 thousand
Source https://www.theage.com.au/national/western-australia/from-the-archives-1953-australia-s-first-commercial-oil-field-20201118-p56fsz.html?ref=rss&utm_medium=rss&utm_source=rss_national