Police speculate that the same person could be responsible for explosions that have destroyed two shops in the historic gold town of Wedderburn in the past two months. 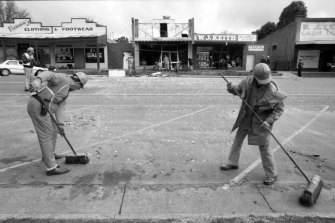 Arson squad detectives, forensic scientists and bomb experts from the police special operations group spent yesterday sifting through the remains of a fish and chip shop that exploded in flames early in the morning.

Police said it was too early to establish any positive link with the bombing of a bakery only two doors down from the fish ship in April.

The explosion happened about 4 am as the owner, Mr Nick Isihos, 41, and his friend Stan, 39, slept in the premises at the rear of the shop. Both were badly shaken but not injured.

The blast sprayed glass and debris across the main street and caused minor structural damage to adjoining buildings in the central Victorian town.

The deputy controller of the State Emergency Service, Mr Barrie Johnson, said the explosion was so loud that most of the town heard it.

The shire secretary, Mr Jeff Walton, said the two explosions had left the town’s 1200 residents fearing they had a “bomber” living in their midst.

Senior Detective Adrian Stone of the Bendigo CIB, said leaking gas was not a likely cause.