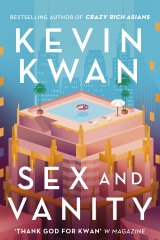 Sex and Vanity by Kevin Kwan.

Kevin Kwan's luridly fun and hedonistic trilogy that began with Crazy Rich Asians became a publishing bravura, with the first in the series also made into a blockbuster movie. This latest novel bears the same blueprint of its predecessors with the title offering an obvious clue as to the contents within. Sex and Vanity is unmitigated soap-opera escapism, and should be considered as such. Those after in-depth psychological insights and dour pronouncements on the human condition are advised to look elsewhere; here, Kwan joyfully skates on the surface, the more glittery the better.

Loosely based on E.M. Forster's 1908 Edwardian period novel A Room with a View (as well as the Merchant Ivory produced film in 1985), Kwan's book moves the action to 2013-18 and sets his melodrama on the jewel-like Italian island of Capri and, later, in New York.

Once again, the Singaporean-born, American-raised author both indulges and satirises the the world of the rich and idle, who are laid out for display like delectable hors d’oeuvres.

At times it feels as if his book is more spectacle full of product placements and designer labels than actual story but there is a thin thread narrative that Kwan borrows from Forster. To wit, his charming heroine – 19-year-old Lucie Tang Churchill, a Eurasian described as having the "blood of Ming emperors flowing through her veins mingling with the blood of New York and British aristocracy" – travels to Capri with her older cousin Charlotte for a destination wedding between a Taiwanese heiress and the son of an Italian count.

On this "island of sybaritic pleasures", she meets the enigmatic George Zao but, despite a frisson between them, things do not go smoothly. Years later, another paramour enters the Instagram-worthy vista and the age-old love triangle story prevails between Lucie and her two beaux.

Like Kwan's earlier books, this one is populated by the titled and moneyed classes, including 'glamazons', bon vivants, art dealers, playboys and society doyennes all swanning around in super yachts, private Boeings and stratospherically expensive high-end property. Sex and Vanity even introduces some new terms such as mocialite (male + socialite) and billennials (billionaires + Millennials). What Kwan does particularly well is revel in the details. To that end, there is a couture costume bachelorette party, puppy yoga classes, wealth psychologists and even an artfully constructed Venetian canal (complete with gondola) flowing inside a living room. Sample dialogue? "By the way, do you have a family tiara?"

Kevin Kwan is a guest at the online Melbourne Writers Festival, August 7-16. mwf.com.au

West ham offered 23+10 million pounds for defender fofan. Saint-Etienne refused
Andy Cole on £ 109m for Sancho: it's crazy money. Manchester United will not spend them at random
Juventus loaned Luca Pellegrini to Genoa
Palace, Brighton and Sheffield want to buy Brewster. Liverpool ask for 25 million pounds
Milan have offered 4 million euros for the striker Bodo-Glimt Gauge. He scored them in the Europa League
Atletico showed a photo of Suarez in three sets of uniforms
Lemar is Interesting to Leipzig
Source https://www.theage.com.au/culture/books/glittering-soap-opera-escapism-in-kevin-kwan-s-latest-20200730-p55h01.html?ref=rss&utm_medium=rss&utm_source=rss_culture