The state's national parks are reporting a surge in visits as people seek out nature to dispel the blues brought on by coronavirus constraints on normal life.

The National Parks and Wildlife Service reports overnight stays at camp-grounds across the state were up by more than a third in July from the same month last year. 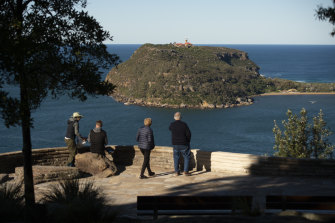 Among sites near Sydney, visitor numbers to the Hermitage foreshore track near Vaucluse on Sydney Harbour more than doubled in the March-June period to 106,479, compared with 43,560 a year earlier, NPWS data shows.

Parks also recorded a similar jump in the number of visitors to Henry Head in the Kamay Botany Bay National park. West Head, at the Ku-Ring-Gai Chase National Park, and Barrenjoey notched up gains of almost 60 per cent for June quarter.

Environment Minister Matt Kean said the uptick in visits was proof nature was "good for the soul".

"While we go through this pandemic, it so important to have areas, close to where people live, where people can exercise and enjoy nature," Mr Kean said. "That is what our national parks provide."

Executive officer of the National Parks Association Gary Dunnett said visiting national parks was a simple way for people to get exercise "but also mental relief from getting out in nature".

However, care was needed to ensure the jump in public usage did not undermine the environmental values the parks were set up to protect.

"We need to be careful we're not loving them to death," Mr Dunnett said, adding that directly people to lesser used walking tracks or even less well-known conservation areas would help.

"The more dispersed we are, the lighter we're going to tread."

Mr Dunnett recommended people also take pointers from the many community groups suggesting new places to explore, such as The Walking Volunteers, or Wildwalks.

A NPWS spokeswoman said the service was "monitoring busy precincts and temporarily limiting access if visitor numbers become high, in order to keep the community safe".

"We understand the importance of spending time in nature, and we encourage visitors to choose lower-visitation parks where possible," she said.

Analysis published this week by the Australian Conservation Foundation found almost half of threatened animal species and a quarter of plant species at risk are found within the nation's 99 largest towns and cities. That proximity offered both access for the public but also perils from urban sprawl.

Zoe Myers, a lecturer in urban design at the University of Western Australia, has said neuroscience is adding to our understanding of how biodiverse nature can improve mental well-being.

"Multi-sensory elements such as bird or frog sounds or wildflower smells have well-documented beneficial effects on mental restoration, calm and creativity," Dr Myers wrote in an article in The Conversation, published in January.

"Other senses – such as our sense of ourselves in space, our balance and equilibrium and temperature – can also contribute to us feeling restored by nature," she wrote.

Sarah Bekessy, a researcher at RMIT's Centre for Urban Research, said access to nature can also be a matter of "ecojustice". Those with backyards or access to national parks are better off than those without.

Still, "we don't realise how lucky we are" compared with many others of the world in terms of the variety of nature close to our major cities, Dr Bekessy said.

Barcelona announced Suarez's move to Atletico
Barcelona will receive 2 million euros for the transfer of Suarez in the seasons when Atletico reaches the 1/4 finals of the Champions League
Chelsea's newcomers came off in the League Cup: Havertz scored a hat-trick (the first of his career), Chilwell an assist, Silva played an hour
Manchester United will lose 139.39 million pounds if the Premier League season is held without spectators - the most in the League
Ruediger - Barcelona's priority transfer target
Arsenal have won 6 matches in a row
Inter midfielder vesino is In talks with Napoli. He was offered to Zenit
Source https://www.theage.com.au/environment/conservation/good-for-the-soul-visits-to-nsw-national-parks-soar-amid-covid-19-20200805-p55iu8.html?ref=rss&utm_medium=rss&utm_source=rss_feed

Virus rules to be eased ‘immediately’

As it happened: Freeman into the final, Takahashi's marathon effort

Why are there unexploded bombs in the Pacific islands?

'Band-Aid's coming off': $250 a fortnight cut from welfare payments

Trump wants to show China the art of making a deal

'They get young people into smoking': Doctors hesitant to prescribe vaping

The surprise moment Fyfe told Dockers rookie he was No.1

'Gangster attitude has to stop', police warn as two charged with murder in Surfers Paradise

Prince Harry urges Americans to 'reject hate' in US election

Coronavirus updates LIVE: More restrictions to be eased in Victoria this weekend as South Australia opens its border to NSW residents

Assange could crochet and play bingo in supermax prison, US prosecutor claims

Emma Stone gets married in secret

How to make a classic chocolate cake for just $2

Give yourself the perfect spring pedicure at home

The most brutal betting story of 2020

Muck-up plans show boys see themselves above the law

'Trying to calm the farm': Coalition in talks to prevent Koala War II

A quarter of workplaces saw productivity improve during COVID-19. The same number saw a drop

Your Daily Horoscope for Thursday, September 24

From the Archives, 1988: Fastest man on earth a drug cheat

Clean sweep in Noosa saves money and the river

The truth about working from home in Queensland

Gympie man who had sex with 13yo in public park jailed

Non-aligned MP to rerun on her ‘can do’ record

Smaller Sydney Festival will go ahead with more local flavour

Meteoric rise is talk of the legal fraternity

Stokes' win on the home front

In a dry landscape, this haunting Drysdale could set a new record

The model was obsolete when the project began

House prices: the sleeper issue that threatens our economy now

There will be no return to a pre-COVID world; it has changed forever

15 minutes to diagnosis: the quick COVID test that could 'change the game'