Stan Grant, the prominent broadcaster and indigenous leader, and a retired Federal Court judge will lead mediation in a race case between Nicky Winmar and three prominent AFL identities on Friday.

Winmar, the St Kilda great, and photographer Wayne Ludbey were outraged by comments made by veteran journalist Mike Sheahan, Sam Newman and Don Scott on their podcast, questioning whether Winmar and his famous jumper-lifting moment in 1993 had been more about the Saints defeating Collingwood at Victoria Park than it was about racism. 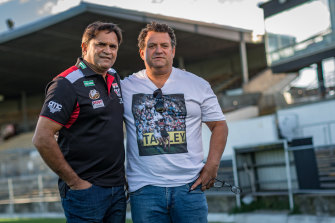 Sheahan apologised and quit the You Cannot Be Serious podcast this week. Winmar and Ludbey are still threatening legal action but will initially head to mediation to be conducted by Grant and Raymond Finkelstein, the retired Federal Court judge who is now a Queen's Counsel. He is also a former acting Solicitor General for the State of Victoria, while in 2012 he conducted what was dubbed the Finkelstein inquiry into Australian media in the wake of the News of the World scandal in England.

Grant is a high-profile broadcaster and columnist and is the vice-chancellor's chair of Australian-Indigenous Belonging at Charles Sturt University.

In a column in The Sydney Morning Herald in February, Grant discussed the role he played in an Adam Goodes documentary which captured the racial issues in the AFL which impacted on the Sydney Swans great, to the point "he was booed and taunted relentlessly until it forced him from the game".

Grant also touched on the Winmar incident and how Newman had made light of it on The Footy Show in 1999 when Winmar, then with the Western Bulldogs, failed to front for a pre-arranged interview.

"There was nothing good when another footballer, Nicky Winmar, 20 years before Adam, was viciously racially abused by spectators and then mocked by television host Sam Newman wearing a black face," Grant wrote.

Grant, filming for the ABC's Four Corners, was unavailable for comment on Thursday.

Winmar and Ludbey are being represented pro-bono by prominent lawyer Leon Zwier from Arnold Bloch Leibler, while Newman, who recently split with Channel Nine after his remarks about George Floyd, Scott, the former Hawthorn captain who was a commentator for Channel Seven at that match in 1993, and Sheahan are being represented by media lawyer Justin Quill, from Macpherson Kelley. 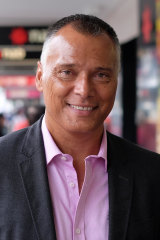 Mediation will be held at Zwier's offices, although the various parties are set to be in different rooms.

Quill and Zwier did not wish to comment but sources close to Winmar said he remains frustrated and disappointed by the remarks made in the podcast.

Those close to Sheahan, Newman and Scott said it's hoped resolution can be reached at mediation without the need to head to court.

Ludbey's photograph of Winmar lifting his guernsey and pointing at his skin – originally published in The Sunday Age – has become one of the iconic images in VFL-AFL history. He and Sheahan reported on the match together for The Sunday Age and later worked together at the Herald Sun, where Sheahan was the long-time chief AFL reporter.

"I'm not as accustomed as you to the fallout and the public scrutiny so it's shaken me a bit. The thing that worried me most is I definitely did hurt some people who I regard as football friends," Sheahan said on his podcast this week.

"Indigenous people, indigenous players, who I have a healthy relationship with, they were hurt and angry. Adam Goodes rang me and was clearly hurt and a little angry about what I've said. Mick O'Loughlin and I spoke.

"I don't like unnecessarily hurting people. I'm speaking for me here. I think I see myself through their eyes as attacking an Aboriginal monument in football. I genuinely feel they were hurt by what I said. This is the forum where we discussed the issue initially and this is the forum where I should say I'm sorry for the pain I've caused you guys."

Coach Of Brentford: We went from a mid-level team to the third team of the season. This is an incredible achievement
Burnley are not going to sell Tarkowski for less than 50 million pounds
Lester wants to rent Trincou at Barca with the obligation of ransom for 50 million pounds
Scott Parker: Fulham have a lot to progress. And I am happy about it
Manchester United are threatening to pull out of negotiations for Sancho if Borussia do not reduce the price from 120 million euros
Cesc about Casillas: You are a mirror to look into
Lone mascots are another symbol of the year
Source https://www.smh.com.au/sport/afl/grant-finkelstein-to-conduct-mediation-in-winmar-race-case-20200702-p558fn.html?ref=rss&utm_medium=rss&utm_source=rss_feed