Richmond coach Damien Hardwick says his attacking spearhead Tom Lynch has found his mojo ahead of the formidable challenge of taking on ladder leader Port Adelaide on Saturday.

Lynch (three) and Jack Riewoldt (four) kicked seven of the Tigers’ 12 goals in the 41-point win over a wayward Brisbane Lions at Metricon Stadium on Tuesday night when Dustin Martin reigned supreme for the defending premiers with another best-on-ground star turn.

Lynch’s aggressive and physical outing on his old home ground especially pleased Hardwick. But the star forward could find himself under scrutiny from the match review officer after an incident involving the Lions' Alex Witherden, who copped a shove to the head from Lynch while he was lying on the ground.

“It’s when he plays his best footy, he’s physical. For a guy that is such a nice person off the field, he’s quite aggressive … I didn’t realise he was that sort of player [when Lynch was first recruited],’’ he said.

"The way he hits the ball, he jumps into contests. He’s got his mojo back. He’s aggressive and that’s the way we like him.’’

It is a big week for the Tigers with clashes against the top two sides on the ladder in the space of four days.

Hardwick said his side was relishing the prospect of facing the Power at Adelaide Oval with his two key forwards finding their feet after a relatively lean start to 2020.

“They’ve been training incredibly well. It was only a matter of time. Harris Andrews is probably the best defender in the land and I thought our guys had a good duel with him and they probably came out on top,’’ Hardwick said.

“Our boys rose to the challenge. They’ve been putting in a hell of a lot of hard work and finally got the outcome they’ve been looking for.’’

Hardwick said overcoming a strong side like Brisbane was an ideal way to prepare for the Power. 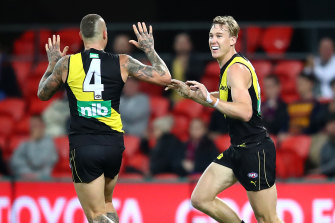 Tom Lynch and Dustin Martin were both in superb form against the Lions.Credit:Getty Images

“We’ve got a formidable challenge over in Adelaide this week. They are sitting on top of the ladder, they play a dynamic brand of footy,’’ he said.

“It’s a challenge we are looking forward to, we can’t wait to get on the plane.

“I thought we came out pretty hard [against Brisbane], they had their chances and I think we left a lot of goals on the table as well … we probably tried to overuse the ball a little bit inside 50 and butchered a few chances.

“The reality is you move on pretty quickly, we play in four days’ time, we’ll bank the points and make the best of our opportunity against Port Adelaide.

Meanwhile, Lions coach Chris Fagan was at a loss to explain his team’s horror night in front of the sticks, highlighting Brisbane’s last two encounters with Richmond have yielded 12 goals and 34 behinds to the Tigers’ tally of 30.14.

“It was frustrating tonight because we got some shots from good spots and for whatever reason we couldn't put them through,’’ he said.

“Now you'll ask me do we practice, and yeah we do practice, we practice a hell of a lot and we've practiced a lot more lately than we have done in recent times, mostly because it's been an issue for us.

"At training we kick quite accurately, and we try and do it when they're fatigued … we follow all the basics of good goalkicking practice.

“It seems to happen against Richmond an awful lot.

“Richmond had the polish. Jack Riewoldt kicks one from the boundary and he's been doing that his whole career … we couldn't kick them from straight in front tonight.

“I know it over-simplifies the game, but it was a really good contest outside of that. I thought our players showed a lot of grit to keep going because that can be deflating.”

Fagan said the Lions could welcome Daniel Rich and Ryan Lester back from hamstring injuries for Saturday night’s clash with the Western Bulldogs while Grant Birchall (rested on Tuesday) and Daniel McStay (suspension) could also return.

The hamstring injury to Cam Rayner is likely to sideline the former No.1 draft pick for two or three weeks.

Sudden humiliation of the best team in Europe: Bayern flew away from Hoffenheim - 1:4. Lost for the first time in 10 months
Fati graced Koeman's Barca debut: he scored a double, earned a penalty - secured the rout
I saw Vardy's second hat-trick against city and made Rhodri mad. And Maddison remembered the doctor who died of cancer
Suarez broke into Atletico: made three goals in 20 minutes (double and assist), admired Simeone and rival Costa
Barcelona's Interest in Isak Increased after Koeman's appointment. Larsson has a high opinion of the player (Mundo Seportivo)
Manuel Pellegrini: When you play against Real Madrid and var, it's too much
PSV and Porto are Interested in Barcelona midfielder PUC. He doesn't want to leave the club
Source https://www.theage.com.au/sport/afl/hardwick-lauds-lynch-s-aggression-but-will-tribunal-trouble-follow-20200805-p55imm.html?ref=rss&utm_medium=rss&utm_source=rss_feed

Lynch ruled out as Tigers look to continue Queensland dominance