Friends of a Sunshine Coast father killed by a shark off Fraser Island on Saturday afternoon have paid tribute to the 36-year-old, as the region reels from one of the first fatal shark attacks in years.

Matthew Tratt was spearfishing in waters off Indian Head, on the island's north-east, when he was grabbed by the leg.

He was given first aid by an off-duty doctor and nurse after making it to the rocky shore at the base of the large headland, while paramedics and a rescue helicopter rushed to the scene just after 2pm.

Fraser Coast deputy mayor Darren Everard, also president of the nearby Hervey Bay Surf Life Saving Club, said it was one of the only attacks he could remember in his 30 years in the region.

"I've spoken to a couple of the locals over there [on the island] who are pretty shook up over it," he said. "We are all thinking of the family, my phone hasn't stopped all morning.”

"I've lived here for 30 years and I can't remember another one like this."

"Our condolences go out to the family of the man who lost his life ... in that brutal shark attack," she told reporters on Sunday morning.

"It's once again a reminder that, especially around that Fraser Island area, it is home to a lot of sharks and great whites."

It remains unclear what species may have been involved in the attack on Saturday, though some media reports have pointed to a great white. 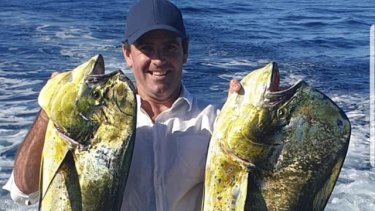 Matthew Tratt was a keen fisherman.Credit:Facebook

Mr Tratt, a Buderim-based airconditioning contractor and keen fisherman, had been out with his brother who managed to pull him from the water after the attack, it was reported.

One friend took to social media with disbelief. "Still can't believe [you're] gone ... you were taken way [too] early," he wrote.

"You always had my back in the water [and] I only wish I could of been there today to have [yours].

"We love and miss you buddy."

"We can't comprehend what you must be going through right now," another friend replied. "Our hearts are hurting for you and the kids so much."

The rescue helicopter's medical team was winched down to Mr Tratt and worked to save him for more than two hours.

But police later confirmed he died shortly after 4.30pm as a result of his injuries. A report will be prepared for the coroner.

Sevilla goalkeeper bunu about the 11-meter shot: he Coached a penalty with Ocampos. He is hitting the same way as Jimenez
Coach Porto conceição can change Conte at the head of Inter
Hans-Dieter flick: I Think Tiago should play in the Premier League. He wants a new challenge
Coutinho can play against Barca. The contract does not specify a ban on his participation in the match
The real life thinking about to return to Zeballos. The decision is up to Zidane
Lopetegui before the semi-final with Manchester United: Let's believe that Sevilla can beat them
Felix about 120 million for a transfer to Atletico: If something doesn't go your way, I don't care
Source https://www.theage.com.au/national/queensland/hearts-are-hurting-friends-pay-tribute-to-fraser-island-shark-victim-20200705-p55934.html?ref=rss&utm_medium=rss&utm_source=rss_feed