It’s one of the markers of our age that every government or company endeavour has to have a marketing slogan.

One piece of drivel spawned by this plague is “Staying apart keeps us together”. It features prominently on a banner behind the Victorian Premier at his daily press conferences. 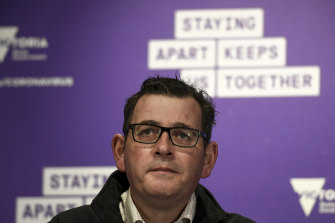 Victorian Premier Daniel Andrews in front of the Staying Apart Keeps us Together slogan. Credit:Penny Stephens

Yet the longer this crisis goes the more obvious it is that the long-term effects of forcing people apart will be to entrench physical, economic, social and ideological barriers that will further ghettoise us.

Like so many things, the shattering of Australia and the world was evident before the plague came and it has pressed fast forward on history.

Apart from the crimes of being both inane and wrong, the deeper irony of the “staying apart” slogan is that its intent is to communicate to a mass audience. And that is proving diabolically difficult.

Once it was reasonable to assume that if your message was plastered across radio, newspapers and the TV bulletins then most Australians would see or hear it. That is no longer true. The audience is self-isolating in its headphones, shattered over myriad platforms, selecting its entertainment from uncountable choices – and often getting no news at all.

Even when you find an audience you can’t be sure how the message will be received. In the era of "fake news" all facts are contested. No conspiracy theory is so wild that it won’t attract followers, and the ability of everyone with a smartphone to be a publisher has been a force multiplier for alternative ideas and views. Some of this is good. Some of it is harmless. And some of it is diabolical and dangerous, like the ability to livestream mass murder or claim that the plague is caused by 5G.

So, on news consumption and facts, we were already successfully staying apart. And, surprise, that’s keeping us apart and making some of us crazy.

Another way we are staying apart is choosing to revert to being colonies on a continent, rather than a federated nation. The border closures have been a useful weapon in containing the spread of the virus. So now what? When do we imagine the caseload in NSW and Victoria will be low enough for the premiers of South Australia, Western Australia and Queensland and the Chief Minister of the Northern Territory to lift restrictions? This won’t be assisted by the fact that the NT is in an election campaign now, Queensland goes to the polls in October and WA in March.

So, as long as the state borders stay closed we will stay apart. And that will prolong the shattering recession that has only just begun.

Australia can also look forward to a long period of staying apart from the rest of the world because no one can say when international borders will reopen. But given there is still a limited amount of travel, and trade continues, every plane and ship that arrives is a threat until there is a vaccine that is available worldwide. So we will stay locked in a half-life existence on our island indefinitely.

Looking more broadly, the world is really doing a good job of staying apart. Keep up this pace of international social distancing and the thing most likely to bring us all back together is World War III.

At home staying apart will have profound effects on our society as the economic and social consequences get baked in.

We are making a choice that one generation will make sacrifices to protect another. Older Australians are being preferred over the young. It was clear at the outset of this crisis that there were no good choices but this one is the worst. The sacrifice the young are making is to be poorer than they otherwise would have been, perhaps for the rest of their lives, to keep the elderly alive for a few more years, or months. If they get this message then a bitter division will arise between generations.

And do we really think that a prolonged period of keeping children apart from a real-world school will be good for them? Or that their education and socialisation will be improved?

What about the human interactions that bind our society, like handshakes and hugging? Will that kind of staying apart improve our lives?

The economic fallout of staying apart has barely begun to be measured. All that we can know from this vantage point is it will be wrenching, the effects will last for decades and have consequences that we can only imagine.

Staying apart divides us. Some of those divisions will be permanent and bad.

So spare us the slogans, we are suffering enough. And if we must clutch at some potted wisdom then there is much more truth in what Benjamin Franklin said to his fellow revolutionaries: "We must, indeed, all hang together or, most assuredly, we will all hang separately."

Dynamo Stavropol about the match with Rotor: Transfers in the Russian Cup are prohibited. The RFU said that there is no way back
Maccabi entered the Champions League without 11 players due to covid. UEFA allows you to play if there are 13 players from the application
Ole Gunnar Solskjaer: De Gea saved us for years, Henderson did the same today. Lingard played well
The semed said goodbye to Barcelona: Thank you for the opportunity to realize the dream. Eternally grateful
Juve have leased Morata from Atletico for 10 million euros with the right to buy out for 45 million
Barcelona and Atletico have agreed a move for Suarez (Fabrizio Romano)
At the 1950 world Cup, Amateurs from the United States beat England. The coach of the Americans compared their players to sheep, and the author of the winning goal went missing
Source https://www.smh.com.au/national/victoria/here-s-an-idea-for-politicians-and-their-staff-stop-the-slogans-20200804-p55ibe.html?ref=rss&utm_medium=rss&utm_source=rss_national

‘If you think something is important, you have to have a go’

Four kids and a lack of sincerity

Ministers Pakula and Neville say Health Department, not their own, was in charge of hotels

Man arrested in Bathurst over alleged overseas importation of firearms

Bolsonaro tells the world: Brazil is victim of 'brutal misinformation'

The end of an error: Brisbane's hellish season and the mountain ahead

'The price was not in the brief': Minister ignorant of $30m paid for airport land

Brave Ducklings Take Leap of Faith Out of Pond in Bendigo, Victoria

LNP has Environmental Defenders Office in its sights

NBN bonuses to executives to be decided by board: Paul Fletcher

When ballet hit the streets: the stories behind stunning tour photos

US Homeland Security and NSW authorities at a home in Bathurst

Wallaby bomb as Qantas flies away

Andrews open to doing a deal on arbitrary detention laws

Facebook takes down fake pages created in China aimed at US, Philippine politics

KFC SuperCoach NRL: Who will win the $50K?

‘Not before time’: PM’s swipe at Premier

More restrictions to be eased as cases plummet

Can luxury fashion ever regain its lustre?

Falling cases to accelerate Melbourne's road back from restrictions

Name ‘as jarring as the C-word’ dropped

Later NBA season may rule stars out of Tokyo Olympics

‘Mega backflip’ that will cost billions

Naked City podcast: The death of a neo-Nazi crime boss

Next generation charging: why you'll want a GaN power brick

Virus ‘under control’ in Qld as ADF leave

How 2000 Olympics changed how we live

Kathmandu hopes for recovery after COVID hits its sales

'There's a kid out there': Locals puzzled as police bar them from hunt

'We've got the votes': Republicans push to fill Ginsburg vacancy before election

Eddie’s excuse as good as it gets

ASX bounces back after overnight tech rally; All sectors ahead

'I hope you like it': Woman suspected of sending ricin to Trump to appear in court

The $300 pay cut for JobSeekers

Zempilas warned over unauthorised use of media platforms for electioneering

Rebooting your romance is more important than you think, especially now

As it happened: Bulgarians bounced as Aussies set up golden chance

FEARS OVER ‘SILENT WAVE’: The hidden pandemic behind COVID

10 David Jones stores could be closed