Queensland women’s charity the Lady Musgrave Trust is launching an information pack to help older women avoid homelessness if they have a sudden change of circumstance such as a divorce or a death in the family.

Di was an educated professional with a teaching job, two children, a husband, a family home that was almost paid off, and a second investment property. 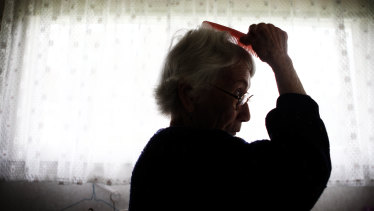 In the space of just a few months, she was technically homeless after her marriage of 43 years imploded.

Di [who did not want her full name published to protect her children] had been teaching in China for almost two years when she says she started getting "strange letters" from her bank in 2010.

Leaving her position to return home, she discovered her husband had drunk and gambled away their life savings, including equity in the two houses they owned, which were repossessed.

Di, then 66, found that despite her qualifications, her age made her unattractive to employers and she couldn’t secure work after leaving her husband.

"I was just completely stunned, completely overwhelmed by what had happened," said Di, who is now in her 70s.

"I’ve got two degrees, I was a registered nurse. I’m not an idiot and I’m not a criminal, but I couldn’t get regular work."

During the following decade, she was homeless, living in her car and, in the early years, sometimes house-sitting.

"I was staying in these very nice houses, some of them were million-dollar properties, but I was actually homeless," she said.

"I didn’t even qualify for social housing to start with because apparently I had too much money to qualify."

It wasn't until March this year, that Di was finally approved for social housing.

Lady Musgrave Trust chief executive Karen Lyon Reid said the COVID-19 pandemic had put extra stress on older women struggling financially, with fears it may be the final straw for some.

"We all know someone in the 55-and-over age bracket that’s tipping right on the edge of homelessness," Ms Reid said. "And all it takes is that final tiny push and suddenly you’re over that cliff."

The charity held its 12th Annual Forum for Women and Homelessness this week, using the occasion to officially launch a new guide for women over 55 to avoid ending up in a situation like the one in which Di found herself.

The guide – a physical booklet that's also available online – is designed to give older women useful advice to prevent them from falling over the homelessness cliff.

"Women in this age bracket may not have worked a lot in their life, they were often a stay-at-home mum, or if they worked, it was intermittent," Ms Reid said.

"They also often have left financial things to their partners to manage, so if there’s a divorce or a sudden death, these women are stuck – they don’t know what they’ve got and they can be surprised by what they don’t have."

Di said she was happy the trust was moving from focusing on younger homeless women to actively helping older women avoid homelessness.

"Everyone’s story is different, but I feel that older women have it worse because they have often been cruelly mistreated," she said.

"There is often nowhere to go. Maybe with this new booklet, it will make a difference."

It's time to learn the names of new Borussia heroes. Now there are 17-year-old boys making goals
Paulo Fonseca: it's Important to bring Smalling back to Roma. We have only 3 Central defenders
Arteta about 2:1 with West ham: Arsenal made life difficult for themselves with losses, but they fought and believed in victory
Palace midfielder Townsend: Could have beaten Manchester United with a bigger difference. We had moments
Philippe Coutinho: I am motivated and I want to work hard to make everything work out well on the pitch
Torres on Chelsea: I Thought I could remain a top player, but I was unstable. Although there were enough successes
Neville on the broken penalty against Manchester United: an Absolute disgrace
Source https://www.smh.com.au/national/queensland/how-an-educated-married-brisbane-mother-became-homeless-at-66-20200805-p55iwa.html?ref=rss&utm_medium=rss&utm_source=rss_feed