Victorian Labor backbencher Mark Gepp has written to his caucus colleagues demanding answers about the lockdown of high-rise towers in Flemington and North Melbourne, saying he had found the police presence outside the towers "difficult to watch".

It comes as authorities closely monitor the rising number of cases in public housing towers across Melbourne, with 242 cases now identified across the towers locked down last week and 32 cases at towers in Carlton. 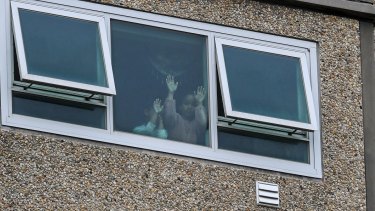 Public housing towers in Flemington and North Melbourne were locked down for five days. that have been locked down due to Coronavirus. Residents stuck in their flats.Credit:Justin McManus

As a young boy Mr Gepp lived with his family in a flat at 65 Holland Court, a mid-rise apartment block next door to one of the towers subjected to hard lockdown last week.

More than 3000 people in nine towers across Flemington and North Melbourne were locked in their homes without warning on the afternoon of July 4 as authorities moved to contain the spread of the deadly virus within vulnerable communities.

At the time, there were 23 identified cases across the nine towers.

Housing Minister Richard Wynne is monitoring the 32 cases identified across various sites in Carlton, but has been told there is currently no evidence to suggest the Carlton outbreak carries the same risks as the Flemington and North Melbourne estates.

Over the weekend, the state government set up pop-up sites for voluntary testing at public housing estates across the city.

As a young boy, state Labor MP Mark Gepp lived in a mid-rise tower in Flemington, next door to the towers subjected to hard lockdown last week.Credit:Mark Gepp

In an email sent to every upper and lower house Labor MP on Friday, Mr Gepp said he had watched the footage of police and flashing lights outside his former home and imagined himself as a child being "bewildered" and "scared".

"We all know that decisions to detain citizens in their homes without warning by a government is as serious as it gets," he wrote.

"Is this the new COVID-19 model, are we stationing armed law enforcement outside the homes of those with, or suspected of having, the virus?

"How was it that we kept a mother and her newborn apart," he asked in his letter, in an apparent reference to a woman who was unable to provide expressed breast milk for her premature baby in hospital during the lockdown. "What was the process and who made the decision to detain people in their homes with armed law enforcement?

"Why is everyone else given 48 hours notice of a lockdown but the people of the public housing estates were not?"

Mr Wynne said the health and safety of public housing tenants had always been the government's main priority.

"We’ve followed the advice of the health experts throughout this pandemic and this decision was no different – it was incredibly hard to have to take the course of action we did, but the alternative of seeing the virus spread further and endanger the lives of so many, was simply not acceptable."

Mr Khalil, who grew up in social housing in the 1970s, said it was "upsetting" and "concerning" that some of the most socio-economically disadvantaged and vulnerable people in Melbourne had faced harsher restrictions than all other residents.

"People living in these nine towers are now subject to another layer of disadvantage based on their residence being high-density housing," he said on Tuesday.

"This lockdown also raises the question about what, if anything, are state and local governments doing to prevent a similar situation across other Victorian public housing estates?"

Mr Gepp said had never forgotten where he came from, and the sight of the lockdowns had "taken [him] back there with a stark clarity".

"I understand that some of these questions inevitably will be uncomfortable, but they must be asked and answered nonetheless," he said.

"Personally, I need to ask these questions because at some point I want to go back in my mind and sit with myself as a little boy and have the answers.

"I think every child in the public housing estates today who has just endured and is still enduring lockdown also needs to know."

Messi made 54 runs in the Champions League. This is 21 more than Kovacic, who is second
Spain, Germany and France have two clubs in the 1/4 final of the Champions League, England and Italy have one each
In the last three meetings of Barca and Bayern in the playoffs, the future winner of the Champions League passes on
Chelsea conceded 7 goals for the first time in two matches of the play-off series in European competitions
Buffon-Pirlo: Now I have to call you mister!? Good Luck, Andrea
Insigne is the first Italian to score for real at the Bernabeu and Barca at the camp Nou
All 11 Barca players touched the ball before Messi's goal against Napoli
Source https://www.smh.com.au/politics/victoria/how-did-we-keep-a-mother-and-newborn-apart-mp-s-missive-over-towers-20200713-p55bkm.html?ref=rss&utm_medium=rss&utm_source=rss_feed