I can’t prove it, but I’m sure my school’s public relations manager knew my ATAR score before I did. He called the night before results and asked if I could come in the next morning for a media photo shoot with a group of other students. Cringe-worthy as it seems now, it didn’t occur to me to say no. I was used to being told what to do. At the end of the call, he asked me to guess my score. 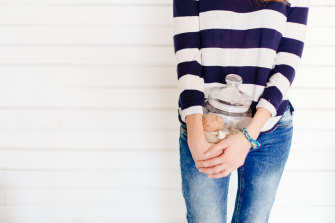 “There was a second, deeper fear: that I had no idea what I wanted to do – and that no one was going to tell me.”Credit:Stocksy

“Come on, you have to have some idea. Even a range.”

“OK. Sure.” He sounded disappointed.

We both knew I had lied to him. I was a high achiever at a school of high achievers – more than half our class ended up in the top 10 per cent of the state – and, to be honest, I would have felt like I’d failed if I wasn’t in the top 5 per cent. Despite the attempts by our teachers to encourage us to follow our interests, my peers and I built our school lives around that final number – even those of us who weren’t taking maths could instantly calculate how a subject’s weighting could affect a final score.

Underneath the terror of that final number, there was a second, deeper fear. It gripped me while I wandered around university open days, eyes glazed, taking every single brochure; or when I sat in the careers counsellor’s office, comparing my subject choices to course prerequisites. The fear that I had no idea what I wanted to do – and that no one was going to tell me.

I pushed that fear down. Surely, if I aced my subjects, it wouldn’t matter. By then, I would know.
The morning after that call, I got my number. It was high. High as I’d hoped. For one glorious moment, I collapsed on my bedroom floor in relief. But through everything that followed – the photo shoot, changing my university preferences, changing them back again, the long listless summer where I read novels and ate bags of chips every day – that larger fear remained.

I picked a humanities course, but I felt the subjects had to be “useful”: international politics, economics, anything in the Law buildings.

So here’s where I ended up, after that impossibly high score: doing subjects I hated, turning up 40 minutes late to tutorials because I struggled to create routine without the structure of school, wandering the beautiful grounds of the university alone because I didn’t know how to make friends in a course of thousands instead of classes of 25.

I let deadlines slide and handed in assignments late. I failed a subject, for the first time in my life.
I had a near-perfect score. But that wasn’t what I needed.

Here are the important moments I’d missed: the times I’d stay up until 3am, reading. How I’d turn to a book of Greek myths I’d borrowed from my grandmother, when I wanted to be swept up in stories older and larger than I was. The bottle of sand from the beach my family went to each summer, which I kept as a reminder of where I felt truly myself. The people I met – outside of uni – who could make me laugh no matter how bad the day had been. The moment I procrastinated finishing an assignment by writing the first line of a novel.

That novel became my debut, published last year. The bottle of sand became a fictional island, and the book of myths a dictionary of fabled sea creatures, both of which are in my second book. I married one of those friends, and am still close to the others.

Because I knew all along what I wanted to do. I just had to take my eyes off the ATAR to let myself see it.

I wrote my book Before the Beginning to play out my biggest fears of this time at the end of school: what if I failed one of those all-encompassing exams? What if my friendship group fell apart, or the faith and world view I’d relied on began to unravel? I wanted to offer my characters a way through the impossible pressure so often placed on young people of this age – to give them the resilience I had needed.

So, I pushed them harder than I had been pushed, left them alone on an island for a week, with their futures falling to pieces, and I saw what they did next.

I am filled with awe when I think of the current year 12s, and the resilience they have shown. I hope that, in this time when we have all slowed down, these young people have seen those moments I missed. The friendships that have drawn tighter through distance. The hobbies that have kept them going through quarantine. The music they’ve made in their bedrooms.

I hope they notice these moments faster than I did, and know that listening to them is all they need to do to find their way to the future – whatever their ATAR.

Before the Beginning (Hachette Australia) by Anna Morgan is out now.

This article appears in Sunday Life magazine within the Sun-Herald and the Sunday Age on sale November 29. To read more from Sunday Life, visit The Sydney Morning Herald and The Age.

Get a little more outta life

Start your week with practical tips and expert advice to help you make the most of your personal health, relationships, fitness and nutrition. Sign up to our Live Well newsletter sent every Monday, here for The Sydney Morning Herald, here for The Age, here for Brisbane Times and here for WAtoday.

Mueller congratulated Brady, who reached his 10th Super Bowl at the age of 43: You are a hero and an inspiration!
Neville compared Liverpool to Coventry after Manchester United's win. Probably because of the color of the uniform
Vladimir Gazzaev held the first training session with Siena
Alessandro Costacurta: Inter are the favourites for both the Milan derby and the Scudetto
The Valencia player tested positive for antigens. Yesterday was a match with Atletico
Tottenham topped the rating of the most eco-friendly clubs in the Premier League. Manchester United, Arsenal, Brighton and Man City-in the top 5, Liverpool-7th
Manchester United and Liverpool put on a show in the cup. The sponsor of the entertainment is the bold positions of Trent and Rashford (United have better realized this advantage)
Source https://www.theage.com.au/lifestyle/life-and-relationships/i-had-a-near-perfect-year-12-score-but-that-wasn-t-what-i-needed-20201126-p56i6w.html?ref=rss&utm_medium=rss&utm_source=rss_feed