An emotional Queensland coach Kevin Walters says he "wouldn't want anyone else in charge" than Greg Inglis as the Maroons look to begin a new era in Wednesday's State of Origin opener in Melbourne.

Walters at one stage looked like he was fighting back tears as he passionately backed new skipper Inglis to step up in the absence of retired greats, ex- captain Cameron Smith, Cooper Cronk and Johnathan Thurston. 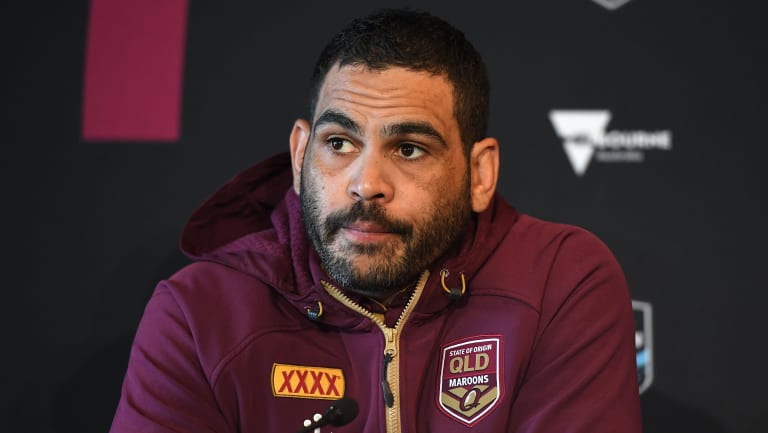 Leading from the front: Greg Inglis.

And that was before veteran fullback Billy Slater was added to that list after making a shock withdrawal on Monday due to a hamstring injury.

The Maroons were already without 151 Origin games' worth of experience after the Big Three's representative retirement and selectors overlooked veterans Matt Scott and Darius Boyd for game one.

After Slater's stunning withdrawal, Inglis, 31, is now the sole remaining survivor of Queensland's 2006 team that began their dominant run of 11 series wins in the last 12 years.

"I wouldn't want anyone else in charge of this team than Greg right now for the situation we have found ourselves in," Walters said.

"Greg does a lot with his actions and we will see that on Wednesday night."

Walters reckoned naming Inglis - a veteran of 30 Origins - as captain was a no- brainer.

'I see the respect he has from the playing group.

"He will lead from the front and if he does that, I will be very comfortable sitting in the (coach's) box."

Inglis was humbled to be making his debut as Maroons captain at Melbourne - where he began his glittering career in 2005 with NRL club the Storm as a teenager.

"It's a tremendous opportunity for myself. I started my career down here, I moved down here when I was 16," Inglis said.

"Now to be back here playing on the MCG and to lead the Queensland Maroons out as captain, it is ironic.

"It's a big occasion for myself but I will put the team first."

After missing the 2017 series with a knee injury, Inglis had been named to burst back onto the Origin scene in the centres.

However, the veteran may slot into fullback for the injured Slater.

Walters is yet to confirm his backline after bringing Brisbane's Anthony Milford and Newcastle's Kalyn Ponga into Melbourne as potential replacements.

Either way, Inglis ominously warned he planned to make his presence felt at the MCG.

"I know people are saying they are big shoes to fill (as captain) and they are - Cam Smith will go down as one of the great leaders of all time in Australian sport," Inglis said.

"But I am going to be myself and be the leader I am. That is why Kevvie chose me - I will lead from the front."

Atalanta extended the winning streak to 11 matches, beating Sampdoria-2:0
Milner played his 536th game in the Premier League and was ranked in the top 5 of the League in games played
Barca midfielder Fati is removed in the Derby with Espanyol. He spent 5 minutes on the field
Suarez scored 195 goals for Barcelona and finished third in the club's top scorer list
Daniele de Rossi: People call Messi cowardly, but they are afraid to ask their wives for a remote control from the TV
Daniele de Rossi: Ronaldo is comparable to Messi in goals and trophies, but Leo's game is more fun
Pep about 5:0 with Newcastle: Manchester City tries to score more goals out of respect for the tournament and the opponent
Source https://www.theage.com.au/sport/nrl/inglis-the-man-for-new-queensland-era-walters-20180605-p4zjh5.html?utm_medium=rss&utm_source=rss_feed

Lighting up your life

National cabinet to decide on hotel quarantine, cuts to flights

'Just get tested': Fears lung cancer is flying under radar amid COVID-19

Australia should switch course and try to eliminate COVID-19

Your Daily Horoscope for Thursday, July 9

From the Archives, 1971: Smiles for Aboriginal protest walkers

Uncaring few create pain and misery for many

The simple ritual of putting on shoes during turbulent times

After tribunal rejection, ACTU doubles down on paid pandemic leave for all

Sing a song of waterside luxury

How to win travel package worth thousands

Own a slice of Sydney maritime history

Suburb’s planned evolution into a ‘centrepiece’ for region

End of legal dog-fight looms over the Horizon

CBD Melbourne: Kearney and Coker jump to the Left

End of legal dogfight looms over the Horizon

Why are masks not yet mandatory in Australia?

Don't pussyfoot around, the messages need to be stark

’Can’t do that’: Clumsy cricket handshake

We won a postcode lottery that we'd never wanted to enter

Businesses have backs to the wall as steel trap locks city

Cousin charged after 10yo found mutilated

‘Sympathy and accountability must start’ amid COVID-19 lockdowns