He is one of the most in-demand musicians and would be selling out stadiums and arenas around the world if it wasn't for the COVID-19 pandemic, but Kevin Parker, the man behind psychedelic rock outfit Tame Impala, is quietly eyeing a more low-key return to the stage.

The Australian performer says he is eager to play smaller venues over summer ahead of a bigger tour of his best-selling album The Slow Rush, which has been postponed until the end of next year. 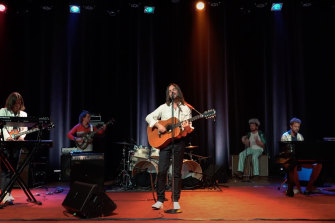 "I miss those smaller shows, those sweaty, intimate shows – it’s a vibe that can’t be replaced," Parker, 34, says.

"It’s not the same in an arena or a stadium. This year has been all about having a good excuse to do something you wouldn’t normally do so if it’s an excuse to do some smaller shows, I would love that."

Contrary to his album's name, Parker experienced more than a slow rush this week. On Wednesday, he woke to news of two Grammy award nominations - for best rock song for his track Lost In Yesterday and for best rock album.

By the end of the night he was the reigning king of the ARIAs, claiming five awards from his seven nominations, including album of the year, best rock album, producer of the year and engineer of the year.

But it was the win for best group that raised eyebrows. While Parker plays with a band when touring, he writes, records, produces and engineers his albums alone. He understands why people might be confused.

"The music sounds like a band, which I guess has always been the source of confusion for people," Parker says. "For all intents and purposes, I am a solo artist - I make music in my studio by myself and I bring it to the world."

Parker also shoulders some of the blame for the confusion. When he signed his first record deal he failed to mention that Tame Impala was a pseudonym for his work as a solo artist. 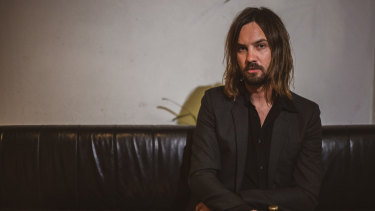 "I was too shy to tell them the truth," he said. "I was too self conscious about being a solo artist."

Now, with a total of four Grammy nominations, a Brit award and 13 ARIA awards lining his trophy cabinet, Parker feels a little more secure in owning his success.

"I am extremely fortunate that I have found my confidence and I can stand behind my music myself and say I made this," he says.

And while some artists seek to move abroad to further their success, Parker says he is happy to keep working from his home in Fremantle in Western Australia.

"There's a thing of artists always wanting bigger and better things and feeling like you need to go to these massive music or entertainment hubs like LA or New York, but for me I have everything I need where I am."

The Slow Rush is available now through Island Records, Tame Impala's 2020 tour dates have been rescheduled to December 2021. More information is available at official.tameimpala.com

Juventus, Inter and Tottenham spoke with Di Maria. The midfielder wants to stay at PSG for another 2 years
Plowman was headed by Siena. Vladimir Gazzaev has bureaucratic difficulties, but he has already been introduced to the team
Thomas Tuchel: I couldn't miss the chance to work at Chelsea, in the strongest league in the world
Tuchel devoted a lot of time to tactics and talked to all the Chelsea players at the first training session
Ibrahimovic after clash with Lukaku: In the world of Zlatan, there is no place for racism
Milan defender Musacchio has passed a medical in Lazio
Arsenal is a big club in England. Ødegård fit into the role of the tens of Arteta. Holand on Martin
Source https://www.theage.com.au/culture/music/is-tame-impala-a-group-kevin-parker-explains-20201126-p56ibt.html?ref=rss&utm_medium=rss&utm_source=rss_feed

Psychological horror comes with a two-sided twist in The Medium

We must change to battle climate change

‘I could have paid a mortgage’: Private school education costs revealed

Your Daily Horoscope for Thursday, January 28

Sun, salt and breeze: a defence of the Freshwater ferry fleet

From the Archives, 1971: Henry Ford II jets into Sydney

Here’s the rub on the COVID jab: it’s no economic magic bullet

A plea for the kids returning to our hottest schools

Lessons from 2020 can make school equal for all

Why Queensland is seeing a sudden spate of positive wastewater tests

Inland Rail will be ‘devastating’ for southside Brisbane, inquiry told

The obliteration of all who inhabit our planet

Albanese drops Butler from climate in reshuffle restart on emissions

No firepower as fierce as a frown from a frightening female

Seven Londoners Fined After Gathering to ‘Watch TV and Eat’

D-Day for players from Queensland clubs and All Stars involvement

NRL sweats on Queensland decision for All Stars clash

Secret signs your partner is lying

‘Things have changed’: Some restrictions eased as NSW strikes balance

Miss ready to power back into form on Scone return

Australian men extradited to US over $65m mobile phone scam

Virus victim’s relative wants to meet WHO experts in Wuhan

Got a job for me? Phone call that reunited Benji and Bennett at Souths

Tips and race-by-race preview for Scone on Thursday

Shame on companies that use JobKeeper subsidy to pay executive bonuses

Teams and tips: AFLW to kick off with a bang

Economic profiteering is fueling the war in Yemen: UN panel

‘Disconnect between words and actions’: Australia responds to Xi