Some private elective surgery patients are being urged to delay procedures for up to a year and aspiring parents may have to push back plans to conceive with IVF as the state government hits pause on non-urgent procedures in a bid to free up hospital capacity for coronavirus patients. 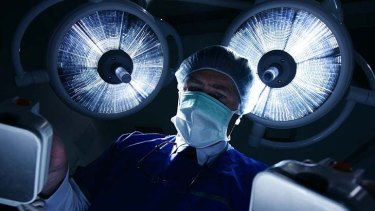 Public hospitals will drop their elective surgery capacity to 50 per cent of normal operations to free up space, while private hospitals will pull back to 75 per cent.Credit:Nic Walker

There are now at least 2128 active COVID-19 cases in Victoria, with the number of people in hospital rising by four to 109 over the last 24 hours. Twenty-nine people remain in intensive care.

Professor Paul Myles, director of The Alfred hospital's anaesthesiology and perioperative medicine department, who is leading a taskforce screening Australian surgery patients for coronavirus, said growing global evidence suggested those infected with COVID-19 were at heightened risk of dying post-operatively.

A major global study of more than 1000 elective surgery patients (including those who underwent minor procedures) across 24 countries between January 1 and March 31 found the death rate for patients with COVID-19was almost 19 per cent.

"There might be some patients who are better off delaying their surgery for three or six or even 12 months if it is safe to do so," Professor Myles said.

"Although they might have an uncomfortable condition or a troublesome one, their own anxiety and also the risk of COVID-19 if they had the surgery might be so much greater that it is just safer and better for them to wait."

Professor Myles cautioned, however, that for some people there was no opportunity to delay surgery and urged patients to have conversations with their doctors about their medical treatment.

"It’s complex and it’s incredibly challenging," Professor Myles said. "The other side of all this is that we don't want people who really should be coming into hospital and having surgery missing out. That includes people with heart disease or those need cancer screening. Those people still to be having their tests and if they need to have surgery they should be having it earlier rather than later."

Category three surgeries include hysterectomies along with hip and knee replacements. Category one and two surgeries cover more urgent and life-saving procedures.

Public hospitals will drop their elective surgery capacity to 50 per cent of normal operations in order to free up space, while private hospitals will reduce capacity to 75 per cent, Ms Mikakos said. Urgent and life-threatening surgeries will still continue.

Fertility Society of Australia President Luk Rombauts said IVF cycles that had already started would likely be allowed to continue, but it was anticipated there will be delays for some women who had not started their treatment yet.

The priority for IVF specialists would be to prioritise treatment for high-need women who may not be able to conceive if they are forced to wait another six to 12 months.

"We are looking through the implications of it all as we speak," Professor Rombauts said.

"But it will probably mean, again, unfortunately, we will have to prioritise high-risk patients. No implementation date has been given in the announcement so for now it's business as usual."

Public hospitals were due to return to 100 per cent of normal activity by the end of the month, but these plans were shelved on Thursday as Victoria recorded its largest number of new cases for a single day since the pandemic began.

The cancellation of elective surgeries comes as calls mount for a national database for reporting health worker infections in real time following a spate of coronavirus clusters which have spread through major Melbourne hospitals and aged care homes infecting staff, patients and elderly residents.

The clusters have fuelled fears of widespread staffing shortages, with hundreds of healthcare workers across the city still in quarantine after being exposed to or contracting coronavirus.

More than 14,000 doctors and other healthcare workers have signed up to relieve overstretched hospitals battling coronavirus outbreaks.

An article published in the Medical Journal of Australia this week by a group of leading infectious disease experts called for the urgent establishment of a national database reporting health worker infections in real time to halt the undetected spread of the virus in hospitals.

It is a concept strongly supported by Professor Myles and Australian Medical Association President Julian Rait who said more transparency was needed around infections among healthcare workers.

"We think that is critical to understand how healthcare worker infections are required and spread," Associate Professor Rait said.

Ms Mikakos said there also more than 1000 ICU and critical care beds in hospitals across Victoria with the capacity to quickly double this to 2000 beds.

Ms Mikakos also announced the $30 million project to recommission 84 beds at the former Peter MacCallum Cancer Centre in East Melbourne had been completed. The centre, dubbed St Vincent's on the Park, will be overseen by St Vincent's Hospital.

Intensive care capacity has also been expanded at the Casey Hospital , Baxter House in Geelong, Bendigo Hospital and Shepparton Hospital, she said.

Lothar Matteus: Bayern need to make a lot of mistakes to lose to the current Barca
Pedro said goodbye to Chelsea: it Was an honor to play for the club and be a member of a big family
Tammy Abraham: Lewandowski is the best striker in the world
Dinamo Brest will play Astana, Celtic will play CR Reykjavik in the 1st round of Champions League qualification
Ronaldo can move to PSG. Mendes communicated with Leonardo (Foot Mercato)
De Ligt will miss 2-3 months due to shoulder surgery
Nagelsmann about the comparisons with Pep, Mourinho and Klopp: They are much more successful. I didn't win anything of note
Source https://www.theage.com.au/national/ivf-sector-in-limbo-as-public-hospitals-hit-pause-on-some-elective-surgery-20200716-p55cnl.html?ref=rss&utm_medium=rss&utm_source=rss_feed