Kangaroos coach Rhyce Shaw said he was keeping his fingers crossed that the knee injury forward Ben Brown suffered in the first-quarter against Geelong on Wednesday night was not too bad.

The out-of-form forward had been recalled to the team after being omitted from the team in round nine, but his game ended before quarter-time when he hurt his knee as he was tackled.

Shaw said the club would not know how serious the injury was until Brown had scans. 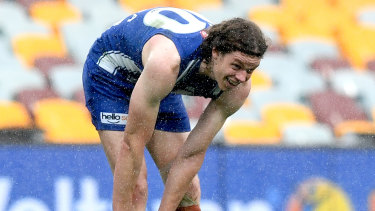 "It was obviously bad enough to keep him out of the game when he went off, but I haven't had much chat with the medical staff at the moment," Shaw said.

"We'll make sure we get across that as soon as possible, but we just hope for the best with Ben."

Brown's manager Adam Ramanauskas revealed on radio during the match that Brown had been battling bone bruising to his knee during the season when he has been out of form kicking eight goals in the previous eight games.

Shaw said Brown had been keen to rediscover the form that took him into second place in the Coleman Medal but it did not work out.

"He was really keen to go well, Benny, against a backline that's played together for a very long time and is really well structured," Shaw said.

"We needed all the bodies we could and Ben was certainly a main part of that without Nick Larkey and Curtis Taylor down there this week. That was really disappointing and put us on the back foot a little bit with our rotations."

Out-of-contract Brown is a chance to be placed on the trade table in the off-season as the Kangaroos look to rebuild their list under Shaw.

However, the coach said he hoped Brown would not miss too many games.

"He was up and about on the bench, which was a really good sign, but I haven't been told that there's anything too major," Shaw said.

"We'll just have to see what that looks like during the week, but fingers crossed it's not too bad."

Barcelona's Interest in Isak Increased after Koeman's appointment. Larsson has a high opinion of the player (Mundo Seportivo)
Manuel Pellegrini: When you play against Real Madrid and var, it's too much
PSV and Porto are Interested in Barcelona midfielder PUC. He doesn't want to leave the club
Puyol about Barcelona: If we want to win the championship, we need to perform very well
Schalke sacked Wagner. The team has not won the Bundesliga since January
Iacini on 3:4 with Inter: Even a draw would be an unfair result, given how many chances Fiorentina created
Ramos Pro 3:2 with Betis: the Referee tried his best and didn't do anything intentionally
Source https://www.theage.com.au/sport/afl/kangaroos-hope-brown-knee-injury-not-too-serious-20200805-p55iys.html?ref=rss&utm_medium=rss&utm_source=rss_feed

'No regrets': Skills needed in search for recession-proof work

’Up the Milk’ returns for the Raiders

On the trail of the positive messages posted around Hawthorn

From the financial world to living off the grid

Bound for glory: how a bunch of Hawk diehards bought the Batmobile

Who wins if federal leaders can't campaign in the Queensland election?

'Great memories': Raiders back with Canberra Milk as 2021 major sponsor

The insane rent of the ‘Friends’ pads today

'A bargain... in time': McCormack says $33m airport land buy will pay off

Kiwis may be able to travel to some Australian states before Christmas: Ardern

Dire decision could smash the economy

Weak start for ASX as banks, miners pull back; a2 Milk dives