For many, a power outage is usually just an inconvenience, requiring a (hopefully charged) phone to use as a light and perhaps a sudden end to the movie they were streaming.

But for others, it can pose a serious risk to their life, within a matter of seconds. 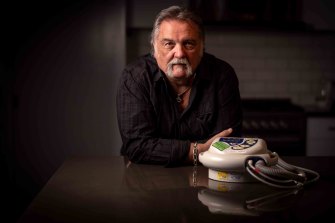 Boris Struk, whose son needs a ventilator, says power outages can be a life-and-death situation.Credit:Eddie Jim

Boris Struk’s son Ryan is among thousands of Australians using a life support machine that needs power to keep operating.

Ryan, 40, has muscular dystrophy and uses a ventilator 24/7. One is attached to his wheelchair, and the other sits beside his bed at the family home in Greenvale, in Melbourne’s north.

Without it, Mr Struk says his son would last about 30 to 45 seconds before he passes out from a lack of oxygen. "It is a life-and-death situation," Mr Struk said.

Because of this, the family have a back-up plan, which they had to quickly enact when there was an outage in their area earlier this year.

Ryan's ventilator is attached to an alarm, which sounded throughout the house to alert his father to the outage. They then switched to their back-up battery, which has about eight hours of power, with a generator on stand-by as a "last line of a defence".

Even with those safety nets, Mr Struk said it was a scary situation for his son.

"We were in the dark, literally, and had no idea whether it would be another half an hour or another five hours," he said.

"I wasn't particularly stressed, because I knew we had another back-up process ... but Ryan was starting to very much panic."

There have been tragic outcomes in Australia before.

Protections for people on life support were strengthened this year, with new regulations compelling energy businesses and distributors to keep accurate registers of their customers on life support.

The Australian Energy Regulator said the raft of regulations meant energy businesses should consider themselves on notice, and it recently took one of the big retailers to Federal Court.

The regulator has accused EnergyAustralia of failing to comply with life support requirements, alleging the company failed to properly register thousands of customers. In the latest development, the court ordered the company to complete the registration and notification process.

The regulator said the injunction occurred because the company failed to comply with an undertaking it gave to court last year to complete the registration.

The case follows previous action against several other companies, with nine infringement notices issued in 2018-19, including an $80,000 fine for TasNetworks and a $60,000 fine for Energex for alleged breaches of life support obligations.

"The obligations to register life support customers are critical to ensure continuity of energy supply and sufficient notice of any planned interruptions," she said.

In response to the allegations before the Federal Court, EnergyAustralia said it had improved processes to record registrations and automatically notified distributors when a customer told it they use life support.

"We want to assure customers that their safety remains our priority and we are committed to working with the regulator," a spokesman said.

Mr Struk said the requirement for all companies to notify life support customers about planned outages, and regular communication when an unexpected interruption occurred, was crucial.

Bartomeu met with Pochettino this week. He could replace Sethien at Barca
Salihamijic Pro 8:2 with Barca: Bayern are very happy, but they want more
Recently, Mueller did not want to renew his contract with Bayern. Now he's turning the football around
The baby may get angry and leave. Luis Suarez Miramontes about Messi
Joan Laporta: bartomeu's Words are a manifestation of cowardice and failure
Neuer on Ter Stegen: a Great result for Bayern, but I don't want my teammates to experience this
Messi is painful to watch. He did not help with goals and assists, in his eyes – hopelessness
Source https://www.smh.com.au/national/lives-on-the-line-energy-firms-on-notice-over-life-support-customers-20200703-p558rx.html?ref=rss&utm_medium=rss&utm_source=rss_feed

Meeting hub to give boost to hinterland community

IN PHOTOS: Women frock up for a cause at Mayor’s Luncheon