Manufacturers caught in energy crunch are ‘stressed and traumatised’

Manufacturers buying energy on the spot market are shouldering losses to keep customers, as they call on the federal government to secure gas reserves amid an east-coast price crunch.

Sanctions on Russia, outages in Australia’s ageing coal-fired power stations, and a blast of cold weather are fuelling a sharp rise in east coast energy spot market prices, with businesses fearing losing customers to overseas competition and warning costs will be passed onto suppliers and consumers. 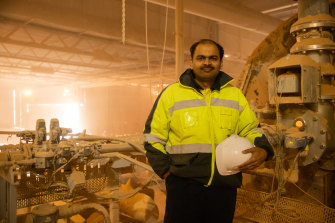 Causmag International, which manufactures a magnesium supplement for agricultural products from Young in NSW, is paying 350 per cent more for gas than it was two months ago after its wholesale gas provider, Weston Energy, collapsed.

“We are making losses to keep bare minimum business from our customers,” said the company’s director, Aditya Jhunjhunwala. “We are very stressed and traumatised by this, and we’re not the only ones.”

The federal government has promised action to ensure reliable and affordable energy supply, but cast doubt on using a mechanism to hold back liquefied natural gas exports for the domestic market because it would not take effect until January 1.

The response has frustrated manufacturers paying spot prices, who argue the government has the trigger to stop the situation they’re facing.

“The spot price is influenced by the future price,” Jhunjhunwala said. “If the government pulls that lever now and restricts exports of gas from next year onwards, it is bound to cause spot prices to collapse.”

Causmag is among previous Weston Energy customers now paying more than $44 a gigajoule with AGL Energy. Jhunjhunwala said the company had opted to pay spot prices to keep operations competitive when fixed prices escalated in 2016.

“Our competitors in China in this industry, they are mostly using coal gas, furnace oil and coal,” he said. “But in Australia, we are obliged to use gas because it’s a [clearer] burning fuel and it helps us meet our environmental norms.”

Energy-intensive businesses including foundries are anticipating increases to fixed-price contracts when they go to market again, while some paying spot prices are paying up to five times more for electricity.

Australia’s biggest foundry, Adelaide-based Intercast & Forge — which manufacturers iron castings for railways and the automotive sector — has been forced to halt production multiple times in the past two months due to price spikes, and met with its 170 staff on Thursday to discuss options for working irregular hours to lessen the blow of operating below break-even prices.

“We’ll still incur higher costs than what we like, but the long-term value of supplying customers is more important in the short term than just turning off,” said general manager Brett Lawrence, who is also Australian Foundry Institute’s national president.

He said the heightened power bill would lead the company to increase prices by up to 10 per cent, forcing costs onto suppliers and consumers.

“But arguably, it’s only if we can continue selling ... in some cases, because we export so much, we’ll get pretty quiet because we weren’t getting the orders,” Lawrence said.

“If people are whingeing about CPI in the last quarter, look out if this starts to be translated and be consistent across the board.”

Jhunjhunwala said it was ironic Australian natural gas exports would assist international competitors at the expense of local manufacturing.

“It’s crazy what’s happening here,” he said. “The solution has to be multifaceted. But if something can be done right away, it should be done.”