Making a vaccine for COVID-19 is a lot like tending to a garden.

You place your precious vaccine-seed somewhere warm, wet, dark and filled with nutrients. You carefully tend to it as it grows, trying always to find the perfect balance of water and fertiliser.

“You have to have enough of what they want and not too much of what they don’t,” says Professor Susie Nilsson. “You’re tending to it like a newborn.” 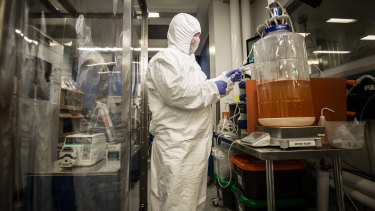 The CSIRO's Professor George Lovrecz at the Clayton manufacturing facility. The vaccine was grown in fermenters, shown right.Credit:Scott McNaughton

Australia’s first COVID-19 vaccine was designed in Queensland, but born in the non-descript surrounds of Professor Nilsson’s CSIRO lab in Clayton.

It is just one of many contributions Melbourne has made to the global fight against COVID-19.

Our southern city is Australia’s scientific powerhouse – it typically captures about half of all government research funds.

The city has a huge concentration of scientists; perhaps 10,000 researchers of different stripes, all working within walking distance of each other in the sprawl of research institutes in Parkville. When crisis loomed, they were ready.

“I’m biased. But I think Melbourne has made an outsized contribution. We have punched above our weight,” said Professor Shitij Kapur, dean of health sciences at the University of Melbourne.

We have led the way on basic research to understand what the virus does to our bodies. We have started work on promising new cures. And our epidemiologists have worked closely with government at every level, ensuring our public health response was among the very best in the world. 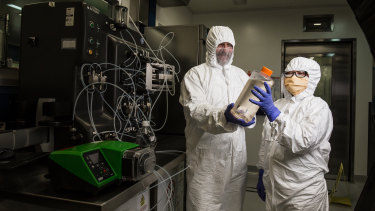 Professor George Lovrecz and Mylinh La at CSIRO's vaccine manufacturing plant in Clayton. They hold a bottle filled with cells that will be used to produce protein for the vaccine. Behind them is a machine that will eventually be used to purify the vaccine.Credit:Scott McNaughton

The University of Queensland’s ‘molecular clamp’ vaccine is filled with tiny proteins identical in shape to the spike protein SARS-CoV-2 uses to bind and enter human cells.

How do you make a protein? You grow it – in a vat.

All cells have tiny protein factories in them. Feed in genetic code and the factory makes a protein.

After the UQ team perfected the shape of their spike-mimic, they put that genetic code into a line of Chinese hamster cells, and sent the tiny, precious vial down to Professor Nilsson’s team.

At Clayton, the team grew that tiny seed into a huge batch of cells pumping out proteins.

But making enough vaccine to immunise millions of people requires those cells to be pumping out protein at peak production. Professor Nilsson’s team carefully tweaked the nutrient levels over and over, trying to get the mix right – while also racing against the clock, as cases and deaths piled up.

They delivered about 10,000 doses needed for the first patients to be injected at the University of Queensland in July.

“It’s an amazing feeling. You realise you’re contributing in real time to a process that could make a huge difference to many, many people’s lives,” she said.

Announcements from Moderna, Pfizer and AstraZeneca that their vaccines appear effective is good news.

But these vaccine developers are understandably focused on speed. Many scientists suspect these first generation vaccines will be good enough to save lives, but not good enough to end the pandemic altogether.

They think we’re going to need second-generation vaccines. That’s what Professor Colin Pouton and his Monash University team are working on.

UQ’s vaccine mimics the entire spike of SARS-CoV-2. Unfortunately, there are several other coronaviruses that infect humans (they typically cause colds). Their spikes look a lot like CoV-2s.

Professor Pouton suspects the immune systems of people who have been infected with a common coronavirus are likely to be making antibodies for those viruses – rather than COV-2.

“Young people are not suffering. Old people generally do suffer, and some are getting really seriously ill and dying. You have to figure out what is going on there,” said Professor Pouton. “We think older people have seen lots of coronaviruses in the past.

Professor Pouton’s solution: a vaccine that uses just the very tip of CoV-2’s spike, so there is no chance of crossed immune wires.

If it works, it could be administered to the elderly as a second-generation vaccine. They hope to begin clinical trials within six months.

None of these projects are possible without the basic science that unpicks exactly how COVID-19 invades our cells.

For much of that, we have Dr Irani Thevarajan’s Doherty Institute team to thank.

For years, they had been worried about a key pandemic problem: how do you fight a virus you know nothing about?

The key, they realised, was immediately getting top-quality data. To that end, they built a research project that could be activated as soon as a pandemic hit.

In January, when word reached our shores about a mysterious pandemic in Wuhan, they hit the button.

Their study, called SETREP-ID, managed to capture one of the first people in Australia with the virus, back before it even had a name.

Their study is about depth not breadth. They have tracked the course of COVID-19 through a person’s body in blood, stool and urine samples and close studies of antibody responses.

All those samples will be kept in a biobank, and the patients will be tracked for the next six months to monitor any long-term changes.

It’s unglamorous but vital work; some 16 research projects are using their data right now, and they helped publish the first-ever study of the immune response to COVID-19 in February - a big deal.

“I think it was a key contribution, when no one really had an understanding of this particular virus,” said Dr Thevarajan. “There were no other platforms in the country that were able to do this.”

Conte on 2-1 with Milan: Before the winning goal, the result was unfair. Their goalkeeper is the best player of the match
Mikel Arteta: Arsenal did everything right, but they lost. Wins give confidence
Nicolo Barella: We proved that we are stronger than Milan
Go do your voodoo shit, you little ass. Ibrahimovic-Lukaku during the Cup match
Pioli on the defeat by Inter: The only difference was the relegation. There could be any result in equal teams
UEFA has no plans to abandon the Euro in 12 cities. Other options are undesirable
Eriksen scored for Inter for the first time in almost six months - Milan in the Cup in the 97th minute from a free kick
Source https://www.smh.com.au/national/victoria/marvellous-melbourne-how-our-scientists-led-the-covid-fight-20201125-p56hwt.html?ref=rss&utm_medium=rss&utm_source=rss_feed

Hundreds of smokers fined after lighting up in cars with kids

Maritime museum is sinking because of Labor, opposition MPs say

Fleeced: how an AFLW skipper turned farming rouseabout during lockdown

Clever, funny and bent on mischief: Pixie is a dark, hilarious delight

Where a church costs as much as a used car

‘I did have a chat with him’: Brimmer the hero after Brebner blast as Victory snatch win

AFLW expert tips and teams, round one

Democrats in US Congress gear up for battle with Big Tech

Armie hints he was fired from Gossip Girl

Where HomeBuilder boom is heading

Your Daily Horoscope for Wednesday, January 27

ASX to slide; S&P and Nasdaq ease from record highs

Teen charged with murder of pedestrians

Teen charged with murder of two pedestrians in ‘horror crash’

A story of survival: Olga lost her family in the concentration camps

‘A shame on our city’: The yawning gap in lifespans across Sydney

Hummingbird Pauses for a Drink During Snowfall in Central Arizona

LIVE: Aussies may have to wait longer for NZ travel

Dynamic duo not loafing around with Coast’s newest cafe

Climate cost: State’s disaster bill to hit $60b a year

Teen arrested after neighbour traps him in garage