Rugby Australia chairman Hamish McLennan delivered a scathing assessment of New Zealand plans to limit Australia to two or three teams in a trans-Tasman competition, calling the dynamic between the nations "master-servant" as negotiations heat up over the future of Super Rugby.

McLennan paid tribute to the longstanding ties between the two rugby nations but said Australia needed the maximum number of teams in whatever replaced the ailing competition in 2021 and suggested New Zealand would be foolish to walk away from what Australia had to offer. 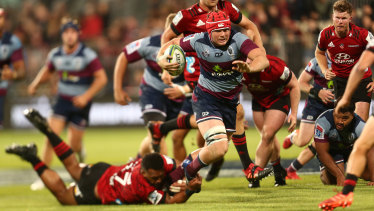 He was backed up the chairs of the NSW and Queensland Rugby Unions in a move to go it alone in an amped-up domestic competition, potentially featuring city and country sides from NSW and Queensland, the Western Force and a Big Bash-style injection of foreign talent from South Africa and Argentina.

"I love New Zealand and its people and we have strong cultural ties and a rich rugby heritage, but it feels a bit master-servant at the moment," McLennan said.

"If we're building up to the [2023] World Cup and rebuilding Australian rugby we need the maximum amount of teams in the competition, including our friends at the Force.

"From what I've heard, the Super Rugby clubs on both sides of the Tasman have been speaking and I hear they want a fullblown trans-Tasman competition as well.

Everyone would prefer a full trans-Tasman next year but we've got our own options and we're not going to be beholden to a one-horse race.

"What we have is a much larger population of 25 million and a bigger economy and it would be very sad if New Zealand didn't tap into that."

McLennan's comments came as New Zealand Rugby went into damage control over a Herald report the union was trying to strong-arm Australia into accepting a niche presence in an eight-team Super Rugby replacement.

The union's Aratipu strategic review has not been released publicly but various leaks have revealed it canvases the dismantling of the SANZAAR joint venture for all but Test rugby, and a professional competition featuring the five New Zealand teams, two or three Australian teams and potentially a Pacific Islands side.

NZR boss Mark Robinson said suggestions, floated by the Herald, that his board was divided on the way forward were "nonsense" and that he had been on the phone to his RA counterpart Rob Clarke on Thursday. The Herald has been told Robinson's early morning call broke a long period of silence from across the ditch.

"There is absolutely no division on our board whatsoever, it's absolute nonsense to suggest so," Robinson said.

"I talked to Rob Clarke this morning about a whole range of different things and the partnership, shared with him where we were getting to with timing. There's been good dialogue there.

"There's nothing we're hearing about what they would and wouldn't be open to at this stage."

NSW chairman Roger Davis and Queensland chairman Jeff Miller confirmed to the Herald they had been briefed by RA on proposals for alternative competition structures if New Zealand held fast.

"Everyone would prefer to be in a full trans-Tasman bubble next year but we've got our own options here and we're not going to be beholden to a one-horse race," Davis said. "We met with Rugby Australia this morning and we talked about alternatives and we are determined to pursue the best option for Australia. If the New Zealanders aren't interested we'll go our own way."

"If New Zealand don't get positive around the relationship they have with Australia that is their loss," Penney said.

"They probably see themselves in a powerful bubble, which they have done for a number of years. So be it. We'll create one here and then they'll come knocking I'm sure."

Latvian Stepanov is Wenger's worst transfer. Arsene did not understand that Bergkamp admired him for a joke – and signed
Berbatov – Bale: Gareth, I want to see you play football!
Arturo Vidal: Bayern are always the favourites, but Barcelona is the best team in the world
Kike Setien: Lewandowski is a great player, but he is not on the level of Messi
The great Milan of the noughties are already coaches: Gattuso is rebuilding Napoli, Shevchenko is going to the Euro, some are still at the club
The Premier League will not have a winter break in the 2020/21 season. Start-September 12, end-may 23
Liverpool have entered talks with Bayern over Tiago
Source https://www.smh.com.au/sport/rugby-union/master-servant-mclennan-whacks-new-zealand-super-rugby-plan-20200709-p55any.html?ref=rss&utm_medium=rss&utm_source=rss_feed